An anonymous ascetic reveals his relics in a dream

In 1982, on Tuesday of Bright Week, after the procession and blessing of the waters at the monastery arsanas (boat-house), two venerable Elders of the Holy and Great Lavra (Chrysostomos, later Bishop of Rodostolos, and Elder Vissarionas), took the boat for Ierissos and disembarked at the arsanas of the Serbian Monastery Hilandar. They were then taken to the monastery by a tractor which had been sent, and they paid a visit and spent the night.

The late Abbot Païsij, who was then a most virtuous and zealous hieromonk, welcomed them cordially and with great love.

When they were talking in the evening, the conversation came round to the unseen ascetics on the Holy Mountain, of whom, in recent times, there was a dearth.

Taking his cue from the direction in which the conversation headed, Father Païsij told the Lavriote fathers the following story:

‘When I was younger, the monastery sent me and another monk to the boundary between Hilandar and Esfigmenou in order to clear a path. We worked until quite late and returned late in the afternoon for Vespers, Compline and our spiritual obligations. In the evening, when I was asleep, I saw a monk I didn’t know who was nudging me in the side and telling me that, if we cleared another 20-30 metres further on, we’d find him, because that’s where he was’. 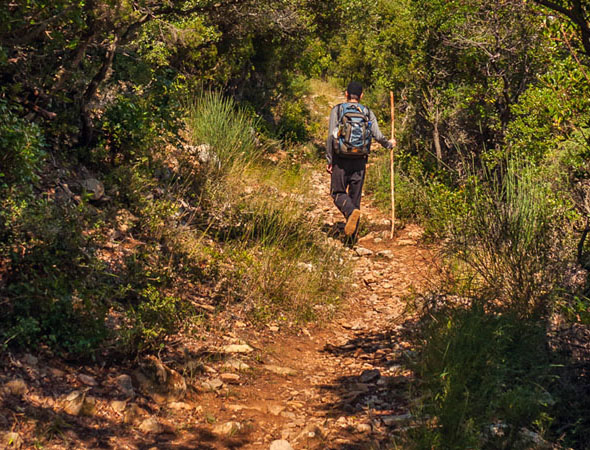 He then woke up and was wondering about the dream, about what the unknown monk might have wanted to reveal to him. The next morning, after the service, the two monks set off again to continue their labours. As they went along, Father Païsij told the other monk about the dream he’d had, and the latter said that the unknown monk who appeared must have been a holy ascetic who had lived in that place. When they got there, they cleared another 20-30 metres further on and didn’t come across anything. They then thought that they’d look in a radius of 20-30 metres to the left and right of the path, to see if they might find the unknown monk.

As they were looking through an almost impenetrable spot, they caught sight of something black behind the branches of the undergrowth. When they finally managed to pick their way through the branches, they came close enough to see that there was a cave. They went in and, to their astonishment, they saw the relics of a man stretched out on the floor. They said a trisayio (a short service for the departed) for his soul, completed their work and returned to their monastery, amazed at the strange revelation of this holy and unknown ascetic.

The Father Païsij mentioned in this piece was a lovely person. He was from Bosnia and I remember the first time I met him. I had a yellow shirt which I didn’t much care for and decided I’d dye it black to attend services on Athos. Unfortunately it came out rather dappled and Father Païsij burst out laughing and declared it ‘furgovano’, a word that none of the other Serbs had ever heard. He had been a clarinettist in a jazz ensemble before he became a monk and when he came to visit us once he was fascinated by a cassette of Indian ragas and asked for a copy. He was also a very serious monk and it was no surprise that he was elected, at a young age, to be the first abbot after Hilandar returned to the coenobium system. Alas, his family were slaughtered by Bosnian Muslims and he seemed never really to recover. He fell asleep in the Lord in 2002. May we have his prayers and blessing.

Hilandar is a very vital monastery. When Father Païsij was there, some of the other monks were Grigorij, who had been a motorcycle patrol in Belgrade and went on to become the Abbot of a monastery in the Holy Land; Father Chrysostom who had a riot of geraniums outside his kelli and declared that he never wanted to leave the Holy Mountain because it was so beautiful, yet ended up as a bishop in San Francisco and then Novi Sad; Father Arsenij, who fled to England after WWII and worked as a market gardener in Birmingham. He never spoke until he took the Great Habit and then never stopped; and Father Luke, a former steward on Canadian Pacific Airlines, one of the three truly gifted linguists I’ve met, and a formidable cook. Now there is a thriving brotherhood with another young abbot, Elder Metodije. (WJL)