Latterly, Frs. Dionysios, John and Pierre were joined by another monk, who was given the name Gedeon. He’d been to America and had worked in a factory in Philadelphia or Milwaukee, so he spoke some English, though it was patchy, and graphic in a pleasantly eccentric way. After the demise of the mule (see above), Elder Dionysios thought that it would be safer to get a jeep and Fr. Gedeon was assigned to drive it- for a very short space of time. Despite his protestations that he’d driven all over America without let or hindrance, it soon became obvious that he was a danger to himself and most of the flora and fauna in the vicinity and so the Elder revoked his licence. (I partly blame myself for this for not suggesting he be sent to the monastery at Ormylia to take lessons from Sister Chrysostomi, who, I’ve always felt, had another vocation as a Formula One driver). 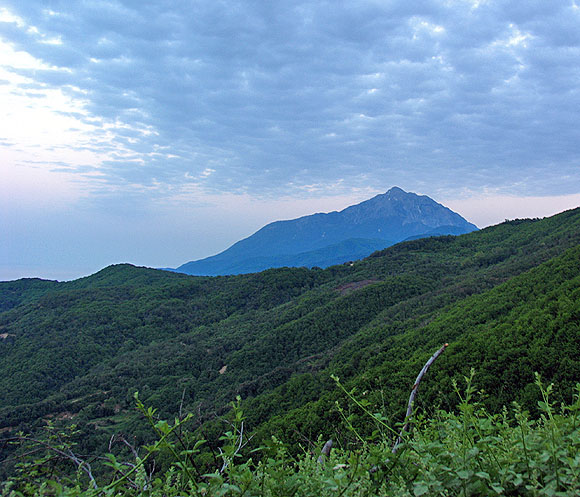 Mount Athos as seen from the road to Skete Colciu

Fr. Gedeon is associated with what I genuinely believe was a demonstration of the love of the  Mother of God for everyone who enters her Bower. Some twenty years ago I was going off on one of my regular pilgrimages, to Colciu as it happened, and, for the first time, my father-in-law expressed a wish to come with me. It was mid-summer and we left Karyes on foot to march along the dirt road to Vatopaidi. After a while, an open truck from the monastery overtook us, stopped and offered us a lift. We agreed and hopped on the back. Within seconds we were covered in the dust thrown up by the wheels of the truck. My father-in-law was Anglican and, as such, believed cleanliness was next to Godliness. He expressed the hope that he’d be able to enjoy an invigorating shower when we arrived. I knew that there was as much chance as finding a partridge in a pear tree there, so I  kept my own counsel. When we got to Colciu, Elder Dionysios said ‘Would you like a shower?’ The previous day, Fr. Gedeon had rigged up a shower in the garden using the rose from a watering-can as the head. I returned about six months later and there was no shower. I asked the Elder and he said: ‘No, it was useless. We decided to take it down just after you left’. 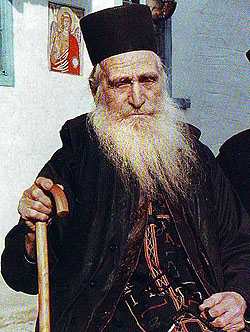 Elder Dionysios was held in very high regard by the Athonite community and was visited by Abbots and other monks who wished to learn from him. He entered the Holy Mountain in 1926, as a seventeen-year-old, and lived there for eighty years. He went to Colciu in 1937, to the kelli of the Holy and Great Martyr George and remained there for the rest of his life. In his last years, he lost his sight. Initially he was unhappy and said that it was like being condemned prematurely to the grave, but as time went by he came to regard it as a blessing, because it allowed him to concentrate more on his spiritual life without distraction. As he lay on his death bed he still retained his faculties. Father Pierre had returned from Canada, where he lives in isolation, and the new brotherhood told the Elder that he wasn’t to worry about the vines, because Father Pierre would take care of them. Elder Dionysios rallied immediately and said, ‘For goodness’ sake, don’t let him anywhere near them. He’ll mangle them’. 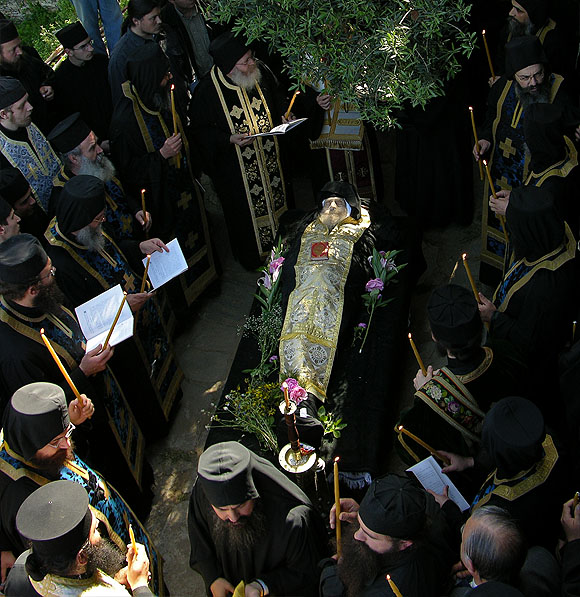 The funeral of Elder Dionysios

He was the youngest of eight children born in a village in Moldavia to a poor but devout father who died young. Yet when Elder Dionysios fell asleep in the Lord, his funeral was attended by, among many others, HRH Prince Charles. May we have his blessing. 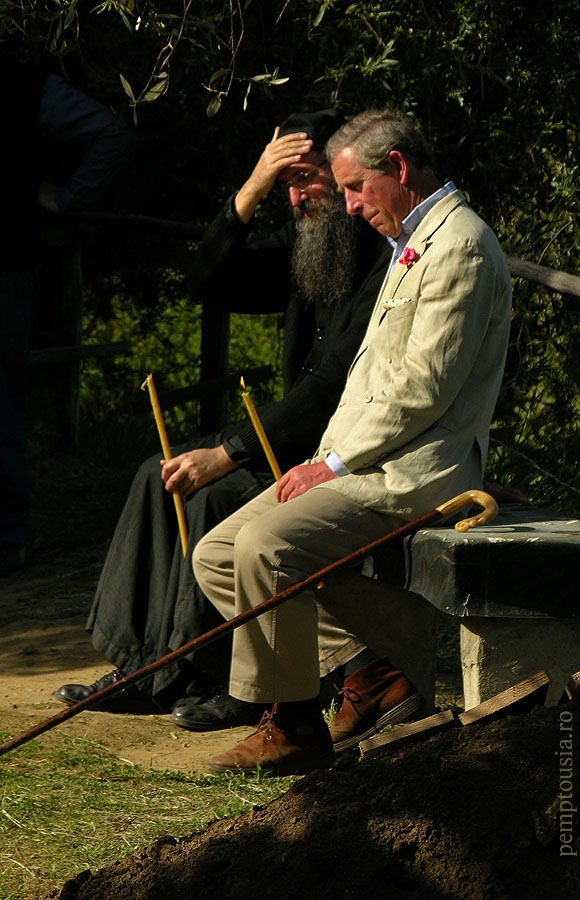 HRH Prince Charles at the funeral of Elder Dionysios