Joel Kalvesmaki is Editor in Byzantine Studies at Dumbarton Oaks, overseeing the production of Dumbarton Oaks’ flagship Byzantine publications, print and digital. He is active in the digital humanities and his research covers intellectual history in late antiquity, with a focus on ancient number symbolism and the writings of Evagrius Ponticus.

Since May 1993 I have been vigorously pursuing the faith of the Apostles as witnessed to by the early Church. This spiritual journey has led me, a strongly committed Protestant Evangelical, to seriously pursue conversion to either the Roman Catholic or Eastern Orthodox Church.

In the past years I have spent hundreds of hours reading, studying, praying, and discussing theological, historical, and philosophical issues with a wide range of people. I have taken the time to read over 3000 pages of the translated writings of Christians who flourished between 70-240 CE. Septuagintal studies have also played a major role as I have applied myself to understand more thoroughly the canon of Scripture, the process by which it came to hold authority for believers, and the way it treats itself. Later in my journey I spent considerable time meditating on epistemological and philosophical issues that helped to clarify and confirm my spiritual direction. Many of the answers to my questions have spawned others, which I still pursue. Yet I realise I cannot return to the Evangelicalism I have grown to love and cherish.

In a brief story like this I cannot justify every move, every doctrine, every insight. No matter how skilled my pen, I cannot explain in its full peculiarity the terrain I have explored, particularly if the skeptic is certain I’ve been to the desert and indulged in a mirage. Maybe so. But how to know without personal investigation? Most critics are content with armchair analysis.

All I can do is explain a little, as well as possible, to speed fellow Christian pilgrims on their way to a more consistent and honest faith and to stimulate those who have never bothered to consider the issues to take them up. Pilgrims are often a misunderstood part of our churches, yet their numbers are thin enough to warrant recruiting.

Before some of the theological issues, however, something of my life is helpful. 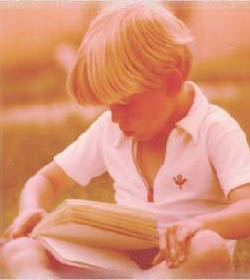 I was born into a loving Evangelical home where my mother and father, a Presbyterian minister, faithfully raised our family. Compared to others, there was little outstanding or traumatic in my upbringing. I had my share of skinned knees, split heads and spankings. Like every good pastor’s son, I slept through half the sermons and at other times egged my sister into laughter during the hymns. Only later, as I grew, I realized that such mischief is a luxury in a world of dysfunctional relationships. While friends in school spoke of the agony of broken homes, mine was wonderfully coherent.

When I was nine we moved from St. Louis to Salt Lake City, which was to be my home through high school. The most common association with Utah is, of course, Mormons (LDS), of whom I counted many my good friends. In elementary school my best friend was one of fourteen, the stereotypical burgeoning Mormon family. Only on the odd occasion do I remember religion becoming a conversation topic between us, but what was then unimportant was to later take on greater gravity.

My experience with the LDS was to serve as a constant touchstone. The Mormon Church is a daunting presence in the Intermountain West. With a membership of over seven million, their mission force exceeds 50,000, since a large number of their young men, before entering college, commit to tours of missionary service lasting 18 to 24 months, all funded by themselves and their family.

The LDS boast of the clean living of most members of their Church. Official Mormon teaching places great emphasis on family unity and patriotism. While their claim to low divorce and alcoholism rates is arguably flawed, they are at least as virtuous as any other given Christian church in America.

The picture is glossy and supremely Christian, until you look beyond appearances, into LDS theology. The differences are then difficult to ignore. Whatever godly image was set up by the Mormon Church quickly disappears as one explores the dark shadows of heresy. Of any group that claims to be Christian, Mormons are quite possibly the furthest removed from its historical doctrinal center. The Trinity is an aberration. God, once a man like us, is one of the many gods in the universe, like God himself, who now sires babies with his many wives to supply earth with human souls. We, by faithfully maintaining Mormon ceremonies and standards, can ourselves become gods.

In spite of this semi-fictional theology, the testimony many Mormons give is both personal and spiritual. The average active LDS will explain that at a certain age she read the Book of Mormon and sincerely prayed to know whether the Book of Mormon is true and Joseph Smith is a prophet. Many would attest to a powerful experience of a “burning in the bosom,” which would be understood as the Spirit confirming that, yes, the Mormon Church is the True Church.

Later in life, as my commitment to Christ solidified, I argued with Mormons. After I presented evidence challenging their worldview, some of them retreated, saying, “Why are you trying to destroy my faith? That’s all you anti-Mormons do is wreck other people’s faith.” This irked me. Had it never occurred to them that possibly their faith, based on nonsense, needed to be destroyed? Is our aim a secure faith, no matter what that faith may be? Or should we seek to test whatever faith we have and, if found false, change it? The Mormon way seemed a cowardly treatment of Truth.

My Walk with Christ

I have sought to be faithful to both Christ and my Christian leaders. At an early age I invited Jesus into my heart and was baptised by my father to the approval of many. The intense desire to serve Christ fluctuated, but was truly a part of the whole of my life.

Inevitably, my faith mingled with my strong artistic temperament. In high school I waged a critique of life that was deeply coloured by depression, loneliness and the searing question, “Why?” which few seemed willing to answer, let alone confront. Even in church I only saw a nominal practice of what was taken to be true. “People who don’t have Jesus in their hearts are going to hell. Forever. Want another cup of coffee?“

In this deep scepticism I spent a summer with a Youth With a Mission team that, by modelling the most radical of Christian virtues, helped to restore my trust in Christ, the Scriptures and the authentic reality of God in the life of the Church. Jesus’ words spoke freshly to my heart as I realised that He was to be Lord of all or not at all. My pining for eternity was answered by my leaders’ clarion call to full discipleship and devotion to God. While with the team I voraciously read apologetic books by men such as Josh McDowell and Walter Martin, all of whom seemed to answer some of the rawest problems I had with life, faith, and truth.

These early influences stirred into me an intense hunger for spiritual reality, balanced against a radical pessimism to truth claims. I wanted God, but without human error.

If people who are not born again are going to hell, there is no excuse for our lethargy. Sparked by this idea, I sought to be involved in pioneer Christian mission work. After leaving university early I joined Operation Mobilisation.[1] I was centrally concerned about the Muslim world, which I saw as the greatest threat to Christianity. Doctrinally, I felt I had sufficiently learned about and dealt with Mormonism and a handful of other Christian sects. Islam, however, seemed “uncharted territory,” possibly the most intricate and foreign of false religions. This led me to OM Turning Point, in London, England, a team that seeks to train Christians in evangelistic mission to Muslims in Europe and the Middle East. London has been my home from 1991 through 1995.

While I was searching for a good mission agency, my heart was caught by OM and its commitment to spiritual integrity, honesty and openness. The preaching of George Verwer spoke to me of a man and a mission that had a “hunger for reality” and sought a “revolution of love and balance.” This too was my goal: to die a soft-hearted and wise man who had committed himself to Christ and had raced after godliness.

I knew what kind of person I did not want to be. I learned this most clearly while I was in OM, when I learned of the deceit of Mike Warnke.

One of the most loved Christian entertainers in Evangelical circles, Mike Warnke would hold free concerts across the country to preach the Gospel in the context of a comedy routine. Mike’s reputation rested upon his dynamic and dramatic testimony. He had been a satanic high priest who, through a complex string of macabre events, finally found Jesus and was now born again. Evangelicals wholeheartedly loved him. His autobiography, The Satan Seller, was one of the best selling Christian books of the 1970’s. Through his books and an active concert circuit he assumed a prominent seat in the Christian entertainment industry as both a spiritual role model and an authority on occultism.

In 1993, however, in a 20,000 word article, Cornerstone, the flagship magazine of the Jesus People, exposed Mike for what he was. The Cornerstone article demonstrated that Mike had never been a satanist. He had never done most of the things he claimed for himself. None of his friends knew anything of his sinister midnight forays during college. And rather than being the Christian model of virtue he sold himself as, Mike had been married and divorced four times. He was greatly mishandling donations and using his position for his own gain. Little of what Mike had claimed stood up to reality.

Most people, sometime in their life, have their heroes fall and they learn an important lesson common to all. Luminaries who fall from grace grant us a time of soul-searching, to reassess our faith and to re-establish it upon a much stronger foundation. I went through this process and, realizing this would not be my last hero to fall, I focused my faith more on Christ.

The reaction from the Christian public, however, was more difficult to comprehend. Devotion to Mike was so strong amongst Evangelicals that letters responding to Cornerstone, rather than thanking them for the perspective to see beyond the sham, sharply criticised the authors. “How dare you judge Mike!” “When you can save as many people as him, then maybe you can point fingers.” “You are being very unloving and tearing down the body of Christ.” These were typical responses.

“These are the reactions of Christians?” I thought. I struggled with this. Which was worse, Mike’s deception or the Christian public’s self-deception?

This was certainly not the kind of man I wanted to be. I did not want to be attached to a symbol that contradicted its underlying reality or to defend the image at the expense of the substance. I wanted to deal with life as it is. Maybe I don’t see things very clearly, but I don’t want this to excuse me for concocting my own reality.

[1] Operation Mobilisation (OM) is probably the most international of Evangelical mission organisations in the world, with 2700 adults working in 65 countries. Their emphasis is to work in Europe, the Middle East, and the Indian Subcontinent, as well as to minister through their two ships, the Doulos and Logos II. Although not known extensively in the U.S. they are well-established and well-known in Evangelical circles in northern Europe, India, and South Korea.