They said of an old man that he went on fasting for seventy weeks, eating a meal only once a week. He asked of God the meaning of a text of the Holy Scriptures and God did not reveal it to him. So he said to himself: “Here I am: I have worked so hard and profited nothing. I will go to my brother and ask him.” Just as he had shut his door on the way out, an angel of the Lord was sent to him; and the angel said: “The seventy weeks of your fast have not brought you near to God: but now you are humbled and going to your brother, I have been sent to show you the meaning of the text.” And he explained to him what he had asked, and went away. “The Sayings of the Fathers” in Western Asceticism (by Chadwick)

As Orthodox, we rightfully honor our ascetics and hermits. We honor the way they “leave” the world in order to devote themselves to prayer, to learn to know God better, and to learn how to live a holy life. But, sometimes we talk about them in a way that appears to say that they are self-sufficient in their separation from the world. 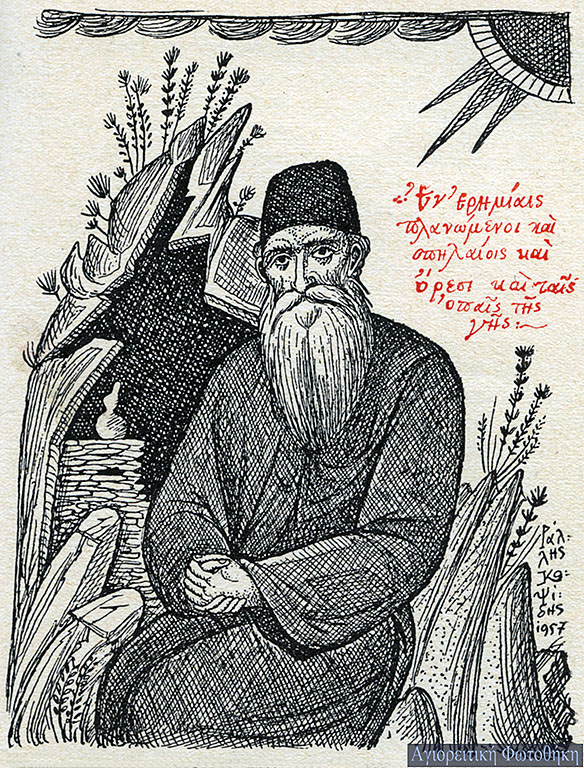 Elder Philaretos of Karoulia (1872-1962) was a renowned ascetic from Holy Mountain Athos. Drawing by Rallis Kopsidis

But, when you read the Fathers, that is not the point they make. The first part of the story of the old man that I quoted at the beginning pictures an ascetic the way we often picture one. The old man apparently was doing everything correctly. He was eating once a week; he was praying; he was fasting; he was reading Scripture. He fasted for seventy weeks, which reminds one of the seventy weeks of Daniel.

But, that is not what the Fathers say to us. The old man did not receive a visit from an angel until he knew that he had to go to his brother to ask for help. It was only when he recognized that he needed his brother that God was willing to answer him. Even the ascetic needs the Church.

I learn two things out of this story. The first is that I need the Church. I cannot be self-sufficient and be a Christian. I cannot simply say that I pray to God and read the Scriptures, so I do not need to go to Church and be with my brothers and sisters. Without my brothers and sisters, God will not bless me. It is only as part of the Body of Christ that I receive blessing.

But, the second thing I learn is that no Scripture can truly be correctly interpreted by me alone. I need my brothers and sisters if I am to understand Scripture correctly. It is only when Scripture is interpreted by the Body that God’s angel will be with us to guide us to the correct interpretation.

Finally, I learn that humility is necessary. It is not until I humble myself and submit myself to my brothers and sisters that I will truly learn from God. God dwells with the humble of heart. As Saint Paul says in Ephesians, we need to submit ourselves one to another that we may know what the true will of God is (Ephesians 5).