Saint Paisius Velichkovsky was born in Poltava in Ukraine on December 21, 1722, and was the eleventh of twelve children. His father John was a priest, who named him Peter at his Baptism, in honor of St Peter the Metropolitan of Moscow, on whose Feast he was born.

After the children’s father died, their mother Irene raised them in piety. Peter was sent to study at the Moghila Academy in Kiev in 1735. After four years, Peter decided to leave the world and become a monk. At the age of seventeen, he went in search of a monastery and a good spiritual Father. For seven years Peter visited various monasteries, including the Kiev Caves Lavra, but he did not feel drawn to any of the monasteries of Ukraine. 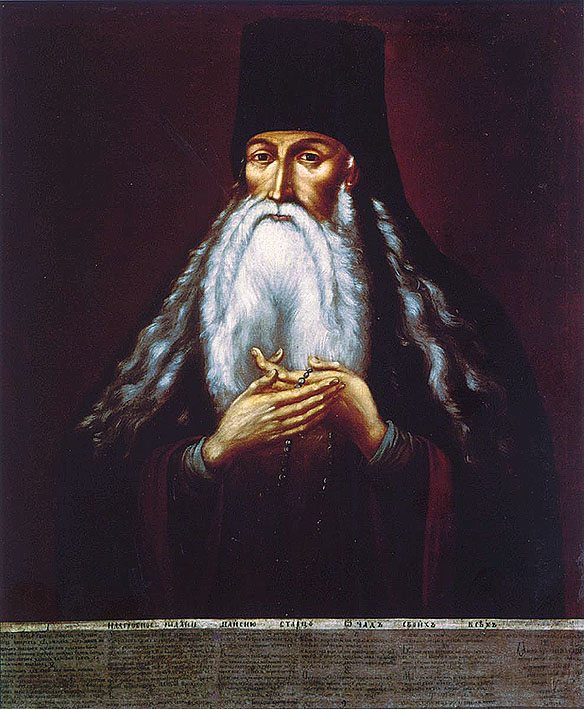 After being made a rassophore monk (one blessed to wear the rasson, but not yet tonsured “into the mantle”) at the St Nicholas Medvedevsky Monastery with the name Platon, he found that there was no experienced Elder there who could teach him obedience or give him spiritual direction. Not wishing to begin his monastic life without such guidance, he left the monastery a week after his tonsure with the blessing of his Elder.

At first, he went to Kiev, where he happened to meet his sister-in-law, the widow of his older brother Archpriest John. She informed him of his mother’s sorrow when he left Kiev, and her mind seemed to be affected by her grief. Then one day an angel appeared to her and told her that instead of loving the Creator with her whole heart and soul, she loved His creation (her son) more. Because of this excessive love, the angel went on, she was thinking of starving herself to death, which would result in her eternal condemnation. The angel said that by God’s grace, her son would become a monk, and that she should also renounce the world and become a nun. After this, she became calm and accepted God’s will. She entered a convent and was tonsured with the name Juliana. After about ten years, she departed to the Lord.

While at Kiev, Platon met two monks from Romania who were about to return to their country. After crossing the border into Moldavia, they came to Vlachia and the Skete of St Nicholas, which is called Treisteny, around 1745. The Elder of the Skete, Hieroschemamonk Michael, was away on business in Ukraine, so Platon and his companions were welcomed by the Superior, Fr Demetrius. Platon was placed under a general obedience and given a cell near the Skete, from which the church was visible.

As he was sleeping one night, the semantron was sounded calling the monks to Sunday Matins, but Platon did not hear it. He woke up and ran to the church, only to find that the Gospel had already been read, and the Canon was being sung. In his grief and shame, he did not enter the church, but returned to his cell and wept bitter tears. After the Liturgy, when it was time for the meal, the Superior and the Elder were surprised that Platon had not been seen at the services. The Elder ordered that the meal be delayed while he sent a Fr Athanasius to find out what had happened to Platon. Fr Athanasius found him and asked why he was weeping. With difficulty, Platon was able to tell him the cause of his sorrow. Fr Athanasius tried to console him and urged him to come to the Skete, where the others were waiting for him. Finally, he was persuaded to go.

Seeing the brethren at table but not eating, Platon fell down before them weeping and asking forgiveness. The Elder and the Superior lifted him up and heard from Fr Athanasius the reason for his sorrow. The Elder told Platon not to grieve so over something that had happened involuntarily, and did his best to console him. From that time, however, the saint would not sleep lying down in bed, but sitting up on a bench.

One day the Elder Onuphrius of Kyrkoul visited the Skete and spoke about his Skete at Kyrkoul. Platon long to see Kyrkoul, and so he returned there with Fr Onuphrius. He remained there for a time, conversing with Fr Onuphrius about overcoming the passions, the struggle with demons, unceasing prayer, and other soul-profiting topics. This seed fell on good ground, later bearing spiritual fruit a hundredfold.

The time came when Platon was filled with a longing to visit Mount Athos. He asked the brethren of the Skete, and those of other Sketes, for their forgiveness and blessing for the journey. He also thanked them for their kindness and their paternal instruction. They blessed him and let him go in peace. At that time he was just twenty-four years old.

Platon went to Mount Athos in 1746, arriving at the Great Lavra on July 4, the eve of the Feast of St Athanasius of Athos. His traveling companion, Hieromonk Tryphon fell ill and died after four days. Platon would have died from the same illness, if not for the care of the Russian monks. He recovered and lived in solitude in a cell called Kaparis near the Pantokrator Monastery. He went around visiting the ascetics and solitaries, looking for a spiritual Father, but was unable to find anyone suitable.

In 1750 St Basil of Poiana Marului (April 15) visited the Holy Mountain and spent some time with Platon, who asked him for monastic tonsure. Elder Basil granted his request, giving him the name Paisius. Then Fr Basil returned to his Skete at Vlachia. About three months later, a young monk named Bessarion came to the Holy Mountain from Vlachia. He went around to the monasteries searching for an instructor, but did not find one. He also came to Fr Paisius and asked him to tell him something about saving his soul. Fr Paisius sighed and told him that he himself had been looking for an instructor without success. Yet, feeling compassion for Fr Bessarion, he talked to him a little about the qualifications necessary for a true instructor, and about the Jesus Prayer. After hearing him, Fr Bessarion said, “What more do I seek?” He fell down at the feet of Fr Paisius, entreating him to be his Elder. Fr Paisius did not want to be anyone’s Elder, wishing instead to be under authority himself. Fr Bessarion remained for three days weeping until Fr Paisius agreed to accept him as a friend, and not as a disciple. For about four years they lived together fulfilling God’s commandments, cutting off their own will and obeying one another as equals.

Other disciples began to join them, and their number continued to increase. Since they needed a priest and a confessor, they begged Fr Paisius to accept ordination. He did not want to hear of this, and repeatedly refused to consent. They did not give up, however. They asked him how he could expect to teach the brethren obedience and cutting off their own will, when he disobeyed the tearful entreaties of those who wanted him to accept. Finally, he said, “May the will of God be done.”

In 1754 Fr Paisius was ordained to the holy priesthood and was given the Skete of the Prophet Elias, where he began to accept even more disciples. St Paisius remained on Mt Athos for a total of seventeen years, copying Greek patristic books and translating them into Slavonic.

In 1763 Fr Paisius went to Moldavia with sixty-four disciples, and was given the Dragomirna Monastery near the city of Sochava and on the border between Bukovina and Moldavia. Here he remained for twelve years, and the number of monks increased to three hundred and fifty. His friend Hieromonk Alexius came to visit him from Vlachia, and Fr Paisius asked him to tonsure him into the Schema. Fr Alexius did so, but without changing his name. While at Dragomirna, Fr Paisius corrected the Slavonic translations of patristic books by comparing them to the Greek manuscripts he had copied on Mt Athos.

The Russo-Turkish war broke out in 1768, and Moldavia and Vlachia saw many battles. Dragomirna and the forests around it became filled with refugees from the villages near the battlegrounds. Another catastrophe appeared in 1771 with the outbreak of plague. When Dragomirna and Bukovina came under the control of Austrian Catholics, St Paisius and his flock fled to Moldavia. In October of 1775, he went to Secu (“Beheading”) Monastery, which was dedicated to St John the Baptist, with many of his monks.

Secul was too small for the number of brethren, who were crowded with three to five monks in a cell. In the spring, more brethren were due to arrive from Dragomirna, so new cells had to be built. After three years of labor one hundred cells were completed, and everyone had a place. Still, the numbers increased and they had to look for a larger monastery.

Prince Constantine Muruz wrote to the Elder saying that there was no larger monastery than Neamts, about two hours from Secul. On August 14, 1779, St Paisius moved to Neamts Monastery where he spent the last fifteen years of his life translating the writings of the Holy Fathers. He organized the community according to the Typikon (Rule) of Mt Athos. He gathered about a thousand monks in the monastery, instructing them in the unceasing prayer of the heart.

Archbishop Ambrose visited St Paisius at Neamts in 1790, staying for two days to converse with the Elder. During the Sunday Liturgy, he raised St Paisius to the rank of Archimandrite. He remained two more days, then departed after blessing everyone.

St Paisius fell asleep in the Lord on November 15, 1794 at the age of seventy-two. It is possible that God revealed the date of his death to him beforehand, for he stopped translating books. He only reviewed and corrected what had already been translated.

He was ill for four days, but felt well enough to attend the Liturgy on Sunday. After the service, he asked everyone to come and receive his blessing. He said farewell to them all, then returned to his cell and would not receive anyone. A few days later, on November 15, he received the Holy Mysteries again and surrendered his soul to God. His funeral was conducted by Bishop Benjamin of Tuma, and was attended by multitudes of priests, monks, laymen, nobles and ordinary people. 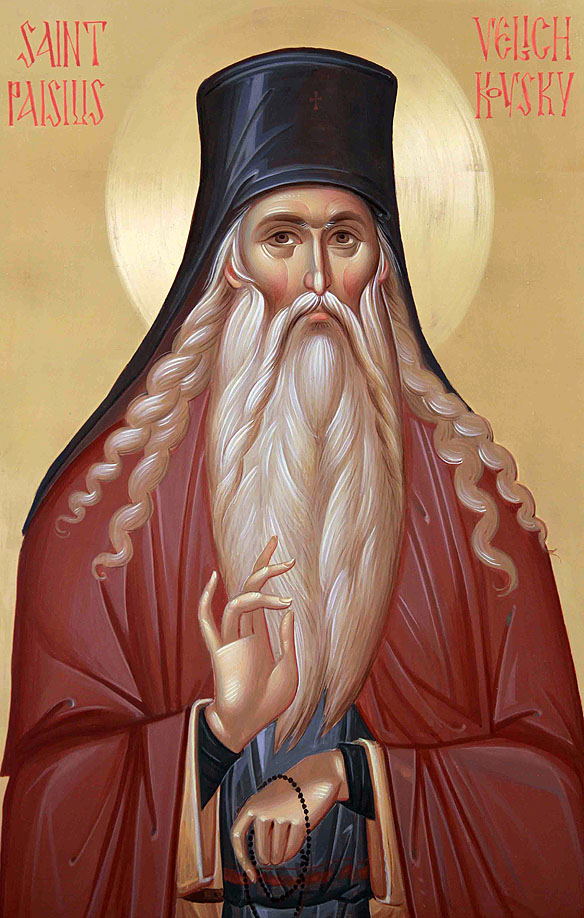 St Paisius has had an enormous influence, not only in Romania, but throughout the Orthodox world. His disciples traveled to Russia, sparking the spiritual revival of the nineteenth century with Slavonic translations of the PHILOKALIA and the tradition of eldership which they had learned from St Paisius. This influence has been felt even in America through St Herman of Alaska (December 13). St Herman was taught by Elders whose spiritual formation was guided by St Paisius. He first met Fr Nazarius, who became his Elder at Valaam, at Sarov, then followed him to Sanaxar when St Theodore (February 19) was their igumen.

One of the books that St Herman brought with him to America was the Slavonic PHILOKALIA, printed in 1794. He absorbed the spiritual wisdom that it contained, and imparted it to others.

Having become a stranger on earth, / you reached the heavenly homeland, venerable Father Paisius. / You taught the faithful to lift up their minds to God, / crying out to Him with all their hearts: / “Lord Jesus Christ, Son of God, have mercy on me a sinner!”

Like a much-laboring bee, you were an elect zealot of the monastic life, / supplying our souls with the writings of the Fathers through which you guide us on the path of salvation. / Therefore we cry out to you: “Rejoice, truly-wise Paisius, / for through you the tradition of spiritual elders has been restored to us!”