Was there ever a truly natural city? The Byzantines thought so

In an age that emphasizes sustainable urbanization and green growth in cities across the globe, it makes sense to look to the past to see if human beings have ever really attempted, much less achieved, a truly “natural” city—one in which the human and the natural were connected so that both would thrive. As it turns out, new research suggests that Constantinople may have been such a city, at least in the aspirations of its inhabitants.

A medieval mural in the Istanbul Archaeology Museums depicting the seaward walls of the Byzantine capital. Wikimedia

From ancient times, the Greeks believed humans could achieve their full potential only within the context of a city, and perhaps no city built by Greeks more fully reflected their ideal of the polis as the crucial element of paideia (the formation or education of the citizen) than Constantinople. The heart and soul of the Byzantine Empire, Constantinople was the nexus of East and West, Empire and Church, heaven and earth, man and nature, the old and the new. Even after the Muslim Turks conquered the city in 1453 and up to the present, Constantinople, now known as Istanbul, has been a bridge between two worlds, whether it is Europe and Asia, the Islamic world and the West, or the modern and the traditional. Although the Byzantine capital ceased to exist more than five centuries ago, the legacy and spirit of Byzantium have continued and may even have important lessons for city dwellers today.

In The Noetics of Nature: Environmental Philosophy and the Holy Beauty of the Visible,  Bruce Foltz asks whether Constantinople was in fact such a “natural city.” Foltz, a professor of philosophy at Eckerd College, examines not just the built environment and the civic structures put in place by the Byzantines, but also the deeper cultural and philosophical systems that formed  their vision of what a city should be. Constantinople, he points out, was founded as a “sacred city” that celebrated the connections among the divine, human, and natural realms as an integrated whole. Foltz says that for Byzantine Christians,

[T]he Fall is a disorder of the whole cosmos…[and] redemption…[is] a restoration of humanity and nature alike…returning them to their paradisiacal state….Humanity [is to be]…that being through which the divine image within all creation becomes fully realized, the nodal point through which creation apprehends and consecrates its own inner divinity.

For Orthodox believers, there was an intimate connection between man and nature expressed and experienced not just on the individual or even communal level but also through the imperial city itself. Constantinople, the golden city, shone as the beacon and the paradigm for those living throughout the Byzantine realm and beyond. 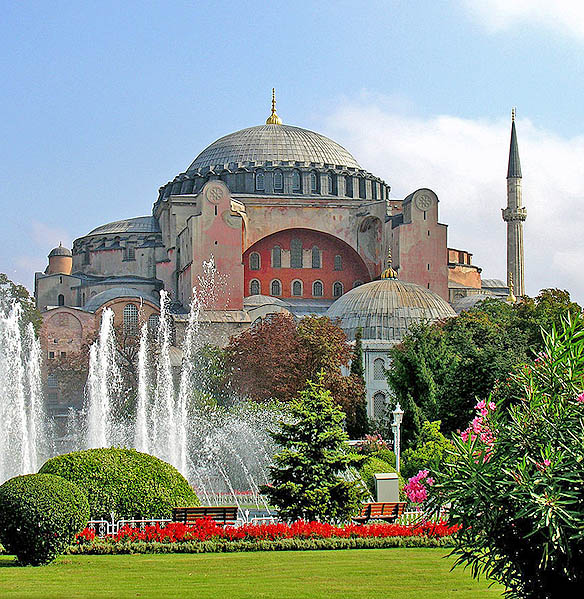 The focal point of Constantinople was Hagia Sophia, Church of the Divine Wisdom, considered by many to be one of the great wonders of the world because of its scale, complexity, and beauty. The function of this architectural wonder was to symbolize the Byzantine understanding of the relationship among God, man, and nature, and to reveal their coming together in space and time. As  Foltz describes it,

The Divine Wisdom is the eternal Logos, seen as shaping the cosmos and holding it together. It is thus also the inner logos of each being that, when fully realized, joins it to the whole in a love that must be understood ontologically.… The Great Church of the Divine Wisdom, then, itself serves to bring together all elements of the cosmos in a transfigured form, making manifest the inner glow of their divine beauty. 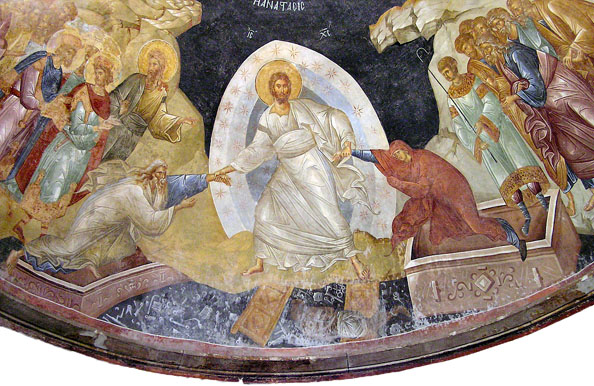 Anastasis or Resurrection of Christ, icon from the funerary chapel at Chora Church, an outstanding example of Byzantine architecture and iconography in Istanbul; Wikimedia

When the citizens of Constantinople came together in worship, they entered a space intended to bring together heaven and earth, and they  prayed “on behalf of all [living things] and for all.” Their liturgies were not only for the spiritual edification of individuals in the congregation but also for the renewal of a vision of the natural order, indeed of the entire cosmos, as something sacred, a gift from God given to mankind to treasure and protect. It was a bringing together of both present time and the future Kingdom of God in which humans and all of nature would reach their fullest potential in the image of the divine. Byzantine worship, through its mystical music and elaborate symbolism, also depicted the city as Heavenly Jerusalem, one that the earthly city of Constantinople was to emulate and that Byzantine rulers and citizens alike should strive to achieve. The belief was that a strong, vibrant, and (to the extent possible in this fallen world) “holy” Constantinople, a truly “natural” city, could link humans and nature, the divided races of man, and Heaven and Earth.

The practical ramifications of this ideal play out in a number of ways. For example, historians Stephen Barthel and Christian Isendahl have demonstrated that Constantinople’s urban gardens, agriculture and water management systems were more efficient than those of many modern cities, in large part because of “the close connection between urban people and their life-support systems,” a concept which they argue must be reignited among urban dwellers today.

There were multiple reasons why this grand urban experiment eventually came to an end, as Steven Runciman and Donald Nicol have chronicled so well in their now-classic works on the subject. The Constantinopolitan model for a city may also be a hard sell in today’s world, particularly in the secularized West where the Byzantine concept of symphonia – a system in which  political and religious leaders work in unity to provide the material and spiritual needs of the people – is rejected outright. Still, to the extent that it can serve as a model of a natural city, Constantinople remains a useful paradigm for us today. Foltz may be right when he concludes that:

Byzantium may nevertheless remain for us in the West, heirs to both Athens and Jerusalem, the exemplary bridge between the secular and the sacred, the temporal and the eternal, between the visible and invisible: the once and future natural city.

The true lesson of the Byzantines, so crucial to us today, is their understanding of the connection between mankind and nature. We can learn from Constantinople that the world around us is composed of living things, not just dead matter for us to take and exploit to make products that we then set before ourselves in an elusive search for meaning and happiness.

Andrew Sharp is Research Scholar at the University of Virginia’s Institute for Advanced Studies in Culture, where he serves as the Thriving Cities Project Manager, and Affiliate Assistant Professor of Religious Studies at Virginia Commonwealth University. His publications are in the areas Eastern Christianity, Islam, and Muslim-Christian relations and his book is Orthodox Christians and Islam in the Postmodern Age (Brill, 2012).

Source: The Hedgehog Review, Institute for Advanced Studies in Culture | University of Virginia