St. Maximus was born in the late 6th century, in Palestine – according to the earliest version of his life. He was well-educated, and served the Emperor Heraclius (610-641) for a time at the Byzantine Imperial court. It was at this time that the Patriarch of Constantinople, named Sergius (610- 638), who was a great patriot of the Byzantine empire – really he was more of a pat-riot than a theologian – it was at this time that he began, with the sup-port of the emperor, to develop the teaching on only one divine “energy“ or “operation“ in Christ – a teaching that was soon to evolve into the teaching I already described, of one “will“ in Christ, called Monotheletism. 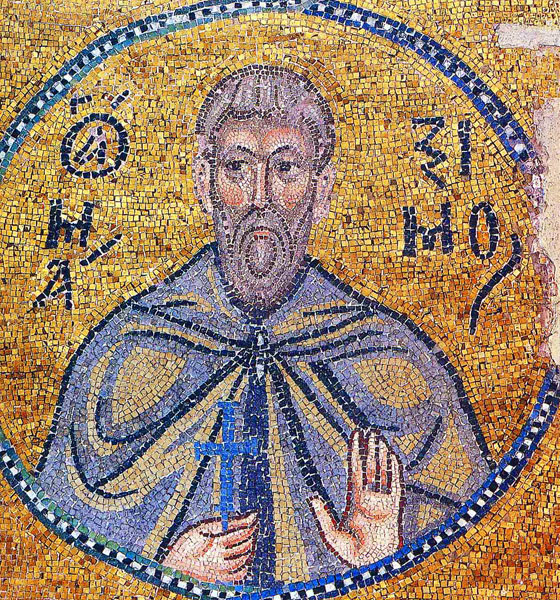 The motivations for developing this teaching were both political and theological. On the one hand, there was the hope that perhaps the teaching on “one will“ could serve as a compromise to attain union with the so-called Monophysites – these were large groups of people who left the Church of Constantinople because they disagreed with the teaching on the “two natures“ of Christ. These people who left the Church of Byzantium, also ceased to be loyal to the Byzantine emperor, which was a political problem. So winning them back theologically was also important politically, for the unity of the Empire.

But there was also sincere theological confusion regarding the human will of Christ. Because the human will and its operation or movement did not have a good reputation in an-cient thinking. I don‘t want to bore you with too many details, zillions, but it is important to know that theologians at this time were still influenced by Origen, the Alexandrian theologian of the 3rd Century, who considered movement in general, Kinesis, including the movement of the will, a bad thing; a falling away from what he imagined was the original, ideal unmoving state of souls, Stasis, which Origen imagined existed before the creation of the visible world. According to Origen‘s thinking, it was the movement of souls that was their fall, and necessitated the creation of the material world, called Genesis.

So, according to this vision of things, – the material world is the result of sin, of a fall from perfect stillness. When St. Maximus began to battle the teaching of Monotheletism, as he did, he had to deal with these Origenist ideas, in which he himself was well-educated. And deal with them he did, beca-use Maximus “corrected“ Origen‘s teaching on the origins of the world, or his cosmology, as follows: Maximus explained that first came “Genesis“, God‘s creation of the world, as a movement of His divine will. – So that‘s a good thing. And as a result, as a reply to God, comes creation‘s movement or Kinesis toward God. And finally, creation strives, we all strive, through this movement, to achieve Stasis, or rest, in God.

Thus, Maximus shows how movement, including movement of the human will, is a good thing. Maximus was also very insistent that this process of our movement towards God is made possible through the Incarnation, i.e., through the bringing together of the human and divine natures in the One Person of Jesus Christ.

Through communion with that Person, the God-Man, we proceed on the path of our own divinization or Theosis, by working together, in synergy with His will. Synergy is an important word here. And – even when our free will turns in another direction, or ceases to strive toward God, we know that the door remains open for us again to change direction, to change our mind, and accept the grace of repentance, or metanoia, which is so often described in the Gospel.

St. Maximus did not live to see his theology triumph against the teaching of Monotheletism, which, during his life-time, was embraced not only by the Emperor, but by the majority of the bishops in the East. Maximus actually found support in Rome, from a Pope, St. Martin (+655), but eventually both Maximus and St. Martin were arrested and subjected to torture and exile for their uncompromising stance against the teaching that degraded the human will. 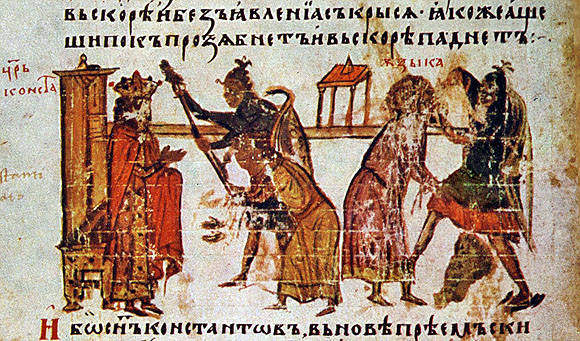 The martyrion of Saint Maximus and his accolites. Slavonic manuscript, 14th Century

Saint Maximus died in exile in 662, after enduring enormous pressure and torture from imperial and church authorities, including, finally, having his right hand severed and his tongue cut out. 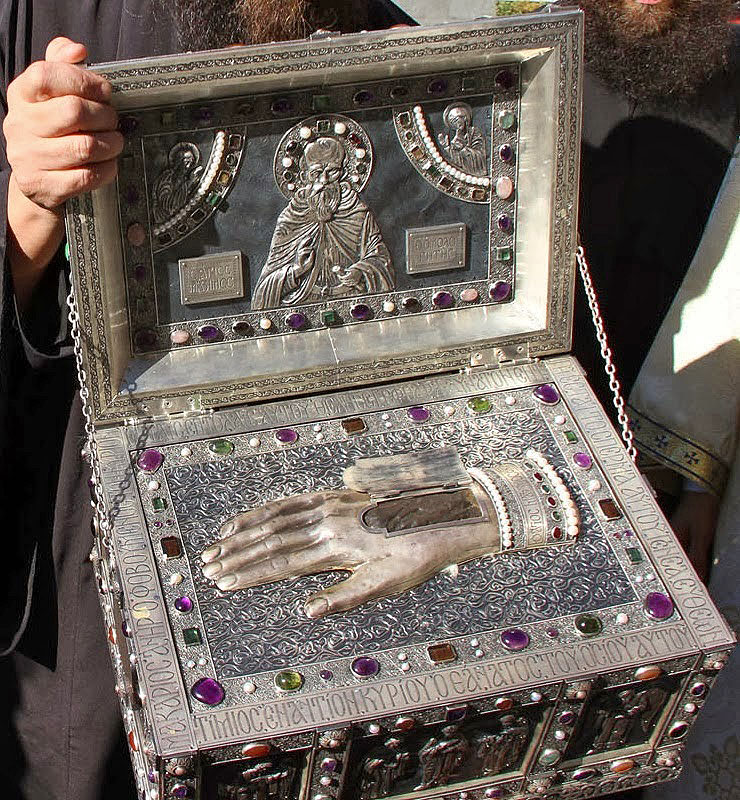