The Mystery of Baptism 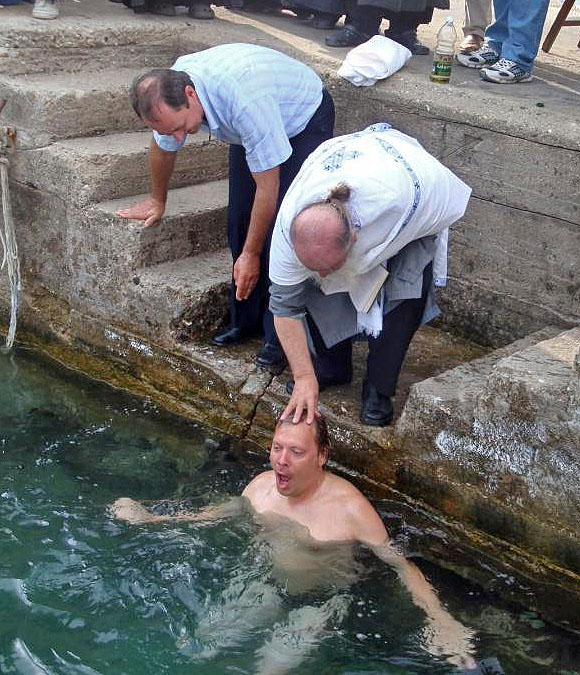 Baptism of an adult in the sea. Holy Mountain Athos

Scholia by Metr. Hierotheos of Nafpaktos: The Mystery of Baptism is the ‘introductory Mystery’ by which someone enters the Church. Christ Himself commanded His Disciples to baptize all those who believed in Him.

Fr. John Romanides: And Jesus came and spoke to them, saying, All authority has been given to Me in heaven and on earth. Go therefore and make disciples of all the nations, baptizing them in the name of the Father and of the Son and of the Holy Spirit, teaching them to observe all things that I have commanded you; and lo, I am with you always, even to the end of the age. Amen (Matt. 28:18-20).

Metr. Hierotheos of Nafpaktos: The Apostle Paul links the Mystery of Baptism with the death and Resurrection of Christ. Through Baptism the Christian dies with regard to sin and lives a resurrected life according to Christ.

Fr. John Romanides: Or do you not know that as many of us as were baptised into Christ Jesus were baptised into His death? Therefore we were buried with Him through baptism into death, that just as Christ was raised from the dead by the glory of the Father, even so we also should walk in newness of life. For if we have been united together in the likeness of His death, certainly we also shall be in the likeness of His resurrection, knowing this, that our old man was crucified with Him, that the body of sin might be done away with, that we should no longer be slaves of sin. For he who has died has been freed from sin. Now if we died with Christ, we believe that we shall also live with Him, knowing that Christ, having been raised from the dead, dies no more. Death no longer has dominion over Him. For the death that He died, He died to sin once for all; but the life that He lives, He lives to God. Likewise you also, reckon yourselves to be dead indeed to sin,but alive to God in Christ Jesus our Lord” (Rom. 6:3-11). 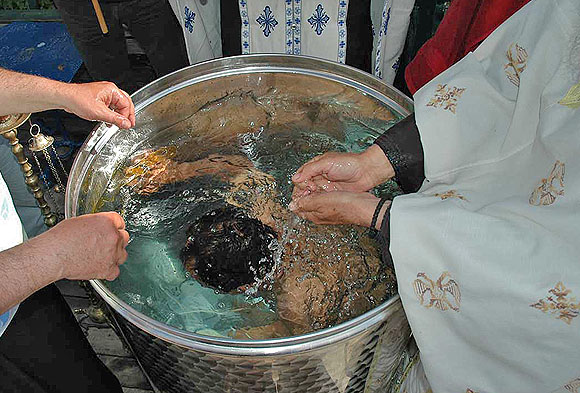 Of course Baptism, together with all the Mysteries of the Church, is not simply a formal rite but a Mystery in the highest sense, through which man shares in the uncreated grace of God. This presupposes, however, personal participation on man’s part. God acts and man collaborates. Before Baptism there is instruction in the faith, and this is not simply teaching but a journey of spiritual regeneration. Before Baptism catechism took place, which was linked with exorcisms that dismissed the devil and demonic powers (energies) from the candidate’s heart. Canon 7 of the Second Ecumenical Council refers to this:

“On the first day we make them Christians; on the second, catechumens; then on the third day, we exorcise them, breathing thrice into their face and ears; and thus we catechise them, and make them spend much time in the Church, and listen to the Scriptures, and then we baptise them.”

Metr. Hierotheos of Nafpaktos: Catechism prior to Baptism took place within this framework.

Fr. John Romanides: When we are baptized, if we read the services prior to Baptism carefully, we have purification, from the time of the early Church until some time ago. There are exorcisms before Baptism. We read exorcisms to the candidates for Baptism all through Great Lent. We do not read exorcisms only on the day of Baptism. We read many exorcisms many times over. For what reason? Because the whole struggle was to release the candidate for Baptism from the energies of the devil. This is the main concern of purification.

Now, however, let us consider the state of faith in a period when we prepare candidates with moral teaching. You must be good children. Don’t do this, don’t do that… As long as they limit their evil deeds, they abstain from evil deeds. When they reach the point of abstaining from evil deeds they are catechized and their mind is filled with knowledge of the Old and New Testaments, the Creed and so on. They sit examinations, pass them and are baptized. This is Baptism. 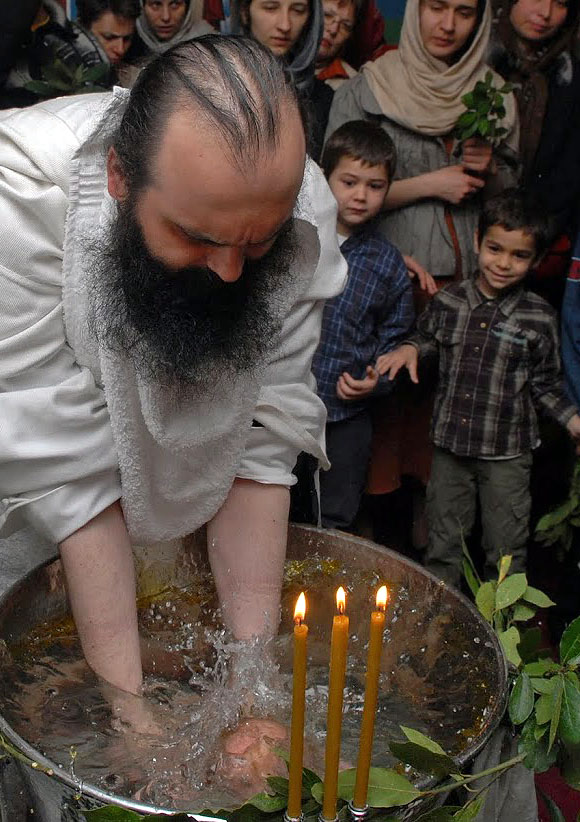 Baptism of a child

Metr. Hierotheos of Nafpaktos: It is not someone who has simply been baptised who is the temple of God, but the one who has the grace of God active within him. That is why catechism – which is a whole praxis of the Church – preceded Baptism.

Yes, but if you look closely at the patristic texts you will see that someone who has received the visitation of the Holy Spirit is the temple of God. Then we understand why St Basil the Great and St Gregory the Theologian postponed Baptism and were baptised late. You know, our professors in America say that it is good for someone to defer Baptism, because then he can sin and do whatever he likes. When he is baptised all his sins are washed away; once he has tired himself out he is baptised and becomes a good Christian and is out of danger.

I have a suspicion, a slight suspicion, because purification was difficult and they had to go through purification, which was not simply catechism and moral instruction, that it was not for moral reasons that they were not baptised, but it was because they had not passed through the exercise of purification of the nous, by which all thoughts depart and one thought remains, the constant remembrance of God. Catechism and exorcisms were also accompanied by ascetic practice. In order for someone to be baptized he had to go through asceticism, not just moral correction of his life. The preparation for Baptism is not moral correction. The preparation for Baptism is asceticism.

Metr. Hierotheos of Nafpaktos: Catechism actually aimed at separating the noetic faculty from the rational faculty.

Fr. John Romanides: The paradox of Orthodox asceticism is that when someone practices asceticism in order to be baptized, or — now that we have infant Baptism, the predominance of which has led to a particular state within the Church — when someone practices asceticism in order to reach the state of illumination as the Fathers understand this illumination, he has to practice asceticism in such a way as to separate the noetic faculty from the rational faculty. The rational faculty is engaged in prayer, but it cannot always we engaged in prayer. Is that not so?

Metr. Hierotheos of Nafpaktos: What does not take place now with the introduction of infant Baptism comes about at monastic profession, which is described as a second baptism. Essentially it is repentance that activates the grace of Baptism and Chrismation.

Now we need to discover something else. Why is it that this does not always happen in monasticism, but sometimes it is a routine ceremony? This is not something that can be laid down, at least in terms of ritual.

Metr. Hierotheos of Nafpaktos: The liturgical practice of the Church was also defined from this theological perspective.

That is why we have the catechetical arrangement of the readings of the Church, based on this ancient classification of the books of the New Testament and the Old Testament.

Metr. Hierotheos of Nafpaktos: In the early Church one passed through the stage of purification during catechism and then Baptism followed. Baptism took place on these preconditions. When, however, infant Baptism was introduced, the Church paid great attention to the Christian parents and the Christian godparents, who were to catechise the baptised child when it was older. That is why the godparent recites the Creed and says the words Ί have renounced’ on behalf of the infant.

Fr. John Romanides: As someone has passed purification, we baptize him. But infant Baptism is another matter. It is assumed in that case that the godparent is illuminated, together with the parents.

Now, however, we have another problem. We go to the Church for a Baptism. I don’t know what happens in Greece, but in America Mrs. Fofo arrives in a backless dress, with make-up and dyed hair — there she sits, a glamorous woman, the godmother — and the Priest says, ‘Do you renounce Satan?’ and she answers, Ί renounce…!’ Later on he reaches the question, ‘Have you renounced…?’ Between Ί renounce’ and Ί have renounced’ is he expecting a miracle? Now, she has said, Ί renounce’, and says it in such a way that even the priest could drop to the floor. ‘I renounce…I have renounced!’ Afterwards, she’s the godparent!

Metr. Hierotheos of Nafpaktos: When catechism is given beforehand, together with the whole process of purification, the one being baptised experiences the first Resurrection.

Metr. Hierotheos of Nafpaktos: With these Orthodox presuppositions and Chrismation that followed, one became a temple of the Holy Spirit…

Source: Empirical Dogmatics of The Orthodox Catholic Church.
According to the Spoken Teaching of Father John Romanides
,
Volume 2, 2013.