It is true that the attitude on the part of ascetics towards the vagaries of human life provokes a variety of conflicting reactions in the psyche of the technically-orientated people of today.

First of all, modern people who relentlessly condemn this firm ascetic position might be thoroughly astonished if they were to analyze their own social behaviour. Because, as psychology tells us, if people fight hard against something, if they consistently reject it, this has something to do with their own inner world. Hostility, as an obsessive function, confirms people’s attachment to the thing they’re attacking. So the more off-putting the harsh solitude of the ascetic life may seem in the eyes of people today, the more this betrays a deeper relationship with this very solitude. This is enough to make you wonder whether, when people condemn ascetic solitude, they’re actually condemning their own isolation, which they’re unconsciously concealing in the furthest depths of their persona. The psychological function of repression and the projection of subconscious psychical issues might cause people to clarify the confused situations they’re keeping closed within themselves. 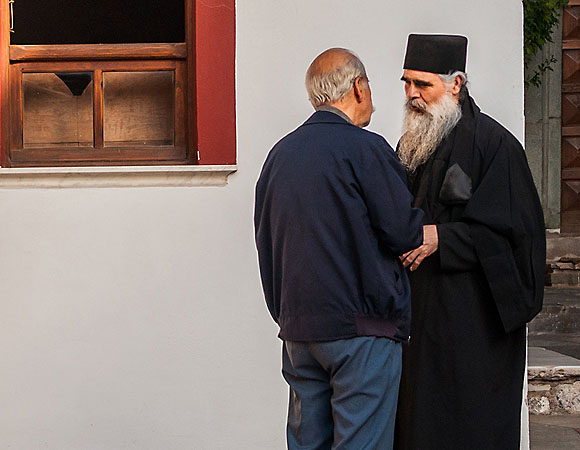 While the external course of the psyche of technically-minded people today may be centrifugal, that is, extroverted, the subconscious part of their personality suffers from an accumulation of repressed desires which are of a centripetal, that is, introverted, nature. So when people are anxious to condemn the harshness of ascetic solitude, they’re actually “conversing” with the subconscious part of their personality, with their repressed inclination towards introversion. Since they repress it, this means that they hate it, because that’s what’s imposed by the extrovert tension in today’s social mores. But they also desire it, because they subconsciously understand its redemptive function.

In  any case, who stamped into people’s personality, as an ultimatum, the notion that sociability was its authentic and natural characteristic? It is, of course, true that the veneer of modern life is of an intensely social nature. But who can vouch for the genuineness of that nature?

The undeniably tragic everyday events of modern life easily provide abundant evidence of the heart-rending isolation of people today. Technological progress has produced a sociability which is, indeed, “technical” in the sense of artificial or mechanical, which, in many instances wears away at human emotions and downgrades interpersonal relationships beyond repair. Modern callousness, indifference to one’s neighbour, the crime rate, moral torpor and so many other corrosive elements in human life firmly underline the misanthropic aspect of modern sociability. So if people today make the  effort to filter their confused state, this turns out to be an exercise in self-knowledge which shatters the false symbols and the general illusions of our “social” sociability. Technically-aware people today, although they condemn ascetic solitariness, subconsciously seek the satisfaction which this isolation gives the ascetic. And, although they boast about their social conscience, they are inevitably more than aware of their own tragic isolation. This is why today, although they seem to be social, in fact they “depart far away from people”. The conflicts they harbour within themselves force them into an anti-social isolation. So they’re too immature to converse with an ascetic who’s living as a hesychast and are in no position to condemn the firm decision to escape the slings and arrows of fortune. Sociability, in the name of which they judge ascetic “excesses”, is therefore a way out of the isolation which, at the same time, they’re seeking.

On the other hand, ascetic isolation has an authentically social content which could teach modern people a lot, if they wish to learn about knowing their neighbour. The ascetic flight from the turbulence of human existence is the deepest expression of Christian sociability. This is a paradoxical claim, certainly, but true. Ascetic “individualism” is the experience of an authentic dedication to the love of one’s brothers and sisters. This ascetic irrationality is understood, to some extent, by those who know, even in no great depth, the experience of “the life of silence” In truth, the ascetic in the desert, the harsh lover of silence, is the perfect model of the brother.

What the ascetic basically desires, of course, is to experience the divine presence. His asceticism aims at purifying his soul and his nous, from anything that might hinder or thwart this effort. Love of his neighbour, of his “brother”, is understood by an ascetic as the precious fruit of the mystical experience of Divine Passion.  It’s only when his heart and nous have been filled with the presence and love of God that he’ll be able to love his brother with genuine feelings of devotion, and even, if need be, of self-sacrifice. If his prime “task” of the experience of union with God is disturbed or hindered, the ascetic is unable to fulfill his duty of love towards his neighbour, even though this is the very thing that the love of God in fact demands. This is why, although an ascetic never ceases to express fraternal affection towards his neighbour, when he acquires sanctity and the virtues in great measure he is even more open in his declarations of brotherly love and understanding.

Certainly, however, it is an unquestioned experience that “whenever an ascetic comes to meet the world, his soul shrinks back”. On the other hand, “the more people distance themselves from converse with others, the greater is boldness before God cultivated in their nous”. It is precisely this experience which is the guide for the behaviour of the ascetic towards human vicissitudes or human relationships as these are understood by people today.

The logical organization of the secular spirit therefore cannot understand that  even in cases where an ascetic avoids conversation with other people there’s an underlying response of love and devotion to them. If ascetics avoid people “for God”, and if God is love, then indeed the experience of the presence of God, like an inexhaustible source of genuine love, will enable the ascetics to love their neighbours with “divine love”.

And, also, in the case of fraternal affection we encounter an ascetic “irrationality” and an “contradictory” psychological and spiritual pattern of behaviour. Saint Isaac asks: “Do you want to acquire love of your neighbour, in accordance with the Gospel command, in your soul? Remove yourself from him and then the flame of love will burn brightly within you and he will rejoice at the sight of it as he would at an angel of light”. Distance from one’s neighbour cultivates love as in the Gospel, within the psyche of the ascetic. And we’re dealing here with an existential contradiction which sets on the firmest of foundations the psychological and spiritual harmony which is a prerequisite for genuine sociability. “Be a friend to all people but be alone in your understanding”. The ascetic in the desert must love all people, to give them his emotions and his heart, and at the same time, must live out his isolation, without which he cannot encounter God. “Be a partaker in the sufferings of all, be a stranger to all in the body”.