The presbyters from Nicomedia martyrised at sea, under Valens 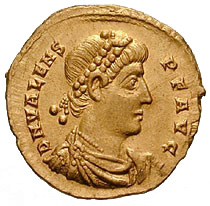 The Emperor Valens [364-378AD], leaving Constantinople, again set out towards Antioch; but on his arrival at Nicomedia, a city of Bithynia, his progress was arrested by the following circumstances. Eudoxius the bishop of the Arian church who has been in possession of the seat of the Constantinopolitan church for nineteen years, died soon after the emperor’s departure from that city, in the third consulate of Valentinian and Valens. The Arians therefore appointed Demophilus to succeed him; but the Homoousians considering that an opportunity was afforded them, elected a certain Evagrius, a person who maintained their own principles; and Eustathius, who had been bishop of Antioch, formally ordained him. He had been recalled from exile by Jovian, and had at this time privately come to Constantinople, for the purpose of confirming the adherents to the doctrine of the homoousion.

The Emperor banishes Evagrius and Eustathius. The Arians persecute the Orthodox

When this had been accomplished the Arians renewed their persecution of the Homoousians: and the emperor was very soon informed of what had taken place, and apprehending the subversion of the city in consequence of some popular tumult, immediately sent troops from Nicomedia to Constantinople; ordering that both he who had been ordained, and the one who had ordained him, should be apprehended and sent into exile in different regions. Eustathius therefore was banished to Bizya a city of Thrace; and Evagrius was conveyed to another place. After this the Arians, becoming bolder, grievously harassed the orthodox party, frequently beating them, reviling them, causing them to be imprisoned, and fined; in short they practiced distressing and intolerable annoyances against them. The sufferers were induced to appeal to the emperor for protection against their adversaries if haply they might obtain some relief from this oppression. But whatever hope of redress they might have cherished from this quarter, was altogether frustrated, inasmuch as they thus merely spread their grievances before him who was the very author of them.

Certain Presbyters burnt in a Ship by Order of Valens. Famine in Phrygia

Certain pious men of the clerical order, eighty in number, among whom Urbanus, Theodore, and Menedemus were the leaders, proceeded to Nicomedia, and there presented to the emperor a supplicatory petition, informing him and complaining of the ill-usage to which they had been subjected. The emperor was filled with wrath; but dissembled his displeasure in their presence, and gave Modestus the prefect a secret order to apprehend these persons, and put them to death. The manner in which they were destroyed being unusual, deserves to be recorded. The prefect fearing that he should excite the populace to a seditious movement against himself, if he attempted the public execution of so many, pretended to send the men away into exile. Accordingly as they received the intelligence of their destiny with great firmness of mind the prefect ordered that they should be embarked as if to be conveyed to their several places of banishment, having meanwhile enjoined on the sailors to set the vessel on fire, as soon as they reached the mid sea, that their victims being so destroyed, might even be deprived of burial. This injunction was obeyed; for when they arrived at the middle of the Astacian Gulf, the crew set fire to the ship, and then took refuge in a small barque which followed them, and so escaped. Meanwhile it came to pass that a strong easterly wind blew, and the burning ship was roughly driven but moved faster and was preserved until it reached a port named Dacidizus, where it was utterly consumed together with the men who were shut up in it.

Many have asserted that this impious deed was not suffered to go unpunished: for there immediately after arose so great a famine throughout all Phrygia, that a large proportion of the inhabitants were obliged to abandon their country for a time, and betake themselves some to Constantinople and some to other provinces. For Constantinople, notwithstanding the vast population it supplies, yet always abounds with the necessaries of life, all manner of provisions being imported into it by sea from various regions; and the Euxine which lies near it, furnishes it with wheat to any extent it may require.