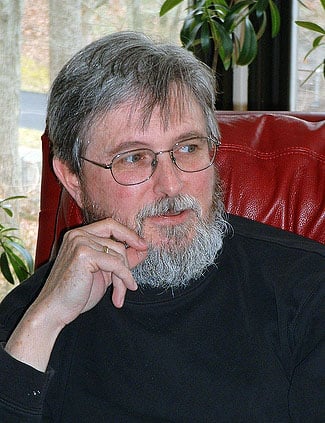 In 2010 I published Everywhere Present: Christianity in a One-Storey Universe. The articles examined the modern, secular tendency to see God (and religion) as belonging to a sphere somehow removed from daily life. God is there if you want Him, but absent if you don’t. It is a habit of thought that conveniently ignores one of the possible dividing lines in our so-called multi-cultural nation. If religion is a private matter, then, as far as the rest of the population goes, it doesn’t matter. I countered with the classical Christian teaching concerning God. He is everywhere and the world is His. More than this, He chooses to make Himself known in and through the materiality of this world. We encounter God here, in the very world in which we live. That encounter is a sacramental understanding of the world. However, over time, I have come to see that many people this understanding as a suggestion to think differently. This, however, is inadequate.

We are so constructed that we do not live “in the mind.” We often think we do, but this is itself a product of the environment we inhabit and its shape. What I will suggest here is that the modern world, particularly in its American form, is shaped for the purpose of abstraction. Our spaces, both public and private, are often designs of “convenience,” meaning, “shaped in a way that I do not have to pay attention to them.” The coming advent of the “wireless” home, in which almost everything can be controlled from your phone, is simply one more way in which our “train of thought” can be less interfered with. It’s so much easier to adjust the temperature in the house without getting off the sofa (I know because I have a Nest Thermostat in my home).

Space, both geographical as well as architectural, is generally a result of choice and design rather than nature. And the choices that drive those shapes and spaces for us have their origins in deeper assumptions about how human life is lived. It is entirely possible to see what matters to a people, by how they have choose to arrange themselves and their spaces. In America, that arrangement is largely driven by individualism, consumerism, privacy, and the automobile (itself the mode of individualistic transportation). Our space is not constructed for efficiency, nor for the generation of community, nor for the relationship with the Divine. Our spaces are repeated endlessly across the country (America is a franchise operation). They are built for automotive convenience. But in very few places is the space actually interested in anything more.

The immersive ugliness of our everyday environment in America is entropy made visible. We can’t overestimate the amount of despair we are generating with places like this [photo of a suburban shopping strip]. 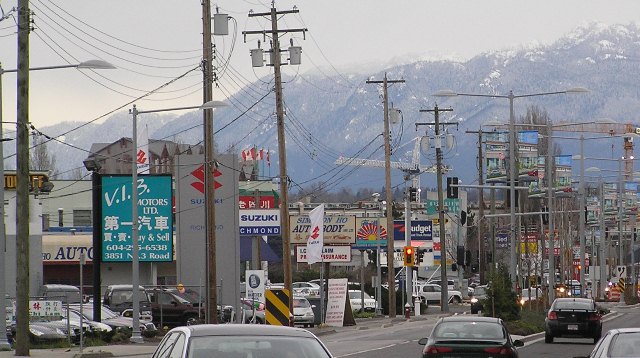 Whether we want to admit it or not, suburban sprawl (Kunstler calls this is the “greatest misallocation of resources in history”) is a sacrament of our secularized lives.

The Church, for example, occupies precisely the place that any other joint along the strip might offer. My parish bought the lot next to our building a few years back. Had we not, a drive-through car wash was to be built there. The Church becomes just another consumer option in an otherwise consuming life.

The “commuter” Church has become standard fare in America. There is very little choice, given the other choices that govern the shape of our landscape. And this shape is conducive to a commuter spirituality. It is drives us towards mediocrity and shallowness.

It is important to understand that the space we inhabit, the commuter Church model, is anti-sacramental. It creates a false relationship between the individual and the surrounding world. Isolated and insulated from nature and community, the sense of what is occurring in the mysteries of the Church becomes distorted. Bread, Wine, Water, Oil, Honey and the like are reduced to mere commodities.

Obviously, not all communities will be farming communities. But our globalization now distorts the most basic necessities of human life. Everything is in season in every season. The global sphere we inhabit is an abstraction, an electronic world that hides its work (and its exploitations). Things simply appear on our doorstep, delivered by men in brown shirts.

I am not an enemy of convenience. However I am suggesting that how we relate to the world around us is primarily governed by the shape of the world around us. Given that our spaces are anti-sacramental, extra effort is required to live in a sacramental manner in the modern context. This is part of the peculiar sufferings of our time. Faithfulness comes harder to a modern person than it has at any time in history.

Architecture and design are not destiny. I think of a passage in Father Arseny, describing a monk who managed a holy life in worst years of the Soviet period:

The confession of the dying Mihail brought Father Arseny to see how even under the unbelievably complicated circumstances of modern life, with its political upheavals, its complex human relations, the officially supported atheism, the trampling of the faith, the fall of moral values, the constant suspicions and false reports, and the lack of any spiritual guidance, a man of deep faith could overcome everything which came between him and God.

“Overcoming everything” is a truly great feat. I offer here a few suggestions for the struggle:

Our usual commuting distance makes the sacramental presence of the Church problematic. It ceases to have its proper, even casual presence and becomes only a destination. Break the commuting cycle and find ways and reasons to be there apart from service times. The Temple is something to be loved and cared for. If we treat the Temple like a store, we’ll get very little from it.

Wean your eating habits from the global market. There is a growing movement of “local foods” drawn from the farms nearby. Become a patron and work at learning to eat locally. If it’s not in season, maybe you should do without.

Become active in the community. You don’t have to be a leader, but you should be a member. Resist the temptation to live life in the workplace, car, and home. There is a world outside of them all.

Work at making connections between the home and the faith. Orthodoxy is filled with customs associated with feasts and devotions.

Learn to sing and find ways to sing with other people – even outside of Church. This was once a universal human activity. To be a non-singing human being is wrong. My mother never hit a correct note in her life, but she sang frequently and with gusto.

If your commute makes attendance at Feasts difficult, then make a plan (or work with others and your priest) on how to keep it in the home. Never let a Feast go by unobserved.

We all use the internet (how else would you read this?). But work at structuring your time such that your primary engagement is with the external, physical world and not a digital simulacrum.

Pray always. Everywhere. Give thanks always for all things. Never be ashamed of your faith.