He was born in the province of Saratov in Russia in 1869. Even as a child he loved prayer, which he taught to the other children of his age, boys and girls, who treated him as the Elder of their little ‘monastery’. He also loved learning and actually graduated from the Theological Academy in Kazan. While there he was also tonsured and ordained to the priesthood. 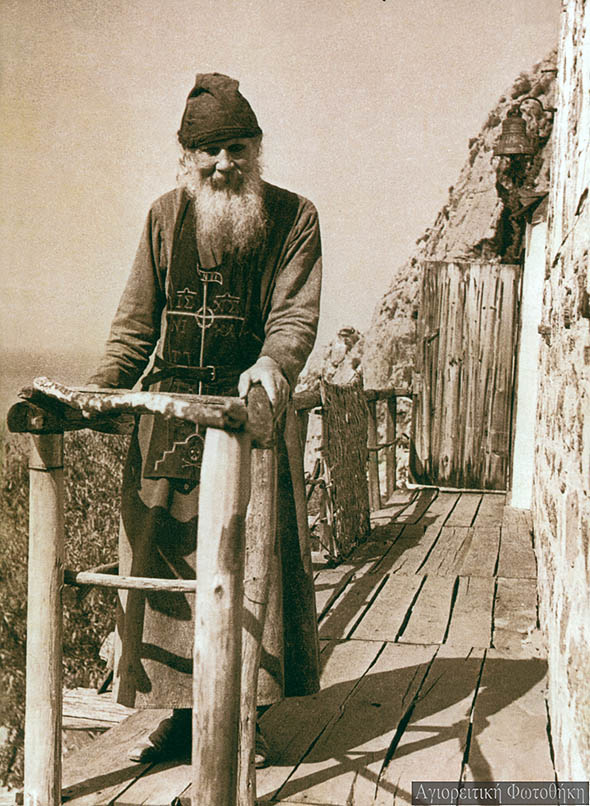 He came to the Holy Mountain in 1901 and lived the ascetic life in a number of kellia and kalyves at Kapsala and at Saint Basil’s. From 1913 he settled at Karoulia. He particularly enjoyed studying the Lives of the Saints. He struggled mightily to imitate the saints, to conquer his anger, which tormented him and to reach a passionless state. He was tonsured a monk of the Great Habit by Elder Ignatios the Spiritual Father (†1927).

For the last eight years of his life he lived with his disciple Nikodimos (†1984).

Living together helped both of them spiritually in their struggle to pray. Elder Theodosios was also the Elder for the roughly 35 Russian monks in the huts of Karoulia and was their spiritual guide. Once there was one of them who couldn’t manage to die. The others asked Elder Theodosios to pray about this. He prayed, by himself, to Our Lady the Gate-Keeper and soon the monk went to his rest in the Lord. His sister had become a nun, but because of the persecution by the regime in Russia, she’d removed her habit and lived a very quiet life. The Elder continued to write to her and to pray. Shortly before his death, he received a letter from her in which she said she’d repented her decision, had donned the habit again and was reading the whole of the Psalter every day. The Elder was overjoyed that his prayers had been answered. He was also very happy that he was able to persuade a disobedient and lax monk to mend his ways. It was Father Nikodimos who related all this.

The Elder’s main concern was prayer. He said just before he passed away: ‘When you see your weakness, then, after you’ve humbled and chastised yourself, the Grace of God comes unexpectedly. It strengthens your weakness and protects your from the feeling of despair. But when you see something that seems like progress, then because of your self-satisfaction and self-confidence, the Grace of God is withdrawn, and this keeps you humble. It protects you in the future from pride and delusion, which would be the inevitable consequences. I have only one feeling. And thank God that I’ve achieved even so little, with His help. First there’s the recognition of my weakness and of the passions of my soul: at the slightest lapse in my attention, my mind turns not to things that are in themselves sinful, such as impure and hostile thoughts, but to things that are totally random. Secondly , there’s genuine gratitude to God because He’s helped me with the most necessary task for our salvation: that of prayer. That’s the only thing that’s really necessary for all Christians, particularly us monks. And the Lord’s helped me with that’. 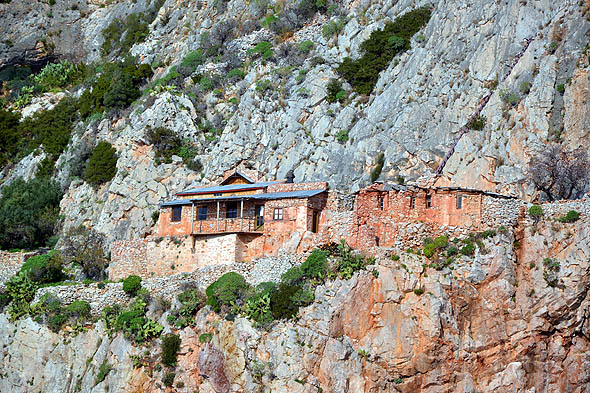 He foresaw his death and foretold it. He fell asleep in the Lord on 2.10.1937, saying the Jesus Prayer. He spent his last breath in the arms of his disciple, Nikodimos, with ‘Have mercy on me’ on his lips. His funeral was held in the church of the Holy Trinity, where he’d prayed for years. Elder Sophrony (†1993) said: ‘It would be no exaggeration to say that Elder Theodsios is at rest in the ranks of the saints’. 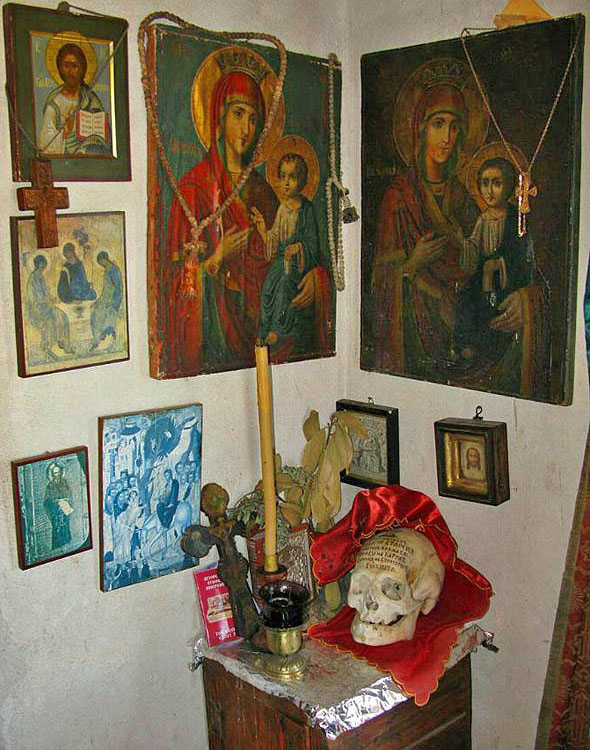 Inside the kelli of Hieromonk Theodosios Karouliotis, as it is today

Allow me to finish this piece with something that Elder Theodosios said and which completely disarmed me: ‘Christ loved the Scribes and Pharisees. His condemnation was a result of His love for them. Christ didn’t condemn the souls of the Pharisees, but their casuistry. This was precisely the problem that they had and this is why He chose this point to demonstrate His love for them!’