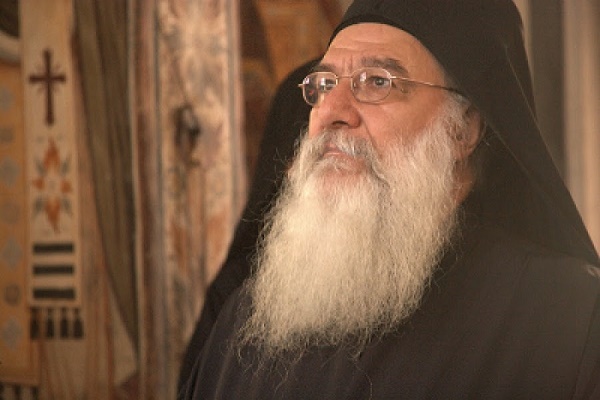 The significance of this relation is the fact, that Fr Moyses, a monk on Mount Athos, who writes Christian poetry, has been influenced by Cavafy, whose relationship with theology is notoriously complex. In some of his poems, Cavafy presents himself, as a pagan opponent of Christianity and openly speaks about homosexuality.[2] I think Fr Moyses’ poetry is important, because it combines the strong Orthodox character with Cavafy’s influences, and this combination is a new addition in Modern Greek literature. It is quite interesting to find these influences and how Fr Moyses succeeds in keeping the strong Orthodox character in his poems, although he has been influenced by Cavafy.

Fr Moyses was born in Athens, in December, 1952. His former, lay name was Ioannis Mavrikis. He has been a monk on Mount Athos, since August, 1974; he belongs to Koutloumousiou Monastery.[3] Mount Athos, which is in the Halkidiki peninsula of Greece, could be characterized as survival of Byzantine religious life and a jewel of Orthodox monasticism.[4] It is not only a living museum of Byzantine heritage whose architectural and natural beauties are world-renowned, but it continues with its important role in Orthodoxy: the quite living out of the monastic life.[5] In Mount Athos, there are twenty monasteries and several sketes and kellia. The twenty monasteries constitute autonomous region within the sovereignty of the Greek state.[6]

From his school days, Fr Moyses expressed a great interest in poetry. He published poems in youth journals, while he was a member of ‘Σύλλογος Ελλήνων Λογοτεχνών’ (‘Greek Litterateurs Society’) in 1968-71 and ‘Χριστιανική Λογοτεχνική Συντροφιά’ (‘Christian Literary Company’) in 1972-74.[7] In 1996, Fr Moyses became a member of ‘Εταιρεία Λογοτεχνών Θεσσαλονίκης’ (‘Litterateurs Company of Thessaloniki’) and ‘Εθνική Εταιρεία των Ελλήνων Λογοτεχνών’ (‘National Company of Greek Litterateurs’). Since 2002, he has been a member of ‘Φιλολογικός Σύλλογος Παρνασσός’ (‘Parnassos Philological Society’), and since 2005, an honorary member of ‘Εταιρεία των Φίλων του Λαού’ (Friends of People Company).[8] His memberships in the above literary groups show his love and interest in poetry and that his poetry is recognizable by Greek readers.

Since he was a child, Fr Moyses felt the calling of Mount Athos. He was moved by Mount Athos’ incense, icons, crosses, psalmodies and monks.[9] He loved Christ, Byzantine and classical music, painting and literature (especially Papadiamantis, Dostoevsky, Solomos and Makrygiannis). He used to go to the theatre and lectures.[10] Going to Mount Athos as a visitor, he was impressed by the beauty, calm and kindness of monks. These elements made him want to stay permanently on Mount Athos.[11] Fr Moyses loves Mount Athos, because of the tranquility and peace of his cell and because he experiences the virtue of such a special place.[12]