A historical outline of the Athonite Monasticism

The monks of Mount Athos could not remain indifferent to the Greek Revolution of 1821 when fighting broke out in Macedonia and Halkidiki. Indeed many of them, like the energetic Nicephoros, secretary of Iviron, had long since been initiated into the Philiki Etairia (Friendly Society) that sparked off the War of Independence. In May 1821 Mount Athos declared its support for the Greek revolutionary movement led by Emmanuel Papas, amidst much rejoicing in Karyes. The Turkish governor was arrested and held in the Monastery of Koutloumousiou, and armed monks were deployed on the borders of Athos.

The rebellion was soon crushed in Northern Greece, and the monks had to pay the price for having participated. Turkish soldiers were quartered on the monasteries, which were forced to provide for their keep. A heavy special tax of 3,300 purses (1,750,000 piastres) was imposed on the Mountain as a whole, and the regular taxes were doubled. The Halkidiki dependencies were badly damaged and the income from the profitable Moldo-Wallachian dependencies was stopped for at least five years. Debts mounted, large numbers of monks left Mount Athos, and many monasteries were reduced to penury and forced to sell many of their relics, although the most precious had been removed to safety on the islands of revolutionary Greece. 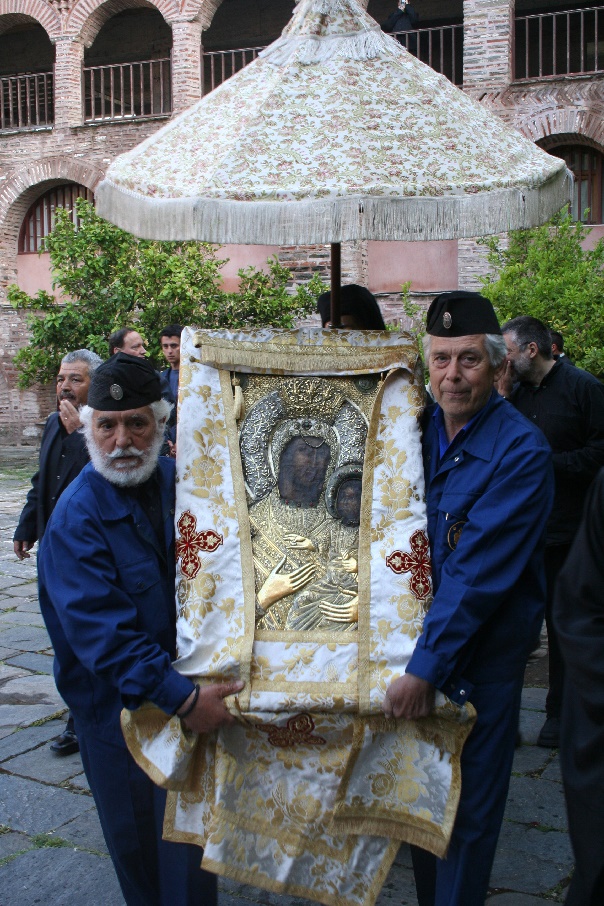 These sanctions were lifted only in 1830. A new disaster struck in 1863, when the Romanian government appropriated all the Athonite lands and dependencies in Moldo-Wallachia. this was followed by a further blow in 1873, when the Russian government decided to expel the monks from their lands in Bessarabia and the Caucasus and paid the monasteries only two fifths of their income from these properties. After the October revolution in 1917 this source of income dried up completely.

In the second half of the 19th century Mount Athos was caught up in the Balkan nationalist conflicts and suffered from the Russian government’s attempts to change the ethnological character of the monastic state by swamping it with huge numbers of Slav, mostly Russian, monks, infiltrating poor monasteries and dependencies and building enormous monastic establishments. By the beginning of the 20th century Mount Athos had about 3,500 Russian monks. The liberation of Athos by the Greek fleet in November 1912 put an end to this dangerous situation, and the monastic state became a self-administering part of Greece. Its legal status was enshrined in the Greek constitution and was defined by its Charter, which was drawn up in 1926. This Athonite “Constitution” confirmed, with many modifications, the traditional administrative institutions of the monastic state.

Today on Mount Athos there are 20 sovereign cenobitic monasteries, the same as the number fixed in the 16th century. Administratively and spiritually dependent on these are 12 sketes and about 250 cells. Each monastery is self-governing, and regulates the lives of its monks in accordance with the monastic rules and internal ordinances approved by all the monks. Every year each monastery chooses one of its monks to represent it in the Holy Community. This body deals with matters concerning the Mountain as a whole, and also oversees the smooth operation of the monasteries’ internal regulations. The executive body of the Holy Community is the Holy Epistasia.

Mount Athos is under the spiritual jurisdiction of the Ecumenical Patriarch of Constantinople, and the Greek state is represented on the Mountain by the Civil Governor.

The decline of the early decades of the 20th century, brought on by the failings of the idiorrhythmic system, the dramatic loss of income following the appropriation of the monastic lands in Macedonia and the evils of the Second World War, was halted in the late sixties.

Today Mount Athos is once again flourishing. Large numbers of educated young men have flocked to the monasteries, now all cenobitic, and to the sketes and the cells of the Holy Mountain.

K. Vlachos, Athos, the peninsula of the Holy Mountain and its monasteries and monks then and now, Volos 1903.

Ch. Ktenas, All the holy establishments on Mount Athos, 726 in all, and their services to the enslaved nation, Athens 1935.

I. Mamalakis, Mount Athos through the ages, Thessaloniki 1971.

N. Svoronos, The meaning of the institution of Mount Athos for the development of Greece, Mount Athos 1987.