In these lines, Fr Moyses preaches the same ideals as Cavafy: experience, knowledge and wisdom, which can be acquired during a journey. Cavafy and Fr Moyses present this triptych (experience, knowledge and wisdom) as a worthy one. A person should travel and gain these values, because these are the profits of a proper way of life. Cavafy advises his reader that he should travel to many Egyptian cities,[82] while Fr Moyses advises his reader that he should travel around the world.[83] Although this suggests an actual travel, we should see it as an allegory. Commonly, the two poets consider the journey an important part of any person’s life. 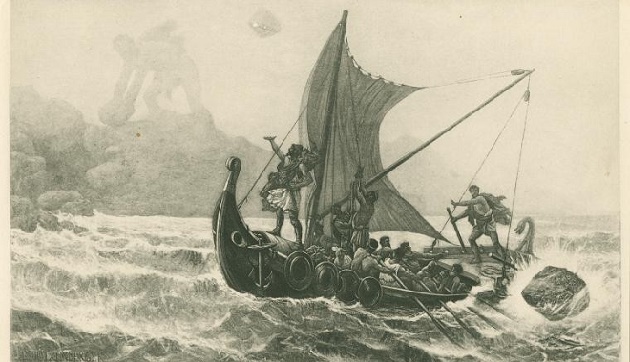 In addition, Fr Moyses’ use of the conjunction ‘να’ is also an expressive way used by Cavafy in ‘Ithaca’.[84] Although one could say that the use of this conjunction is not odd at all, the way it is used by the two poets is identical, as they both use it repeatedly to draw readers into the atmosphere of counsel. Cavafy advises twice: ‘νὰ εὔχεσαι νἆναι μακρὺς ὁ δρόμος’ (‘pray that the road be long’),[85] while in the next lines he writes: ‘νὰ σταματήσεις σ’ ἐμπορεῖα Φοινικικά’ (‘that you may stop at Phoenician emporia’), ‘τὲς καλὲς πραγμάτειες ν’ ἀποκτήσεις’ (‘acquire all the fine wares’), ‘σὲ πόλεις Αἰγυπτιακὲς πολλὲς νὰ πᾶς’ (‘that you may visit many an Egyptian city’), ‘νὰ μάθεις καὶ νὰ μάθεις ἀπ’ τοὺς σπουδασμένους’ (‘to learn and learn from lettered men’), ‘πάντα στὸν νοῦ σου νἄχεις τὴν Ἰθάκη’ (‘always keep Ithaca in your mind’); and finally he mentions: ‘καὶ γέρος πιὰ ν’ ἀράξεις στὸ νησί’ (‘and once you’re old, cast anchor on the isle’).[86]

Interestingly, the repetition of this conjunction followed by second person singular imperative appears in both poems eight times. This shows not only Cavafy’s persistence in using this form, but also Fr Moyses’ persistence in following Cavafy’s forms in a modified version. The frequency of the conjunction ‘να’ in the two poems gives an identical atmosphere.

Another similarity between the two poets is the fact that both designate one specific destination. As we have already seen, Cavafy clearly denotes Ithaca as the destination, while Fr Moyses, indirectly, identifies Athens:

to say, I went around to the whole world

to return to Athens

As opposed to Cavafy who points to Ithaca as the obvious final destination in his poem, Fr Moyses implies Athens. Fr Moyses advises his reader that he should travel around the world, and then return to Athens to become a benefactor. By using the verb ‘γυρίζω’ (‘return’ or ‘go back’), Fr Moyses implies that his reader should depart from a place and then return to the same place. The denotation of Athens as departure and final destination place is expressed in the phrase ‘να γυρίζεις στην Αθήνα’ (‘return to Athens’). Thus, in his poem, Athens constitutes departure point and arrival place. In that way, Fr Moyses implies that someone should always return to his home place, because this is where he belongs.

It could be also said that in the above lines, Fr Moyses conveys the main target of the poem. This is to depart from Athens, have a fruitful journey around the world, gaining valuable ideals such as experience, knowledge and wisdom. Then, you should return to Athens and become a benefactor, which means that you should help other people to find their destination in life. This also means that a person should share his knowledge and experience with other people. In addition, as opposed to the mythical dimensions given by Cavafy in his poem, Fr Moyses gives a more realistic perspective of the travel, as the mythical travel of Odysseus to Ithaca is replaced by Athens.