The Holy and Great Orthodox Council: From St. Constantine to Crete

The Holy and Great Council of the Orthodox Church to be held in Crete during Pentecost has prompted a great deal of discussion. The affirmation at the January Synaxis of Primates in Chambésy to proceed with the Council was historic and almost one hundred years in the making. With the stage set, this essay will examine three points: an historical framework with which to view the June 2016 Council; the role of the Ecumenical Patriarchate; and, the politics behind the Council with a focus on the Russian Orthodox Church.

1. From St. Constantine to Crete

Constantine the Great called the First Ecumenical Council in 325. In this first Council of Nicaea, the now well-known number of 318 assembled bishops – although the number actually present was likely lower – condemned and rejected Arianism. Following about one month of deliberations, the Creed, with the key word homoousios (one in essence) emphasizing the unity of the Father and Son, was complete. The Council also dealt with matters of Church administration.

Let us highlight three points from Nicaea and overlay them with the upcoming Council in Crete. 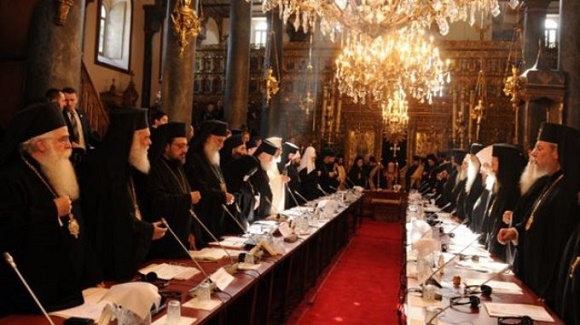 First, the Ecumenical Council was summoned at the beginning, and confirmed at the end, by St. Constantine the Great. This is consistent with the first requirement outlined in a sixth-century treatise that for a council to be considered as ecumenical it must be convened by the Emperor.

Does the absence of an Emperor diminish the Holy and Great Council’s legitimacy and potential? No. The ecclesiastical and political factors of the twenty-first-century differ from the context in the Ancient Church. Georges Florovsky writes that, “In a certain sense the General Councils as inaugurated at Nicaea may be described asImperial Councils.”

Second, on representation, the senior bishop in primacy of honour, Sylvester of Rome, was actually absent on account of old age and illness. He was represented by two priests who enjoyed a privileged position and even signed the acts before the bishops. Approval of council decisions by the Bishop of Rome/his proxies was sought-after in deference to his seniority and to ensure the unity of the Church.

Concerning participation in Crete, John Chryssavgis, Archdeacon of the Ecumenical Throne who was present in Chambésy, noted during the Annual Schmemann Lecture that: “Not an insignificant portion of the hierarchy feels that the presence of lower clergy, non-bishops and certainly laity, is just not the same as having a bishop at a council.” While almost all participants at a council should be bishops (or their proxies), as overseers of the Church, there is significant precedence for both the absence of some church leaders and the active participation of non-bishops. For example, the discussion around the meaning and importance of homoousios at Nicaea was led in large part by St. Athanasius, who, although he eventually became Archbishop of Alexandria, was “just” a deacon when he went to the First Ecumenical Council.

Third, the Council was a deliberative assembly with a final vote usually unnecessary. Florovsky writes, “Thecollegiality of the bishops was assumed…” (although it did not hurt that an overseeing Emperor could threaten cantankerous clergy with exile). The key takeaway here is that decisions were not – and need not be – unanimous; otherwise, Arius and his supporters could have vetoed the decisions of Nicaea. The demand for unanimity by some has no more significance today than it did in 325, when it had none.

On the decision making process and acceptance, it should be noted that consensus requires dissension. While it is beyond the scope of this essay to detail the conditions for authenticity, suffice it to say that council decisions and outcomes must be divinely inspired, consistent with Apostolic Tradition and received positively by the faithful who are the people of God. Many local councils and even some which clothed themselves with the “Ecumenical” title and followed proper procedure were discredited and rejected. Decisions must seem good to the Holy Spirit (cf. Acts15:28) – this is the ultimate test, not the approval of every single participating bishop, some of whom may wish to play ‘God’.