If a person is characterized by lofty thoughts, then he has nothing to fear. There are no Laestrygonians, Cyclopes or Poseidon. This means that there are no impenetrable problems in anyone’s route to his final destination: Ithaca. Cavafy motivates his readers to leave aside any negative thoughts, the Laestrygonians, Cyclopes and Poseidon.[66] A man should overcome any passions and malice and everything which might obstruct his route to Ithaca.[67] 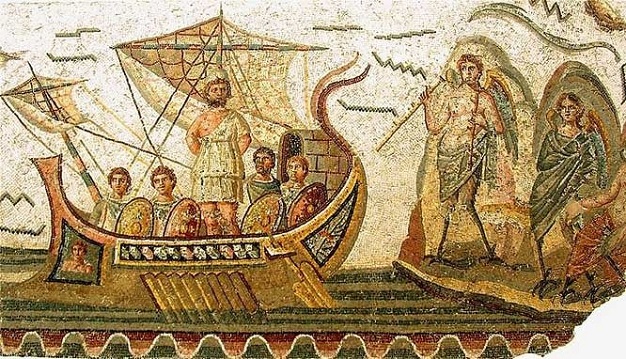 Through this symbolism, Cavafy attempts to show that problems exist only in the human mind, at an imaginary level. Lofty thoughts dissipate the imaginary mountainous problem, since they do not really exist. According to Cavafy, problems similar to the Laestrygonians and the Cyclopes have no real existence, if we focus on our aim and clear our minds from negative thoughts.

In the same way, Poseidon does not really exist. There are no jealous gods with vindictive intentions. As opposed to Poseidon who persecuted Odysseus throughout his journey (because he blinded Polyphemus), God does not punish us. Cavafy shows that we will not find any gods like Poseidon, who wants to punish us. In contrast, Cavafy makes us conclude, that if we face the future with optimism, God will be our companion to reach our destination.

It could be said, that although Cavafy populates his poems with pagan gods, through the description in this poem, he actually seems to believe in the Christian God, who is not envious of mortals. In an indirect way, Cavafy rejects the model of jealous gods with human passions, promoting the pure values of Christianity. If someone persists in his goal, God will escort and help him reach there. Cavafy juxtaposes ancient Greek gods with Christian God. Whereas Greek gods create obstacles and obstruct humans to proceed, Christian God is nothing like that. In contrast, he always supports humans and rewards their efforts.

Cavafy encourages his readers to have lofty thoughts and emotions in their mind, because these are prominent elements for their journey to Ithaca.[68] In ‘Ithaca’,[69] Cavafy describes the beauty of the journey, acquisition of personal experience and ascension of man from ‘earth to sky’:[70]

that you may visit many an Egyptian city,

to learn and learn again from lettered men.

Always keep Ithaca in your mind.

To arrive there is your final destination.

But do not rush the voyage in the least.

Better it last for many years;

and once you’re old, cast anchor on the isle,

rich with all you’ve gained along the way,

expecting not that Ithaca will give you wealth.[71]

Cavafy says that the journey to Ithaca should be a long one. A person has to learn a lot throughout this journey, while Ithaca should be constantly in his mind, because this is his goal. In that way, Cavafy implies that Ithaca will give hope and constitutes the main motivation to travel.

Ithaca is the final destination and target, but the journey to Ithaca what is fundamentally beneficial. So, providing the journey is long, then the more beneficial it is. Ithaca will not make us rich. In contrast, the travel to Ithaca will provide us with experience (‘visit many an Egyptian city’),[72] knowledge and strength (‘learn and learn’)[73] which is the profit and value of this journey. When in old age, the traveller will be happy from what was gained during this journey.