‘I believe that there is nothing lovelier, deeper, more sympathetic, more rational, more manly, and more perfect than the Saviour; I say to myself with jealous love that not only is there no one else like Him, but that there could be no one. I would even say more: If anyone could prove to me that Christ is outside the truth, and if the truth really did exclude Christ, I should prefer to stay with Christ and not with truth’.[1] 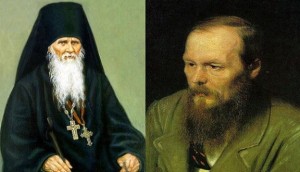 This great thinker could hardly fail to be attracted to the majesty of Optina. He was very interested in following the process of eldership and in becoming acquainted with the enlightened starets, Amvrosij. And in June 1878 he visited him and stayed for two days. Naturally, we do not know what they discussed in their private conversation. Fr Amvrosij was pleased with Dostoevsky and said of him: ‘There is a man who’s repenting’.

Starets Amvrosij, was a figure who resonated deeply within the soul of Dostoevsky, as did his work. He is presented in a life-like manner in the first chapters of Brothers Karamazov, which Dostoevsky was just beginning to write. This majestic work, a masterpiece of the composition of a novel, presents the life, activity and teaching of Starets Zosima in cameo. The whole of the external description of the place, the cell, the rooms of the Monastery, even some of the finer details, all speak of Optina.  Some of the features of the person of Starets Zosima can be attributed directly to Father Amvrosij. They certainly betray the personal impressions of the author.  He wrote that ‘the very first time that the starets looked at someone he hadn’t met before, he realized why they had come, what they needed and, very often, what it was that was troubling their conscience. The person repenting was astonished, often terrified even, feeling that their soul had been opened before they’d even said a word. Many of those who came for the first time to talk to him in private went into his cell in fear and trembling. Afterwards almost all of them came out beaming’.