«Give to the stranger – Give me this stranger»

This is stated in a different, but equally exceptional manner in the Doxastikon of Mattins on Great Saturday, which is what I would call a manifesto of Orthodox theology which, with the powerful lightning of the last days, transforms the important but imperfect «Give to the stranger» into the absolutely radical and extremely ontological «Give me this stranger». 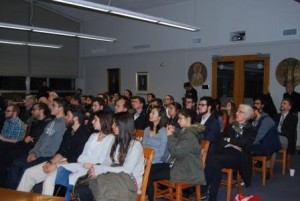 I therefore considered that tonight, in a place such as America, a place of such powerful migration, in a place which has experienced the turbulence of fierce racial disturbances and clashes, and coming, as I do from Greece which today is Europe’s largest camp for migrants from the East as a whole, it would make sense to talk about the mystery of alterity; about the Other; about the migrant and migration, about the mystery of the stranger. This is because, if we are to be honest to God and other people, we have to say that the whole history of divine Dispensation, from the creation of the world until its eschatological destination, is a history of the migration of a people of pilgrims and strangers. This is why the great Gregory the Theologian, states emphatically that the Church is made up, essentially, of a nation of migrants, who are waiting expectantly for the miracle.