St Joasaph was the son of the pious ruler of Epirus and Thessaly Symeon Sinisi, who was descended from the royal house of Nemanja and was proclaimed “tsar of the Greeks, the Serbs and the Albanians” under the name of “Symeon Uros Palaeologus”. His mother, Thomaïs, was the sister of the last Despot of Epirus, Nicephorus II. He was born around 1350 and christened Ioannes. Having been brought up in a devout family, Ioannes showed from an early age particular zeal for the spiritual life and an aversion for the things of this world. He paid frequent visits to churches and monasteries, and particularly the monasteries of the Holy Mountain and Meteora, constantly attending the Divine Liturgy and other services. 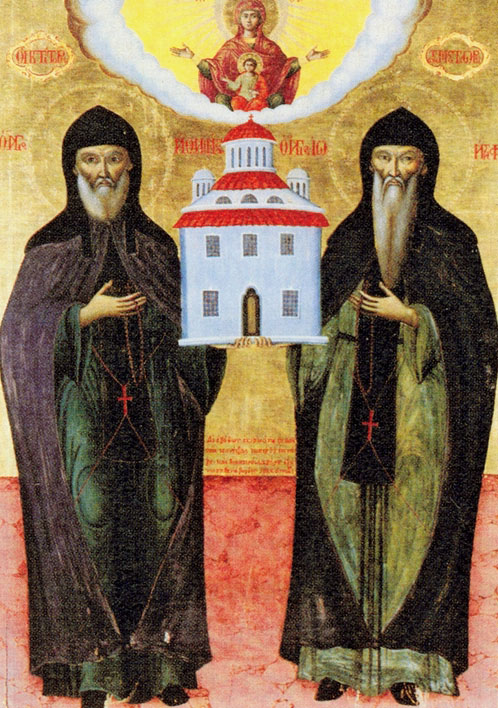 When his father died in 1369, leaving him the royal throne and the title of Tsar, Ioannes, who was then on Mount Athos, went to the capital of his kingdom, Trikala, and at once began to seek ways of being rid of his royal power and the worldly cares which went with it. With St Athanasius of Meteora as his spiritual father and guide, he handed over the government of the country to his relative Alexius Philanthropinus and retired to the ‘Platylithos’ Monastery – the Great Meteoron – to be with St Athanasius. There he was clothed with the simple habit of a monk and changed his name to Joasaph. It is characteristic of the Saint that while he was still Tsar he showed extreme humility and obedience to St Athanasius, who was Abbot of the monastic brotherhood. Joasaph made such progress in the spiritual life that when St Athanasius died (1382), he made Joasaph his successor and Abbot in his place. During his term of office the monasteries of Meteora were at the highest point in their history, since he continued and completed the work of St Athanasius, building and beautifying churches and protecting the privileges of the monasteries by royal decrees. In this task St Joasaph was greatly helped by his sister Maria Angelina, who gave a great part of her fortune to meet the needs of the Meteora monasteries. With her help, the Saint built a large number of cells at the monasteries, a monastic infirmary, water cisterns, etc. For his many benefactions and services to the Great Meteoron Monastery, Joasaph is justly numbered, with St Athanasius, among the founding fathers of the Monastery, as can be seen from its documents and wall-paintings.

When the Turks took Thessaly, the saint was forced to take refuge on the Holy Mountain (1394), where he lived in the then widely-renowned Monastery of Vatopaidi for seven years. In 1401, he returned to Meteora, where he lived the rest of his life as an ascetic in a small cell. He died around 1422 and his sacred relics are venerated today in the Monastery of the Transfiguration, together with those of St Athanasius of Meteora. His feast day is on 20 April.