We knew nothing about this New Martyr Saint until January 3 1950, when he revealed the location of his burial, at the ancient Monastery of the Annunciation, in Pendelis, in Nea Makri, Attica. Since 1965, the Saint has appeared often to nuns in the monastery or to pilgrims, either in their sleep or directly before them, surrounded by a brilliant light and exuding a most sweet fragrance. He tells them details, which are remarkably consistent in all the different accounts, about his life and the conditions of his martyrdom.

Saint Efraim became a monk at the age of fourteen, in a monastery which was flourishing at that time. After thirty years of living the ascetic life, he was arrested by the Turks, who slaughtered all the other monks and razed the monastery to the ground. From 14 September 1425 until 25 April 1426, he was subjected a great many tortures. In the end, the barbarians hanged him upside down from a mulberry tree. They nailed his feet and his head to the tree and then set fire to his body. 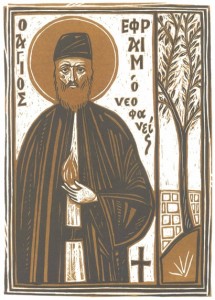 After this manifestation, the Saint continuously revealed that he was with the living God, appearing often to people and curing many who were sick. He appears in the form of a gaunt-looking ascetic or in his priestly vestments and states his identity, saying: ‘I’m called Efraim’. For some he heals incurable illnesses, for others he bolsters their wavering faith. Some he saves from danger, such as fire, or he comforts those who are troubled by bitterness and sorrow by showing them the tortures he himself endured for the love of Christ.

In 1982, Saint Efraim appeared to a believer together with Saint Raphael the New Martyr from Mytilini, who also revealed himself in modern times under similar circumstances [9 April]. It would appear that, in this way, the Lord wishes to show prophetically that today, as He did yesterday, He rejoices in His saints and, through them, pours out His grace, in order to bolster the Church and comfort the faithful.