The Birth of the Honourable Forerunner – 24th of June

The events surrounding the birth of the Honourable Forerunner are mentioned by Saint Luke the Evangelist in the first chapter of his Gospel.

He writes that in the days of Herod the king, there lived in Judea a certain priest called Zechariah. His wife was called Elizabeth and she was a descendant of the Prophet Aaron. They were both close to God and lived in righteousness, fear of God, piety, and sobriety and they observed the divine commandments. For many years, they begged God to bless them with the joy of a child, but, despite their fervent prayers, they had never had one. Zechariah and his barren wife, Elizabeth, had become very elderly and no longer had any hope of having a child.

One day, when Zechariah the priest was in the temple, censing the sanctuary, an Angel of the Lord appeared to him to herald the birth of the earthly and incarnate angel, John the Baptist. When Zechariah beheld him, he was astonished and was so afraid that he stood gaping. The angel of the Lord then said to him: ‘Do not be afraid, Zechariah, for your prayer has been heard, and your wife Elizabeth will bear you a son, and you shall call his name John. And you will have joy and gladness, and many will rejoice at his birth, for he will be great before the Lord. He will receive all the fullness of Divine Grace and will be filled with the Holy Spirit, even from the womb of his mother, Elizabeth. And through his preaching he will turn many Israelites to knowledge of the True God, their Lord’.

Zechariah was amazed to hear this message from the angel and asked in confusion, ‘How can this be so? How can I know and believe this, when I’m an old man and my wife’s both aged and barren?’ The angel then said to him, ‘I am Gabriel and I stand in the presence of God, and I was sent to speak to you and to bring you this good news. And behold, you will be unable to speak until the day that these things that I have foretold are fulfilled, that is until the day that John is born’. 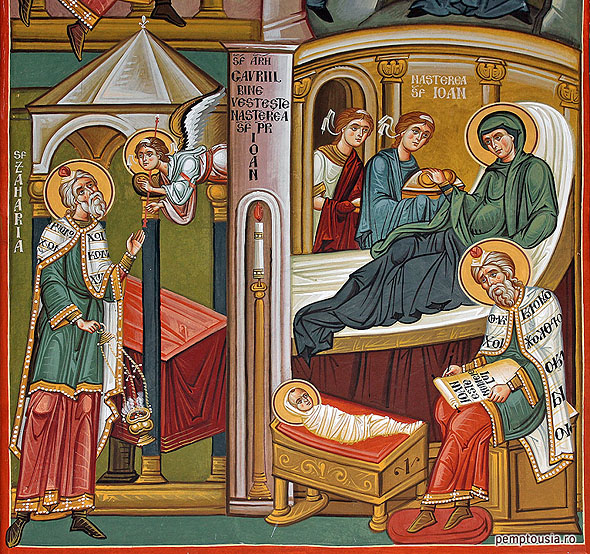 And, indeed, from that day, Zechariah was struck dumb and didn’t speak again until Elizabeth gave birth to the Forerunner.

On the eighth day, their relatives came for the circumcision of the child and wanted to give him the name of his father, Zechariah. But Elizabeth told them that he was to be called John. When they wondered why he should be called that- since it wasn’t a family name- Zechariah requested a small slate and wrote on it the following: ‘His name is John’. They were all surprised. Zechariah immediately opened his mouth and praised God from his heart. Every day, John proved to be an animate instrument of the Grace of God, full of the gifts of the Holy Spirit, a pillar of every virtue and all veneration.

In later Byzantine times, this feast was celebrated in the church of Saint John in Petra, in the presence of the Emperor.