The Position of the Elder in Women’s Monasticism

Orthodox women’s monasticism was founded almost at the same time as that of men. When Pachomios the Great formed the first men’s coenobium in Tabenissi, he was followed a few years later by his sister and then other women who desired the monastic life. Pachomios founded a women’s monastery for them, not far from the men’s. In the end, he became the founder of nine men’s and two women’s monasteries. He appointed his sister, Maria, to direct the women’s monasteries, which functioned on the basis of the rules of his own coenobium. He appointed Elder Petros, a monk of advanced age and great virtue, to the instruction of the nuns and the supervision of the monastery.

Something similar happened with Basil the Great and his sister, Saint Makrina, in the Black Sea region. After the death of her fiancé, Makrina, together with her mother, Saint Emmeleia and her servants withdrew from the world and lived the ascetic life close to the River Iris in a women’s monastery. The monastery operated on the rules of Basil the Great and Saint Makrina was the abbess. Close by the monastery of Saint Makrina was a men’s monastery with her brother, Petros, as Abbot[1]. 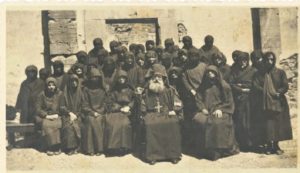 In the history of monasticism, most women have lived the ascetic life in coenobia. In other words, they’ve preferred the common life to that of the hermit, which is harsh and not so well suited to their more delicate and less resilient nature.

Let’s now pass on to the Greek realm and, in particular, to the time just after the foundation of the modern Greek state. Religious reforms were then put in place on the basis of an Exposition which was presented in 1833 by Archimandrite Theoklitos Farmakidis, secretary of the Holy Synod, and implemented by the Regency. According to the most important theologian of the 19th century, Konstantinos Economou of the Economous, ‘the monastics were the last victims of the Exposition’. The Bavarians who ran the state, together with their Greek theologians who had studied in Germany, as well as Church officials, had no understanding of the aim and contribution of Orthodox monasticism. They saw its value simply in terms of external activity, as is the case in much of the West to this day, and this is why they opposed it. Fr. Konstantinos Economou, who was brought up in the Orthodox Tradition and lived it, interpreted the relevant decisions as follows: The sudden conversion of all monasteries into coenobia was ‘the first, most incisive manner of dissolving the monasteries’. Forbidding the establishment of a coenobium with less then thirty monks was ‘the second way of destroying monasteries’. And finally, he called the exclusion of people under 30 from the monastic life ‘the third and most forceful way of extinguishing the monastic state’.  On the basis of the Exposition, only four women’s monasteries were allowed to function on Greek soil.

[1] While it is clear that this was a remarkable family, there would also have been a practical reason for having members of prominent families as the leading figures in monasteries. This family was very wealthy and the children would have been brought up to assume the responsibilities involved in running large estates. Saint Makrina, for example, was engaged to be married and would have been expected to run a large household, rather like a chatelaine in medieval Western Europe. Apart from their sanctity, their administrative experience alone would have made them prime candidates for a senior position in a monastic house. WJL.