The Representation of Divine Names

This is how Dionysius describes the divine names, in the fifth chapter of his treatise:

‘The divine name “Good” tells of all the processions of the universal Cause; it extends to beings and nonbeings and that Cause is superior to being and nonbeings. The name “Being” extends to all beings which are, and it is beyond them. The name of “Life” extends to all living things, and yet is beyond them. The name “Wisdom” reaches out to everything which has to do with understanding, reason, and sense perception, and surpasses them all.’[13]

As we can see, Dionysius places hierarchically the above names with the following order: Good, Being, Life and finally Wisdom.[14] This order is of high importance, since the name Good not only deals with the universal providence of God, but it also refers to all processions, beings and nonbeings. As a result, it is treated first.[15] The other three names do not apply to different things, but to more general or specific ways. So, the name Good is more inclusive than the second name in the sequence, which is Being, because it incorporates God in a way that the latter does not. Then, Being refers to God’s relation with living and nonliving beings, Life refers only to living beings and at last Wisdom applies to everything related to understanding, reason and sense perception.[16] 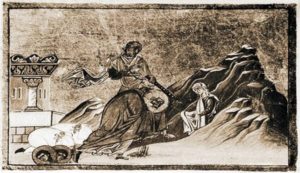 Yet, the name Good is the one which illuminates the intelligible and intelligent beings,[17] as Dionysius explains in the fourth chapter of his treatise:

They can strive towards angelic. By means of the angels as good leaders, they can be uplifted to the generous Source of all good things and, each according to his measure, they are able to have a share in the illuminations streaming out from that Source.[18]

According to Dionysius, the intelligible and intelligent beings owe their existence to the shining of the Good.[19] Beyond their illumination, their perfection and purification derive from the Good, in such a way that these beings manifest this source as its angels or messengers. Dionysius describes the qualities of angels, including the triad purification, illumination and perfection,[20] which is the basic tool to speak for hierarchy.

Also, there is a wide range of names which are connected with the name Good by Dionysius. For instance, the Beauty firmly links with the Good, because it concentrates all things together, providing the harmony whose existence is really important to a hierarchical universe.[21]

After the sequence described above, Dionysius proceeds with less important names and ends up to the biblical combination of Holy of Holies, King of Kings, Lord of Lords and so on.[22] Nonetheless, in the end Dionysius returns to a higher level of names, by mentioning the name One, which is presented as the most enduring of them all. This seems to be a progression until the final chapter’s return to high.[23]

It could be said that the name One actually distinguishes the role of God, which is certainly already known. It means that ‘God is uniquely all things through the transcendence of one unity and that He is the cause of all without ever departing from that oneness’.[24] This implies that God is naturally placed on the top of Dionysius’ hierarchical system and such an important name, as the One is, could only characterize him. So, the name One could be considered together with that of Good, as the two most important names that they are attributed to God. They are the two names which describe the nature of God better than any others.

Also, by calling God as One, Dionysius refers to the monotheistic character of Christian religion and to the unity of God in relation to the other two persons of the Trinity.[25] In general, one could say that Dionysius in the Divine Names seeks to interpret the biblical names of God, starting from the highest level of our understanding and ideas.[26]

It is also worth noting the Dionysian use of the word τάξις, when defining the character of hierarchy. The names of God are summed up, recapitulated, in the taxies of the hierarchies.[27] Yet, the divine θεσμός determines the hierarchic order and the expression of God’s dominant love. In the Divine Names these two words appear together to illustrate and distribute the kingdom of God.[28]

If someone wants to seek the influences and the background of the Divine Names should focus on Neoplatonic sources and especially to Proclus.[29] As we have seen, Dionysius starts his discussion with the name Good and finishes with that of One. But the triad of the names Being-Life-Wisdom is reminiscent of Proclus’ triad Being-Life-Intelligence. Some other names in the Divine Names are evidently scriptural and some others combine Neoplatonic and biblical elements.[30]

Although Dionysius is obviously influenced by a polytheistic tradition, where the divine names refer to the gods of Greek mythology, he manages to distinguish his system very efficiently. On the first hand, he modified the notion of procession, by claiming that being derives only from God; and on the second hand, he changed the doctrine of divine names, that his predecessor maintained, to a doctrine of divine attributes.[31]