The wedding in Cana brings to mind the well-known image of the prophets in the Old Testament, especially Hosea, regarding the marriage between God and His people. The recognition on the part of Jesus’ that there was no more wine and her indirect appeal to Him echoes, in a sense, the state of the people of Israel. The potential of the old nation had been exhausted and so they turned to the Messiah, obviously seeking His intervention. He does, indeed, intervene and re-creates the people; He doesn’t exterminate the old. The wine doesn’t appear out of nowhere, but from pre-existing matter within the divine creation, from water. But the water is a clear reminder of the old order of things, of the sacrifices in the temple and of the purifications in the daily ordinances of the law. In any case, the implication of the narrative is clear: There were, in the house, six stone water jars for ‘the purification of the Jews’ (2, 6). Jesus transformed the water for purification into the wine of the new age, of the New Testament. Besides, this Eucharistic reference will be continued throughout the rest of John’s Gospel. After the wine, mention will be made of bread, in chapter 6, with the multiplication of the five loaves and Christ’s long homily on ‘the bread of life’. 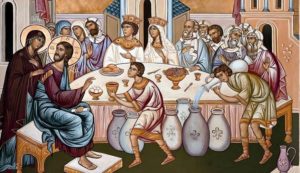 According to the above theological interpretation and the one more generally accepted, this extract expresses the replacement of the old order of things with the new, the old worship with the Divine Eucharist. The old comes to an end by itself, and the new comes with the life, death and Resurrection of Christ, in order to meet the needs of the human race. The old couldn’t redeem us from death, whereas the new brings life, and, indeed, ‘an abundance’ of it. We shouldn’t forget that John was called ‘the Theologian’ and that his texts have amazing theological depth, with subtle and refined meanings. The bread in chapter 6 and the wine in chapter 2 can’t be unrelated to the Divine Eucharist.

The great Dostoyevsky also compares the miracle in Cana to the renewal of the world and to the resurrection. In the Brothers Karamazov, the extract concerning the miracle at Cana is read over the relics of Starets Zosima. The young Alyosha leaves in such transports of enthusiasm that the whole world seems to him to have been renewed. So much so that he falls to the ground and kisses the earth.