Elder Iosif Vatopaidinos made his renunciation at the age of 16, in the summer of 1937, at the Holy Monastery of Stavrovouni in Cyprus. The reason behind his doing so was the following event. He’d watched a film, a comedy, and afterwards felt a great vacuum in his life, a profound necrosis as regards everything transient. He was standing on a bit of a hill in the town of Paphos that evening, when suddenly, within an other-worldly, gladsome light, the comforting, form of the Lord, full of love and peace, appeared. Christ manifested Himself to Him and said: ‘Is this why I created people? People are immortal’. After this vision, he decided to abandon worldly things and become a monk. At his tonsure he was given the name of Sofronios and he lived in the monastery for about ten years. He left, ostensibly because of the question of the calendar, which had divided the monastery into two camps, but in reality because he was being led by God’s providence. So, with the blessing and encouragement of the spiritual father of the Monastery, Papa-Kyprianos, he left to go to the Holy Mountain, for a higher form of the spiritual life. 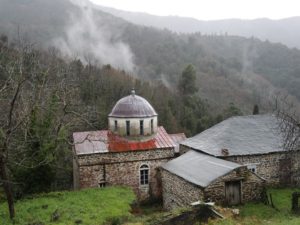 For a time, at the beginning of 1947, he stayed with the venerable Elder Nikodimos and the six members of his brotherhood in the ascetic ‘hut’ dedicated to the Ascension, which is just below the church in the Skete of Saint Ann. The brotherhood were woodworkers. By God’s providence, when Elder Iosif the Hesychast needed a wooden door for the chapel in his hermitage, which was dedicated to the Honourable Forerunner, he ordered it from the brotherhood at Saint Ann’s where Fr. Sofronios was a temporary guest.

At that time, Elder Iosif the Hesychast was living in Little Saint Ann’s, with his fellow ascetic Father Arsenios, and Father Athanasios, his brother ‘after the flesh’, in the sheer, desert caves. He was greatly respected by devout Athonite monks as a teacher of tranquillity of mind and the Prayer the Heart, as an instructor in the monastic state. Father Sofronios was so impressed by the stature and words of Elder Iosif that he asked him to take him into his brotherhood, but the Elder refused. The insistence of young Sofronios, as he then was, was such that the holy Elder promised him that he would first pray and he would give his answer the next day, when Sofronios returned. In the end, it was positive.  It later became known that the venerable elder had received a revelation which persuaded him to take on the young Sofronios as his first disciple. He saw a little bird fly and settle on his shoulder. As the elder looked at it, baffled, the bird opened its mouth, but instead of singing began to theologize. In this way, God made it known to him that the young Sofronios would mature spiritually under his guidance, that he would become a vessel of the Grace of God and that he would receive the gift of theology.

He fitted in straight away with the new way of life of the Elders, which was truly hesychastic. From morning till noon, handiwork, so that they could earn a living, though as a rule, it wasn’t permitted for the obedience to stretch past the designated hour of noon. Thereafter came Vespers with a prayer-rope, each one separately, or a little reading, followed by a meal, or rather supper. They finished at nine o’clock Byzantine time (that is about three or four o’clock in the afternoon), after which they were given a blessing by the Elder for a brief sleep. After their rest, they prepared anything needed for the next day and then went to their individual cells, where they kept a prayer vigil until midnight. If they had a Divine Liturgy, it was held after midnight; if not, that was the time for spiritual study. Included in this rule was the disclosure of thoughts. Concerning this, our own Elder Iosif told us: ‘So we stayed by ourselves and after midnight or even earlier I’d go to the Elder’ whose hut was at a short distance from us, and I’d tell him my thoughts and anything else that had happened to me. He’d tell me spiritual things and anything he wanted for our correction and for our spiritual life. This was the rule we kept even when others arrived and the brotherhood grew. Before that hour, though, the Elder didn’t receive anyone, and that was something he’d kept from the beginning [1].

[1] Talk to an Assembly of the Brotherhood.