Inside the Holy and Great Council

There continues to be much said and written about the historic Holy and Great Council of the Orthodox Church. The discourse is often critical and infiltrated by individuals who hold extreme – some say fanatical – positions, criticizing and condemning those who oppose them.

One hierarch told me this week that his elderly mother called him after being “informed” about the Council and proceeded to list for him all of its shortcomings.

Listening in on the deliberations at the Orthodox Academy of Crete, I thought it might be helpful for the Orthodox faithful – as well as those interested in the Council and Orthodoxy more generally – to get a sense of the atmosphere and goings-on in the room.

Of course, the deliberations are confidential (leaks to various media outlets notwithstanding) and, to the Orthodox faithful, more than secret, they are sacred.

Thus far my principle takeaway is that the assembled hierarchs (primates, metropolitans, archbishops, etc.) display a deep sense of ecclesiastical responsibility. The hierarchs review the texts with diligence, discussing and deciding on how paragraphs should be formed, sentences structured, and words chosen for the advancement of Orthodoxy and edification of the faithful. 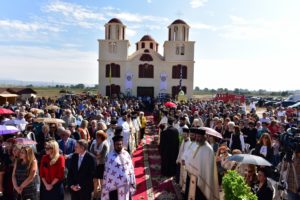 There are differences, to be sure – find me two people who agree on everything, let alone a few hundred. Disagreement is normal and healthy (I would be more concerned if everyone agreed on everything).

At the same time, let us not be naive and paint a completely rosy picture of the Holy and Great Council. There are certain challenges within Orthodoxy which the Council has highlighted – although most of them, like ethnophyletism, are well known.

These challenges have to be addressed. But obsessing on them I think misses the main point of the Council, which is that (most) local churches have come together to talk as a family. To get to know one another. To build trust and goodwill in Christ.

As one hierarch remarked to me, do people actually think that if we come together to discuss issues that we will then fall into heresy?

An additional thing that has stood out to me is how nuanced issues are and how much pastoral care, love, and mercy is needed to shepherd the faithful in today’s society.

Those on the extreme – and who electronically yell the loudest – often crowd out more balanced discourse with their strict black and white interpretation.

The Church of course has a certain taxi (order) that should be respected and followed. But it also has pastoral responsibilities that must be met. It has to care and comfort everyone in society, especially those in need.

For example, during the discussion on marriage, the issue of whether a widowed priest can remarry was debated. During the break, a hierarch told me a story of a young priest with a 1-year old baby who became a widow and the difficulties, including psychological challenges, he had to deal with because he lost his wife and could not remarry. How should the Church deal with such instances? Isoikonomia in order?

Whether one agrees with allowing widowed priests to re-enter into marriage or not, there are practical and pastoral considerations. Self-righteousness serves no one. Much spiritual discernment is needed.