Gian Giudice, is the new Head of CERN’s Theory Department. Following his inspiring talk during the FCC Week 16 we discuss with him about the LHC results and the present global landscape in particle physics as well as his view on the future developments in the field.

Following the LHC discoveries, how would you describe the present situation in the field of particle physics? 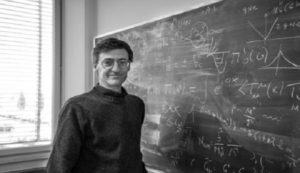 However, this uncertainty only adds to the excitement because the history of physics has taught us that moments of crisis are followed by scientific revolutions. We are living through a moment of challenges and opportunities.

The recent story of the 750 GeV bump is an example of how new data can completely shift the focus of the scientific community. Theorists are ready to embrace new ideas. The discovery of the Higgs boson has been a crucial chapter in our understanding of the electroweak breaking sector. But our understanding is not complete. There are still many open questions.

Do you think that future data from the LHC could help us answering these questions?

All of us are expecting from future LHC data the indications of how to proceed. Theorists need these data to get clues on how to answer open questions about electroweak symmetry breaking, the role of naturalness, and the possible existence of dark matter in the form of massive weakly-interacting particles.

But LHC data will not only affect theoretical research. The future of experimental particle physics will be shaped by what’s going to happen in the next few years. During the 2016 Future Circular Collider week in Rome I was impressed to see how fast the landscape of high-energy physics is changing. The interest of countries like Japan and China is making the landscape much richer and promising, while new projects at CERN are taking shape thanks to important technological R&D efforts and advancements. Things are already moving fast, but I expect that new LHC data will accelerate this process dramatically.

I would like to take this opportunity and ask you about the foreseen HL-LHC upgrade of the LHC and how data from this phase could enrich our present understanding and possibly help us in defining the next priorities for HEP?

HL-LHC is the natural continuation of the LHC programme. New physics may hide in rare processes and their exploration requires large data samples. This is why a high luminosity phase is a unique discovery tool. HL-LHC can collect in a single year the same amount of data recorded by the LHC during its entire operation period of about ten years. This leap in statistics would allow us to improve the determination of the Higgs couplings by about a factor of two or, in the case of rare processes like the decay of the Higgs into two muons, by about a factor of three. This is like using new high-resolution lenses in the microscope that scrutinizes the Higgs boson. We are looking for unexpected features in the Higgs couplings, which could be visible only when high-resolution lenses are used.

It is still premature to assess the real exploratory power of HL-LHC. If new discoveries are made at the LHC, it is likely that high statistics will be the crucial ingredient to fully comprehend the meaning of these discoveries and unravel the correct theoretical interpretation.

Looking back why do you think that there were so high expectations for new physics at the LHC?

Even before the Higgs discovery, the Standard Model of particle physics worked beautifully. However, its validity was limited in its energy domain. We knew that something must have come in at the energies explored by the LHC. Indeed, that “something” was found to be the Higgs boson. The theoretical prediction was confirmed by experiments. Our high expectations were correct and it was a triumph of the combination between theoretical and experimental physics.

Now that the Higgs boson has been discovered, the Standard Model may seem a complete theory. And yet theorists, even before the starting of the LHC, had high expectations that the Higgs could not be the full story. The reason for this belief is that a fundamental scalar particle raises a problem of naturalness. We still don’t understand how this issue is resolved in nature, but it was expected that its solution involved new physics within the LHC energy domain.

During your talk you referred to the issue of naturalness and reflected on its meaning for future searches. How do you think that a concept like naturalness could inform our efforts to answer some of the open questions?

Naturalness is a central concept in particle physics today. It is related to the description of nature in terms of a stack of effective quantum field theories, in which each theory describes a specific domain of scale distances. This is a powerful tool, because it allows us to separate our description of nature into many different intervals of distances. Then, we can restrict our considerations to a limited range of scales and derive a consistent theoretical description of the relevant phenomena, without full knowledge of nature’s inner workings at all possible distances. Naturalness is a reasonable logical consequence of this hierarchical structure of nature made of a stack of theories with scale separation. Of course, naturalness is not a logical necessity for a consistent universe. It could be that nature has chosen to create a universe without scale separation, in which phenomena at completely different distances are inextricably linked. If that were the case, our approach in terms of effective quantum field theories is doomed to fail. 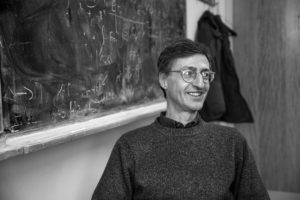 Do you think that the concept of naturalness could also help us in forming different questions?

Certainly the concept of naturalness will remain central in forming and posing our questions about the electroweak symmetry breaking sector, no matter what the LHC finds. However, it is quite possible that we will have to reformulate the concept and use new theoretical tools to address it.

It is premature to tell what the new directions will be. Some proposals have been put forward for overturning the conventional approach to naturalness in the Higgs sector. One idea is based on the multiverse, in which our universe is selected by anthropic considerations in a process similar to a Darwinian natural selection. Other ideas are based on relaxation during cosmological evolution, in which our universe is singled out by a process similar to self-organized criticality.

Do you think that designing and building future machines could lead to rethink about some of the fundamental questions in modern physics?

Physics is a natural science. No matter how fascinating theoretical speculations can be, we need data to verify ideas and guide us in our research. At the moment, pushing the high-energy frontier looks like the most promising direction to make progress in our search for the fundamental principles of nature.

How would you describe the present field in theoretical physics?

As I said previously, we are living times of uncertainty. The field in theoretical physics is becoming more fragmented and physicists are trying to pursue different directions. I expect that new data from the LHC may trigger a big change in the field of theoretical physics. It may happen already this summer, as the hint of the 750 GeV bump is really tantalizing.

Do you think that after the LHC we may stop referring to the Standard Model?

I hope so (laugh!). The Standard Model is one of the greatest achievement of human intellect. It is nearly unbelievable that all natural phenomena, in spite of their emergent complexity, are the result of a single simple mathematical principle: gauge symmetry. And it is fantastic that humans were able to discern this secret of nature and discover the principle of its inner conceptual simplicity.

But physicists are always thirsty for deeper explanations. In spite of its tremendous success, the Standard Model leaves some questions unanswered. Its structure is not unique and many of its parameters cannot be computed within its theoretical framework. There are good indications that the Standard Model is not the ultimate theory of nature, but is only another effective quantum field theory valid up to a limited scale. We don’t know what the next step in nature’s construction is and not even if we will ever be able to prove that there is another step. But we cannot give up: we need to explore further and seek answers.

I really hope that after the LHC we will refer to the Standard Model as an old beautiful artefact left on display in a dusty museum of science, while physicists will be busy playing with a brand new theory whose name I cannot even imagine now.