On the resurrection of the dead, for those with a strong stomach 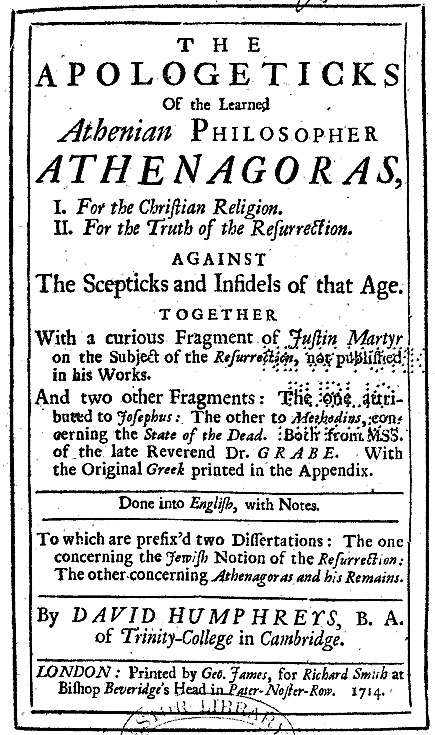 I was reading the Early Christians Apologists the other day and came across Athenagoras the Athenian, about whom I know almost nothing. I am, apparently, not alone in this, since nobody seems to know much about him except that he was born ca. 133, perhaps in Athens, and died in ca. 190, again probably in Athens. He appears to have been very influential and is now best known for two works which have survived from what was no doubt a much larger corpus: On Christians, addressed to emperors Marcus Aurelius and Commodus in which he defends Christians against the charge of atheism; and On the resurrection of the dead, from which this extract is taken. He was obviously a philosopher of considerable force and erudition and the fact that I’ve chosen this extract as something of a curiosity should not detract from the fact that On the Resurrection is well-argued and well-written.

About the fact that, after death, the body disintegrates:

[The body] has been carried back again to the original elements, resolved into these in accordance with natural law. This appears to have greatly confused some people, even those admired for wisdom, who, I don’t know why, think that these doubts, put forward by the many, deserve serious attention. 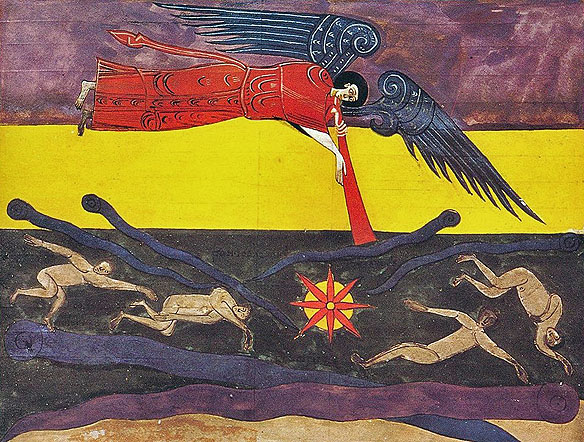 The Resurrection, Illustration from the Spanish manuscript of Facundus, 1047

IV. These people say that many bodies of those who have met an untimely death in shipwrecks and rivers have become food for fishes, and many of those who perish in war, or who, from some other harsh cause or circumstance are deprived of burial, lie exposed and become the food of any animals which happen to come across them. In the first place, they say that, since these bodies are consumed, and the members and parts composing them are broken up and distributed among a large number of animals, and, by means of nutrition, are incorporated into the bodies of those that have fed on them, it then becomes impossible to separate them. Secondly, they present another argument which is even more difficult: when animals fit for human consumption, which have fed on the bodies of human beings, pass through the stomach and become incorporated into the bodies of those who have eaten them, it is evident, they say, that the human body-parts which served as nourishment for the animals which ate them, then pass into the bodies of other people. This is because the animals which, in the meantime, fed off them, carry the nutriment into the people whose food they become […] and from these things they establish – supposedly – the impossibility of the resurrection, on the grounds that the same parts cannot rise again in two different bodies, because either the bodies of the former possessors cannot be reconstituted, since the parts which composed them have now passed into others; or, if they have been restored to their original ‘owners’, then the bodies of the last possessors will be deficient. 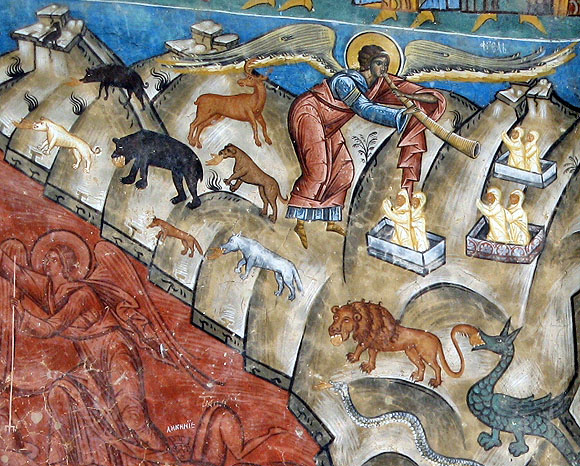 V. But it appears to me that people such as this, in the first place, are ignorant of the power and skill of Him Who fashioned and regulates the universe, Who has adapted nourishment to be suitable and proper for each animal, and has not ordained that everything in nature shall enter into union and combination with every kind of body. He is able to separate what has been united in this way, and allows the nature of each created being or thing to do or to suffer what is naturally suited to it. And He sometimes hinders, allows or forbids whatever He wishes, and for the purpose He wishes. Besides, these people have not considered the power and nature of each of the creatures that nourish or are nourished, otherwise they would have known that not everything which is taken for food under the pressure of external necessity proves to be suitable nourishment for the animal, but that some things go bad as soon as they come into contact with the folds of the stomach, and are emitted in one way or another. These substances do not even undergo the first and natural digestion, much less become incorporated with that which is to be nourished. It is also the case that not everything which has been digested in the stomach and is converted actually reaches the parts to be nourished, since some of it loses its nutritive power even in the stomach. Some of it does so on further conversion, and the digestion that takes place in the liver further separates it and it passes into something else which has no nutritional value. The conversion which takes place in the liver does not all result in nourishment, but the matter converted is separated as refuse in accordance with its natural purpose. […] 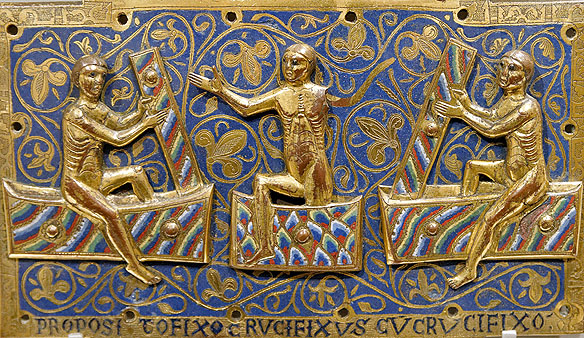 VII. [As for the resurrection], the bodies that rise again are reconstituted from the parts which properly belong to them, whereas none of the things mentioned above is either a part or has the quality or place of a part. They do not remain for ever with the parts of the body which have been nourished, nor are they resurrected with the parts that rise, since blood, phlegm, bile and breath no longer contribute anything to life. The bodies once nourished will no longer require the things they used to, given that, along with any deficiency and decay, the need for food will also be taken away.