Our Lady, the Mother of God and the Paraclitic Canon – Part 1

Our Most Holy Lady, the Ever-Virgin Mary is a wonder and mystery which not even the angels can understand: “Heaven was astonished and the ends of the earth amazed, for God appeared bodily to mankind, and your bosom became broader than the heavens. Therefore, Mother of God, the leaders of the orders of angels and of men magnify you”, writes the poet of the Paraclitic Canon. She is, as Gregory the Theologian says, “God after God”. Of course, the Fathers also refer to her position elsewhere, clarifying it: “Let Mary be held in honour. Let the Father, Son and Holy Spirit be worshipped, but let no-one worship Mary”, (Saint Epifanios).

Regarding the genealogy of Our Lady, we’re told in the Gospel according to Saint Luke that she was “of the house of David”. The protoevangelium, as it is called, of James, the Brother of the Lord, tells us that the priest Matthan married a Mary and she bore four children: Jacob, who was father to Joseph, the betrothed of Our Lady, Salome the midwife, Sobe, who bore Elizabeth the Mother of John the Baptist and Ann who gave birth to Mary, the Mother of Jesus Christ, the God/Man.

She was given the name Mary by her parents Ioakeim and Ann, but the name she mainly goes by in Orthodoxy is Mother of God. This term was ratified at the 3rd Ecumenical Synod of the Church in 431. But in order to express its great love and respect towards the Virgin, the Church has attributed to her a host of honorific titles and epithets. A typical example is Saint Nektarios, who devoted five thousand verses to her honour, comprising his “Theotokario”*.

From the Gospels in the New Testament we learn that the Daughter of Nazareth received her Annunciation from the Archangel Gabriel; visited her cousin Elizabeth; who was already pregnant with the Honourable Forerunner, John the Baptist; gave birth to the Saviour of the world in Bethlehem; fled to Egypt to protect her child from those seeking to kill Him; sought her twelve-year-old Son in Jerusalem, while He was debating with the teachers in the Temple; was present at the wedding in Cana, where she interceded with her Son; accompanied Him to Golgotha and witnessed the divine events of the Crucifixion, the burial and the glorious Resurrection of the Lord and then the descent of the Holy Spirit which occurred in the upper room on the day of Pentecost.

We learn more about the life of the Mother of God from Patristic Tradition, which is just as valid a source as the Apostolic Tradition, of which it is the natural continuation, based on the experience and guidance of the Holy Spirit. The work, On the Divine Names, by Saint Dionysios the Areopagite, the Encomia of the Dormition of Our Lady which were written by various saints of the Church such as John the Damascan and Andrew  of Crete, the hymns and iconography of the Church – all these are basic sources. We also find information in the Apocryphal narrative of Saint John the Theologian on the Dormition of Mary, the Mother of God. 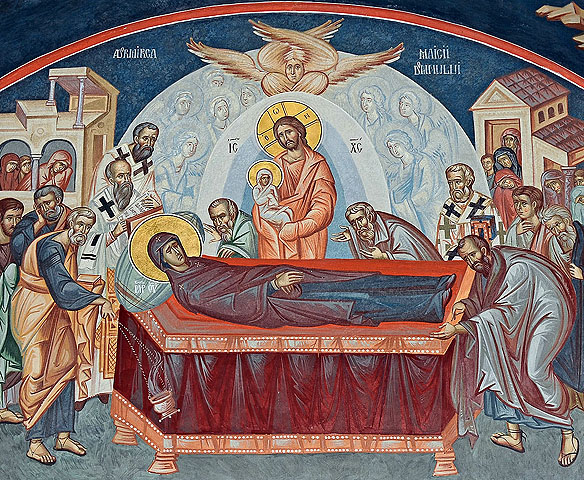 Just as the Archangel Gabriel had been her attendant all through the previous years, so now he brought her the message that, in three days, her Son would come and take her all-pure soul. After the divine message, Our Lady went up onto the Mount of Olives, where she prayed to her Son and God.  She then told the Church about what was about to happen. On the day of her Dormition, the Grace of God, in the form of a cloud, brought the Apostles, who were far away, to the house of Saint John the Evangelist in Gethsemane, so that they could take her blessing and experience her blessed Dormition. Saint Paul, Timothy the Apostle, Saint Dionysios the Areopagite and other saints of both sexes were also present. Our Lady comforted and advised the apostles and prayed for the salvation of the whole world, until the morning, when her Son Himself took her spirit.

Then, “her God-bearing body, with angelic and apostolic hymnody was carried and buried, and was laid in the grave in Gethsemane”, even though the Jews tried to impede the holy rite. It is reported that a Jew called Ieronias, attempted to stop her interment, with the result that his arms were cut off by an invisible force. Fortunately, he repented and was immediately healed. A similar fate befell all those who approached Our Lady with impiety in their hearts: they were blinded, but had their sight restored when they repented.

The Holy Apostles then interred the most holy body of the Mother of God and remained there for three days, while the “presence of the choirs of angels singing hymns continued unceasing”. John the Damascan records in his Encomium on the most august Dormition of the Mother of God: “After the third day, when the angelic hymnody had ceased, with the apostles still present, one was brought to them, and since he wished to reverence the God-bearing body, they opened the grave. They were unable to find her all-praised body, only the burial objects, and were filled with the ineffable fragrance she left behind”.

The apostle who had been absent on the day of the Dormition was Thomas, according to tradition. Thus, on the third day after the event, when Our Lady was due to be transposed in the body to be with her Son, the Apostle Thomas was borne to Gethsemane by the Grace of the Holy Spirit, where he saw the Mother of God being taken up into the heavens. Our Lady gave him her belt, which is now kept as a prize possession in the Holy Monastery of Vatopaidi.