People who offer ‘your own from your own, in all things and for all things’ serve God truly and pleasingly. That is, people who recognize that whatever they have is a gift from God. They believe that they’ve got nothing of their own to offer. Everything’s from God and they take from that and offer it to God, together with themselves, their world and their relations with the world. They keep nothing selfishly for themselves. They offer themselves without reservation. They give everything in order to receive everything. They die in order to live. And they offer everything in Christ and for Christ. In all things (always) and for all things (for all God’s gifts). 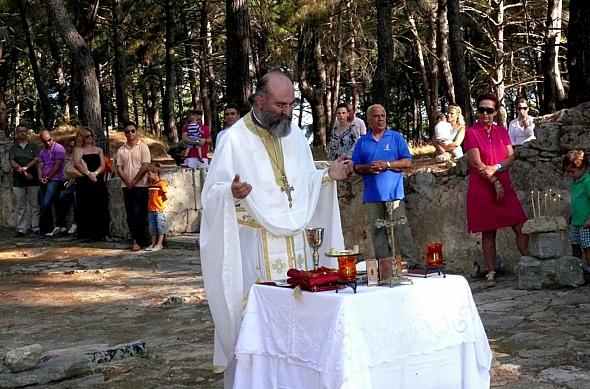 So the whole of people’s lives (even after the Divine Liturgy and outside the church) becomes service, offering, relationship, sacrifice, communion and thanksgiving. The whole of life is transformed into a theanthropic life.

The two hour Sunday Liturgy becomes a twenty-four hour, daily Liturgy. As Orthodox, when we speak about a liturgical life, we don’t mean our short liturgical offering in the church, but the whole of our life, which, starting with the liturgical actions in the church, becomes one of liturgy and worship.

Orthodox Christians aren’t schizophrenic. They don’t live a liturgical life inside the church and an unliturgized life outside. They spend as much time as they can in church (Liturgy and services) so that they’ll be able to live outside the church in a manner as close as possible to the spirit, the climate and the ethos of the Divine Liturgy.

Through worship in the church, the theanthropic life becomes ingrained in them and is then capable of transforming all the facets of their everyday lives.

So Christians permeated by the Liturgy live in the unity of faith and life, the divine and the human, the created and the uncreated, the living with the departed, the present age with the future, their own person with others.

This unity was also experienced by the Greek, Orthodox people when, and as long as they had an ecclesiastical life. There are still, in Greece, traditional, Orthodox people and communities who live in this unity. The centre of the whole life of traditional Orthodox settlements (villages and neighbourhoods) was the parish church, as the katholiko is in monasteries. In villages on Evia [Euboea], the parish church to this day is called the katholiki. (i.e. katholiki ekklisia).

Birth, death, baptism, marriage, school, work, social relations, joys, and sorrows, all the expressions of social life were linked to the Liturgy and the Church. In the end, they became the Church. So the everyday functions of life found their unity and order of precedence within the Divine Liturgy.

The further the Greek people distance themselves from their Orthodox roots, from their life-giving, theanthropic tradition, the less the various functions of life are organically linked to the Divine Liturgy, which is why they stop working properly, which is to say they fail to unite people or help them to live as images of God.

The various functions outside the Divine Liturgy deconstruct the human person. This is clear from the basic function of life, procreation. Within the Divine Liturgy and the Church, this fundamental function is transformed, is blessed with grace, and contributes towards the rounding out of the human person. Outside, it’s the slave of egotism, it undoes personalities and is a torment. People today have bitter experience of this situation.

Orthodox coenobitic monasteries are models of how people and their communities should function. The centre is the main church (katholiko). Buildings and obediences are all organized around the main church. The starting-point of the common life is the daily celebration of the Divine Liturgy. The purpose is the worship of God and the offering of the whole of life to Christ. This is how life can be common, faith and love universal, death can be vanquished and everything made new and given a different role in a strange and most fitting adjustment.

Orthodox Christians can’t be Orthodox unless they live liturgically. Unless the Divine Liturgy and worship are not merely ‘opportunities’ or part of their timetable, but are, instead, the life-giving shoot grafted on to their lives and transforming them, the centre, the basis, the beginning and the end. It’s only through the ‘your own from your own’ in the Divine Liturgy that people truly become themselves, that is images of God.