What is the Place of Oikonomia in the Abortion Question?

Having now examined oikonomia in relation to the so-called “hard cases” of pregnancy due to rape, incest or that which threatens the life of the woman, as well as that which will result in the birth of a “defective” child, the question still remains: is there a place for oikonomia in the abortion question? In practice, oikonomia is presently being applied in this situation. The Orthodox Church today asks of those who are involved with abortion only sincere repentance and a change of heart and mind in order to be received back into the Community of the Faithful. The ecclesiastical penance of ten years excommunication as directed unchanged, in the Canons, is very rarely, if ever, required of those who repent of their involvement with this most heinous of sins and undergo the proscribed penitential exercise of Confession and Absolution. This absolution, in some extreme cases, may involve a proscribed period of abstention from the Eucharist and/or other penitential exercises but this is a discretionary matter between the penitent and his or her priest. 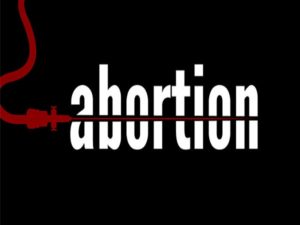 Who are the Guilty?

For the woman who has had an abortion (and survives), the guilt and pain attending this act are far more bitter and galling than any penance which could possibly be prescribed by the Church. There are priests who tell of women who continue to agonize over an abortion after countless confessions and absolutions. The duty of the Church with respect to these poor sufferers is to bring them to peace with themselves and God, purging them of the delusion that they are unworthy of God’s forgiveness and salvation. Bringing the Peace of God to a woman so blighted is a spiritual labor which may take years. Such is the deadly fruit of abortion for its second victim, the woman.

However, and in addition, for every woman who has an abortion, there are hundreds, perhaps thousands who have contributed to her sin and suffering and the death of her child and bear the heavy burden of guilt no less (and, in some cases, more so) than she. These too, if they are Orthodox Christians, must come before Almighty God in the Sacrament of Penance, repent and turn away from their sinful acts.

Finally, the guilty are all who stand idle and allow the killing to continue without protest. To paraphrase the great philosopher Edmund Burke, evil will triumph when good men do nothing. The Responsibility of the Church There is not, nor can there ever be, an oikonomia which allows people engaged in such sinful activities to go to Confession on Saturday, Communion on Sunday and work as usual on Monday. If there is no change of heart, no turning around, if they believe that they can continue to spill innocent blood however removed they might be from the abortion procedure itself and remain an Orthodox Christian, they are deluding themselves. For the Sacrament of Penance to be valid it is necessary for them to abandon their sinful lives, repent and try to make amends for the great evil they have done. Any priest or bishop who practices oikonomia by knowingly allowing such people to receive the Body and Blood of Jesus Christ without demanding that they cease their bloody course will have to answer for the souls of those who have profaned with his permission, the Holy Eucharist.