3. A phrase which can be found in the prophecy concerning the Messiah by the Patriarch Jacob provides St. John Chrysostom with the opportunity to speak of the sacrifice of Christ and the Divine Eucharist. “He will wash his garment in wine, his robe in the blood of grapes”. Chrysostom says: “See how the whole of the mystery has been implied for us. The faithful understand the significance of the words: ‘He will wash his garment in wine’. I believe he calls the body the garment which He condescended to put on because of the mystery of divine dispensation. Then, so that you will learn precisely what he called wine, he goes on to say that ‘he will cleanse his robe in the wine of the grape, which is red, like blood’. See how, through the name of blood, His slaughter is implied for us, as well as the cross and the whole dispensation of the sacraments”[16]. 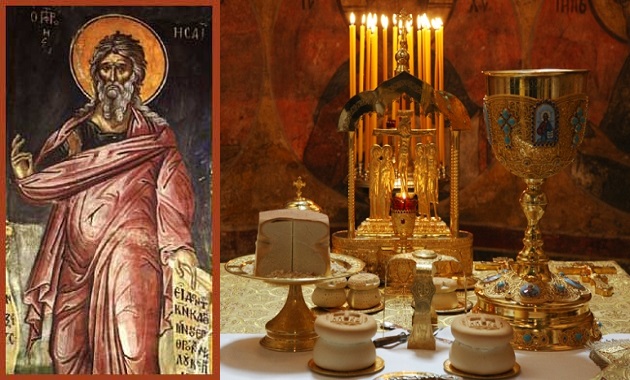 The children of the Patriarch Jacob heard this Messianic prophesy, but did not enjoy the reality about which he spoke. For him, the prophecy was an enigma. With the coming of the Messiah, the enigma was transformed into knowledge of life. Knowledge acquired by those who were baptized in the name of the Father, the Son and the Holy Spirit. It is they who cleanse “their robe in the blood of grapes”.

4. The Divine Eucharist is also like the sacrifice of the Prophet Elijah. Just as then, when, following the Prophet’s prayer, fire descended from heaven and devoured the sacrifice, in the same way now, the priest stands before the altar and brings down “not fire, but the Holy Spirit. And he prays intensely, not for flame to come from heaven to consume that which is before him, but for divine grace to come upon the sacrifice and with it to kindle the souls of all”[17].

5. Speaking of his call to the prophetic office, Isaiah, too, refers to a wonderful vision which preceded the call and which prepared him to receive it:

“In the year that King Uzziah died I saw the Lord sitting upon a throne, high and lifted up; and the train of his robe filled the temple. Above him stood the seraphim…  And one called to another and said: ‘Holy, holy, holy is the Lord of Hosts; the whole earth is full of his glory!’ And the foundations of the thresholds shook at the voice of him who called, and the house was filled with smoke… Then one of the seraphim flew to me, having in his hand a burning coal that he had taken with tongs from the altar. And he touched my mouth and said: ‘Behold, this has touched your lips; your guilt is taken away, and your sin atoned for’” (6, 1-7).

For the holy Fathers who wrote the Divine Liturgies, there was absolutely no doubt as regards the significance of the vision: the Prophet is describing for us the celestial and angelic worship. This ultramundane worship was unknown to people before the Lord’s coming to earth. Between heaven and earth there was a great chasm. But the incarnation of the Son and Word of God does away with the wall separating them. The chasm was transformed into a bridge which united the earth with the heavens. Angels came down to earth, accompanying the heavenly Lord, and the angelic hymnody, the hymn of victory,  was sung in the house of the glory of the Lord.

According to Chrysostom, this is why, when a bishop is celebrating, “when he stands before the holy altar, offering the reasonable sacrifice, he does not simply call upon us to sing the hymn, but, having first referred to the Cherubim and recalled the Seraphim, urges all of us to raise the dread voice and, with the recollection of the angels, to tear our minds away from the earth, saying to each one of us: ‘You’re singing with the Seraphim; stand beside them and open your wings with them and surround the royal throne’”[18]. “That altar was a prefiguration and image of this altar; that material fire was a prefiguration of this spiritual fire. Then the Seraphim didn’t dare touch with their hands, but used tongs, whereas you take it in your hand”[19].

With the tongs, the angel picked up the coal, the type and image of the spiritual fire, Christ. And this coal cleansed the lips of the Prophet, to become the mouth of God. Believers who approach the Chalice of Life “in joy and trembling” receive the fire which cleanses their whole being, consumes the dross and “inexpressibly” cools them. Those who partake of the coal which is Christ at communion do not merely become the mouthpieces of God, but God-bearers and Christ-bearers.

6. Christ’s sacrifice is also the “pure sacrifice” mentioned by the Prophet Malachi: “From the east to the west, my name has been glorified by all the nations and in every place incense is offered in my name and pure sacrifice”. “When did this happen?”, asks Chrysostom. “When was the pure sacrifice offered? You can’t put a date on it, except after the coming of Christ”[20]. Comparing the Divine Eucharist with the Jewish sacrifice, he says “we can say that only the former is really pure. Because it was not made with smoke and the aromas of roasted meats, nor with blood and ransom, but is offered with the grace of the Holy Spirit”[21].

7. All the above prefigurations- events and prophetic words- were harbingers of the Divine Eucharist. In each one, there are details that recall the Eucharistic offering: the bread and wine of Melchizedek, the sacrifice of Abraham of his only-begotten and beloved son, the altar, and the angelic worship of the prophetic vision, the coal. With these details, a picture can be formed of the holy anaphora. But the prototype of this image did not appear in the Old Testament. This is why the picture is simply a shadow of “good things to come”, the presence of which shadow “in the long term will never be able to perfect those approaching it”.

The purpose of the shadow was to announce the coming Truth. With the incarnation of the Word, “the people dwelling in darkness beheld a great light”. With His brilliant presence, Christ illumined “the ends of the earth”. The “old” became new; the corrupt, incorrupt; the mortal immortal. The presence of the Light of Life disperses the “shadow of death”. “Now all things are filled with light”. Everything is bathed in the light and in truth. Our long-awaited, foretasted and, in a variety of ways, prefigured salvation has become a historical and real event.

[17] On the Priesthood, Discourse III.