Teaching the life of Saint Nicholas in kindergarten

An assignment by Christina Tsaka, a student of the Pedagogical Department of Pre-School Education, Rethymnos. Published in installments.

As educators we generally have to set as a goal the conveying of knowledge and values to the children. Under this angle, it is necessary that we transmit religious values to them.
In this particular work we will speak about the Saints and especially Saint Nikolaos, and their connection with pre- school age. Our main focus is the way they appear to the children’s eyes. At first, a reference will be made on the study of Saints in church’s history. In the next chapters we will focus on St Nicola’s life and the way that it is depicted in church, as well as in folk traditions and the way they are preserved in many regions of the country. In the end, we will describe in representations and teaching diagrams the teaching method we will follow in order to teach this subject in a kindergarten’s class.
Our ulterior goal is to analyze this particular subject spherically, and make it clear that it is very important to transmit moral and Christian virtues to pre- school age children. 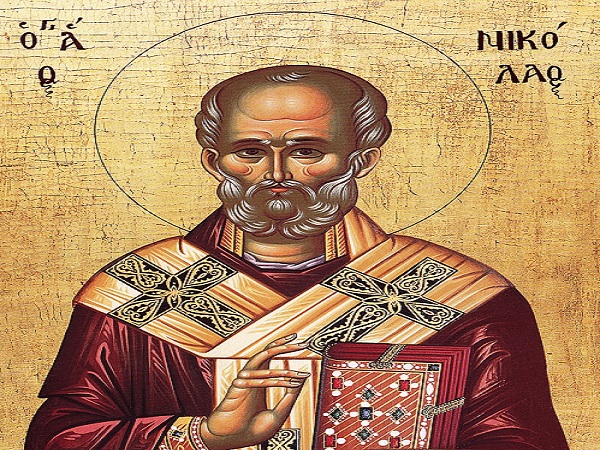 The concept of Saint

Saint or Blessed is a human who has been declared by church as blessed by God. In order to have a person declared as Saint, at least 50 years have to have passed from his/ her death. (Tsamis, D., 2008, pg. 54)
Our church’s saints are not extra- terrestrial beings, but they are humans exactly like us. Saintliness is an open invitation of the Head of Church, Jesus Christ, to everyone, as a pledge of our personal resurrection. Saintliness addresses to and can be achieved by any human in any era of the history.
The Saints took the brave decision to be co- crucified with Jesus (through the martyrdom of blood or conscience) crushing the “old self” through repentance. Their absolute unity with God is “saintliness’s psychology”. In fact, Blessed Justines Popovitz supports that:
“To every Saint, Lord is everything in his soul, in his conscience and in his work”.
For this reason, it is important that we follow Saints in faith, eagerness, love, humble and student- resembling predisposition, because
“without love for the Saints, a person’s orthodox religion is truncated and his sense of spiritual orientation is close- because one has to follow models” (Serafeim Rose)

With the term “declaration” in Orthodox Church we mean “the special acceptance and honor that the crew of a local church attribute spontaneously to some of its deceased members, which had a distinguished dedication to God” (Tsamis, D. 2008).
The declaration of Saints in the orthodox church has been through two eras. The first one begins at the time of the very first church up until the 15th century. The second era begins from the 15th century up to today (Tsamis, D., 2008, pg. 127). The process of declaring Saints and accessing them into the almanac began in Russia in 1547, it was continued by the Ecumenical Patriarch Fotios II, and was completed be Patriarch Athinagoras, in 1955.
The first whose saintliness was declared were the martyrs, as they were honored straight after their death. This happened because martyrdom is a baptism “though which no other flaw can exist”, according to St Gregory the Theologian. In the same way they also honored the confessors, who confessed their faith without death, but “through a lot of suffering and oppression”. Of course, martyrs and confessors only happened to appear in persecutions, during which the Church lacked in external peace. However, this does not mean that God’s Saints only belong in these two categories. According to Patriarch Filotheos Kokkinos, in every era, tested and blessed people appear, the blessed fathers, the shepherds and the teachers of Church are “bloodless zealots among the confessors and the martyrs who are honored in words and in actions”.
The recognition of Saints has always been spontaneous. Especially in cases that the Episcope or the clergy rushed to declare a Saint without having the acceptance of the entire Church, then this declaration was an action without a meaningful content. (Alivizatou, A., 1948, pg. 18-52). However, in the beginning the declaration of a saint had a local profile. This means that the names of the martyrs were written in the martyrologies –hagiologies, legendaries, menologiums or diptychs. And, depending on the fame of the honored Saint, this honor was generalized, until it was accepted by the entire Church.
Many times, the recognition of Saints happened like an official Synodal Act of the Church, when the honor of the Saints was about to be generalized, as Patriarch Filotheos informs us in what he has written about St Gregory Palamas. Nonetheless, this practice was not established officially for the declaration of Saints, it was not even preserved later on. In fact, various neomartyrs were declared without any official recognition. However, even those who were declared as Saints with an official Synodal Act, they had already been honored as Saints by the people.