The Nativity of the Mother of God, the Consolation of Humankind (part 2)

And now we come to another matter: I want to choose an allegory, beyond the blessed hopes that divine grace inspires in our souls. We can’t hide our unnatural sinfulness and our multitude of weaknesses. In the morass of difficulties of the times in which we live, we, too, are like a barren woman who despairs of ever becoming a mother. 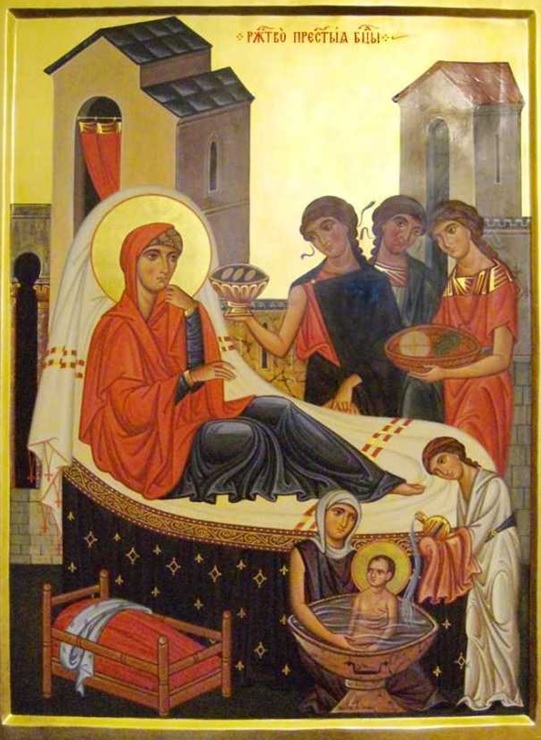 But here we should look at the example of barren Anna and see that ‘what is impossible for people is possible for God’. This is precisely what we find when we investigate the great goodness of Jesus, who has unerringly called us. He is the same Saviour of the world Whom this Maiden drew with her sanctity and forced to descend into this vale of tears, to find His lost sheep, not from afar, through His divine power, but in practice, through our human nature, in which He deigned to clothe himself. He has given us courage and has told us: ‘Do not be afraid, little flock, for your Father has been pleased to give you the kingdom’.

So let no-one lose heart. We have weaknesses. We lack experience. We have a cunning enemy, but we also have a loving Saviour. We, with our barren souls, imagine that we can’t possibly succeed, but we’re armed with the sword of the hope of Him Who said: ‘I will be with you always’ and ‘I will not leave you as orphans’. We learn from experience that with patience, proper faith in Him and endurance, even our barren souls can bear fruit. And not only fruit, but choice fruit at that, just as barren Anna bore one child, but one who is overwhelmingly superior to all other creatures, visible and invisible

Today we’re in this morass, as we’ve described it. We lack real guides and we’ve been left as disorientated orphans. Sheep without a shepherd. Hard words, but true. We feel our orphaned condition as no other generation ever has. It’s not even only that, but that fact that we’ve been disappointed just where we looked for support. So it’s only sensible that we should concern ourselves with this issue, in order to strengthen this blessed hope within us, so that with patience and the consolation of the Scriptures we will have this hope and will be able to continue on our way without let or hindrance.

Within this spiritual morass we often lose our sense of direction, under pressure from our passions and weaknesses, our ignorance and the rabid rage of Satan, who, as the Revelation tells us ‘was enraged at the woman (that is, the Church) and went off to wage war against the rest of her offspring’. And he lets it be understood that, in some way, he has won. Those are the days we’re lining in. We won’t have it that’s he’s defeated us, though. Never let it be said. How can he defeat us, since the choice is still in force? This is a choice not made by an angel, nor by a human being, but by God the Father Himself: ‘No-one comes to Me unless the Father Who sent me draws them’. Notice that. ‘Unless the Father draws them’.