The Nativity of the Mother of God, the Consolation of Humankind

Today we celebrate the Nativity of Our Lady, the Mother of God.
The holy Fathers, despite the natural abilities at their disposal and despite the effects of the Grace which dwelt within their souls, were unable to honour her as she deserved, because this Maiden is shrouded in a great mystery. I shall bring only one aspect to your attention, because I fear that if I try to do more, I’ll do her an injustice. A ray of light that shines on a particular point fills it with light. A ray of Grace acted on the souls of all those individuals who’ve been saved- prophets, apostles, martyrs, saints, confessors or those in general who are justified, are the friends of God, the sanctified- and fulfilled them so that they became inheritors of the promise, entered into the darkness of knowledge, to become gods by Grace. But it wasn’t merely a ray of Grace that acted on this Maiden, but rather the whole of the Godhead which dwelt in her bodily- permanently, not just now and again- and transformed her, together with the perfection of human nature which was part of her character. No creature more perfect has ever been born, or will be, or will be created. The Fathers say that if we set all of God’s creation before Him, visible and invisible, material and immaterial, human and angelic, and Our Lady on the other side, He would choose Our Lady. She’s the most perfect of all God’s creations and can never be surpassed. Apart from the perfection which her most holy soul possessed, she then also inherited deification, because the whole of the Godhead dwelt within her, bodily. And why? To show God’s love for humankind. 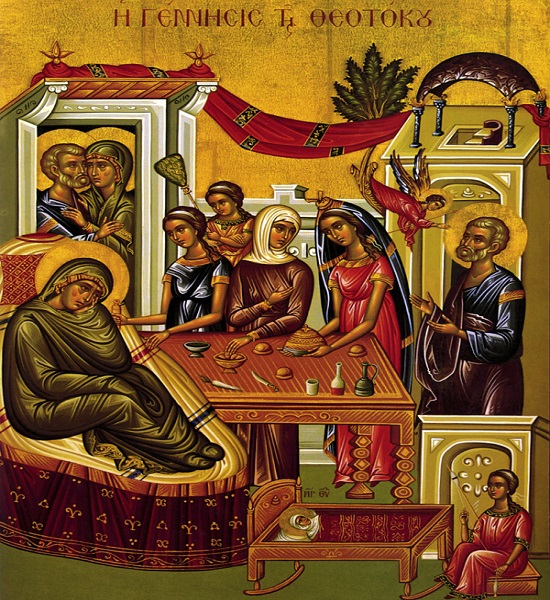 So, like a strong magnet and because of the completion of her personality, this Maiden had the power to attract from His bosom ‘the radiance of the glory of the Father’, and to clothe it with the humility of human nature- apart from sin- so that our fallen race might be saved from the jaws of death and be raised up into the bosom of Our Father, when He Himself can boast, saying: ‘I shall no longer call you servants, for you’re my friends’. And in order to prove this, He turns to His Father and says: ‘Father, where I am, I want them there with me’. Those for whose sake He borrowed their flesh from this Most Pure Maiden.
Apart from that, something was added to the wisdom of all those perfected persons, something that finds a response in every heart: the quintessence of motherhood. What pain can now find no consolation? What sorrowing soul is now under the pressure of despair? The very quintessence of motherhood is now actually part of our nature. Our supernatural God has the quintessence of Fatherhood, but this was beyond our reach, beyond approach, conception, access or contemplation. This Maiden drew upon herself all the tenderness of paternal affection and became the mother of all. At the same time, she also opened unto us the bosom of the Father, which had been closed to us because of the Fall.
I shan’t say any more, because I’m afraid of doing her a disservice. But I’m aware of her maternal affection and so I can cast off my own weakness and clothe myself in courage. I believe that all my weaknesses will be set aside within the bosom of her maternal love. I’ll remind her of the weakness of our nature, which she, of course, didn’t know, because of her own perfection, but which she does now know through the law of affinity, because she’s our mother and feels for her children. Within the bosom of her motherhood, we’ll achieve all our promises. Within the bosom of her motherhood we’ll cast off all our fears and we’ll be assured of success. Because she loosened her embrace of the Divine Word and gave Him up to the Cross, in order for Him to seal our immortality and eternity with His sacrifice, ‘to make the divided one’ and to become our Saviour. Thus He says: ‘Those who believe in me shall never taste death’; and ‘Even if those who believe in me die, they’ll live’. Now she stands between heaven and earth and, with her right hand draws down divine mercy, as is in her power to do. Because she’s not only holy, she’s not just a friend. She’s our mother and has that authority. Her other hand is down here with her other children, who are struggling because of their weakness, who are being overcome, being vanquished. But she also draws up what is below and reconciles it to what’s above. So now who will despair? Who will be at risk? What has questions to ask? Absolutely nobody. But as I said, if I continue, I’ll do her a disservice.