The Woman who Dwelt in a Cave – Part II

She finished her story here and invited to me to eat some of the beans she had in her basket, because she’d been told “from the outside”, that I was very hungry. We ate and drank until I was full. But I saw that both the basket and the pitcher were still full, so I gave glory to God.

When it was time for me to go, I wanted to leave her my outer raso [habit], but she wouldn’t take it and said: “Bring me new clothes when you next come”. 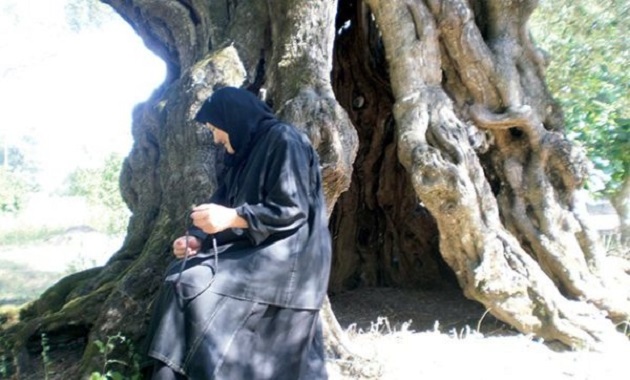 I was filled with joy when she said this and begged her to wait for me and to welcome me again. We prayed again, I bade her farewell and left, imprinting the location on my mind so that I’d be sure to find it next time I came. I left and went to the church in the neighbouring village and told the priest what I’d seen and heard. He gathered the faithful and in a speech he made to them said: “Not far from our church, there are some saintly hermits whose clothes have fallen apart and they’re going about the desert completely naked. Anyone who’s got clothes to spare, bring them here and we’ll hand them out”.

Immediately, the Christians brought in a good many clothes. I took what I needed and, full of joy, started out again, hoping to see once more the blessed face of this spiritual mother, in the cave. I went back to the place, and tired myself out looking, but I couldn’t find the cave. When eventually I did find it, the God-bearing woman wasn’t there any more, and that upset me.

I went away, saddened. A few days later, some hermits came to visit me and two of them said: “We two were wandering around the desert on the other side of the sea when we suddenly saw, at night, sitting on a rock, a hermit with long hair. When we quickened our steps to meet up with him and take his blessing, he avoided us and went into the entrance of a nearby cave. We wanted to go in ourselves, but as we approached the doorway, a voice came from out of the depths of the cave, saying: ‘Servants of God, please don’t disturb me. On the rock next to you there’s a basket of beans and a pitcher of water. If you want, you can eat and drink’.

The voice gave us its blessing and we went to the rock as we’d been told to do. There on the rock were the basket of beans and the jar of water. We ate and drank and rested for the remainder of the night.

When we woke up in the morning we went to get the blessing of the cave-dwelling hermit, but saw that the person had already fallen asleep in the Lord. We wanted to prepare him for burial, but realized that it was a woman, covered with her own very long hair. We blessed ourselves with her holy relics and rolled a large rock across the entrance to the cave. Once we’d prayed, we started out on the road back”.

I then realized that it was the same ‘canonical’ who had lived as a hermit and had become a holy mother. So I told them what I had heard from her mouth and, all together we glorified God, to Whom, indeed, glory is due unto the ages of ages. Amen.