Paper given at a day conference of the Artos Zoïs (Bread of Life) Institute, on the subject 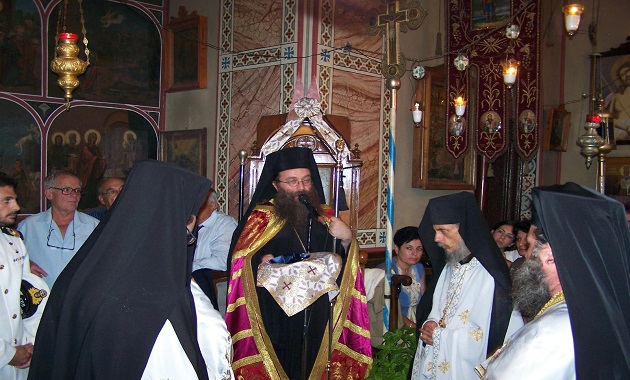 I’m here with you today (and I’d like to thank my friend Stavros Zoumboulakis, the director of the Artos Zoïs Institute, for inviting me), not to deliver a theological treatise on the “much visited” subject of the sermon, but in order to put before you my thoughts, as these have gestated over the 29 years I’ve served in a small parish.

I’m the parish priest at the church of Saint John Chrysostom in the town of Preveza. The parish consists officially of 239 families and, in fact, of as many people who choose it as their parish, irrespective of their place of residence.

I happened to take over a parish on a temporary basis at the age of 24, and as is usually the case, since “nothing’s more permanent than what’s temporary”, I’m still there today, having reached the age of 53. I went with a head of black hair, full of naïve and immature thoughts, and now my hair’s gone white and I’m trying, among other matters, to see precisely the need for a sermon to the few Christians with whom we offer the Eucharist. If you’ll forgive me, I’ll set out and quote what I’ve seen and thought. Bear with me also if I sometimes address you in the first person, but all I have to offer is my own testimony.

A. As a parish priest, the first thing you realize and experience is the fact and the observation that the congregation basically consists of two large groups of parishioners. The first is made up of those who are conscious of the parish relationship and obligations, and who regard the church, the priest and other parishioners as their home, father and siblings respectively. The second consists of those who have a relationship of religious habit, well-established, but not warm, so that they don’t conceive of personal relationships within the milieu of the parish, except in terms of religious duties performed individually.

There is also, officially, a third group of… parishioners. Those who have the sacraments performed in the church as and when a need arises in their lives: marriage, baptism, unction and funeral. But this group, which is the largest, is not with us on Sundays. They don’t hear the sermon, but are a source of stress for the priest, because on the occasional encounters we’ve mentioned above, he has to carry out a dual task. On the one hand, as the “tribal shaman” he has to do his thing which is beyond reason and includes incomprehensible language. But on the other, through the quality of his manner and the quality of his discourse, he should be able to present these “ships that pass in the night” with something to think about: the possibility that, behind the appearances and the ritual, there’s an important issue and a proposal for their lives which indeed concerns them.

a. The first group live in a loving, missionary relationship, sometimes to the point of naivety and exaggeration. Christ’s words: “For the sons of this age are more shrewd than the sons of light” (Luke16, 8) are, unfortunately, fulfilled impressively in the majority of our Christians. His exhortation “Be as shrewd as serpents and innocent as doves” (Matth. 10, 16) has, alas, fallen into disuse. A senseless, baseless attitude of mission makes the discourse of these Christians idle chatter. For many people outside the Church, it’s their acquaintance with Christians that makes it obnoxious for them to contemplate joining.

b. The second group doesn’t demand much and are satisfied with formal religious observance:

They’ll give, but not of themselves.

They’ll come, but not stay after the coffee.

They’ll pray, but won’t feel the plurality of all the prayers in the liturgy and the services.

They’ll give financial assistance, but not personal involvement.

They’ll be polite, but not spontaneously warm.

They’ll attend, but out of habit and social propriety. This is the category who “when they hear the word, receive it with joy. But these have no root; they believe for a while, and in time of testing fall away” (Luke 8, 13).

c. For the third group, everything’s in a state of flux. The only predictable “link” is the sacraments. But how willing are they to come to church and listen to what the priest has to say about the sacrament before the day and time it’s conducted? Alas, because of the conditions in their everyday lives and the poor quality of their relationship with the Church, there’s no such disposition. All they’re prepared to suffer is the procedure of the ritual custom. So they’re officially Christian , but in essence nothing. Or rather, they’re Orthodox atheists.

A priest who communicates, observes, measures and experiences his relationship with these three groups, will very quickly find himself torn as to how he should put together a sermon so that the content will be relevant and useful to everyone. This is a difficult and painful issue.

B. Before we answer, let’s see what the sermon is like in a parish congregation which is always the same.

The most common feeling you have today, if you deliver a sermon, is that you’re talking to people who are unclear as to their beliefs. This is why all the words about Christ, the faith and miracles are turned into a mutual, tacitly suspicious lie. I talk to supposed believers, even though I know full well that this is not actually true in the majority of cases. Priests are often troubled by the thought that their “Christians” will think: “You have to talk like that because it’s your job. And we have to put up with it out of politeness, and not show how bored we are”.

This is a devastating experience. It creates a benumbed psychological attitude in the priest, full of demonic thoughts regarding the pointlessness of his efforts and plunging him into a welter of self-satisfaction over the sacrifices he makes. When he’s wallowing in thoughts like this, he’s neither use nor ornament to anyone.  He preaches without animation and, even if he occasionally says beautiful things, his attitude sends the demonic message that, in the end, nothing changes.

Unfortunately, for centuries now, the way people are received into the Church has been purely formal and without requirements. And so people who are called- and call themselves- Christians are actually more like people simply baptized, who are burdened with pious phobias and a disposition to engage in guaranteed  exchanges with God, rather than Christians with a clear and focused faith, which, even if they’re sinners, allows them to speak “about the hope within us” (I Peter, 3, 15) to anyone who might inquire about it.