St Gregory Palamas  was one of the greatest patristic figures of the Church. In his teaching on the divination of man and his real participation in the uncreated energies of God, he expressed the essence of Orthodox spirituality, in contrast with the secularised theology of his age (14th century), which had taken shape under the influence of the Scholasticism of the Roman Catholic Church. 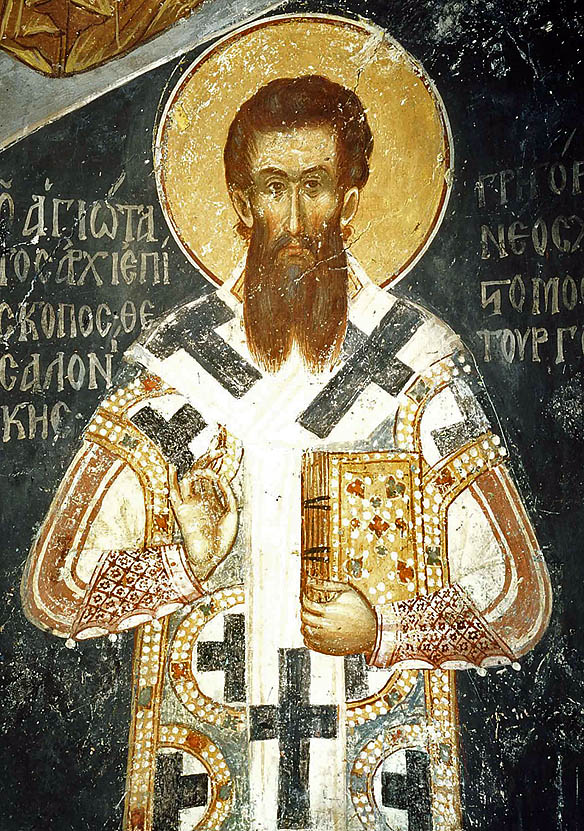 When his father died relatively young, Gregory was seven years old and the Emperor Andronicus II undertook his guardianship, seeing to it that the boy had a brilliant training in philosophy and theology under the famous philosopher and theologian Theodorus Metochites. At the age of about 17, Gregory abandoned his study of philosophy and devoted himself with great zeal to the study of the literature of asceticism. His spiritual guide was the renowned teacher of mental prayer Theoleptus of Philadelphia, who had a profound influence on his thinking.

At the age of 20, having persuded his mother and his two sisters to enter the monastic life, he departed with his two brothers for the Holy Mountain. On the way, they stopped for a while at Mt Papikion, between Macedonia and Thrace, where they met monks from Marseilles, whom Gregory converted, together with their leader, to Orthodoxy. On his arrival on Mount Athos, Gregory chose, instead of the coenobitic life, to live as a hermit near the Vatopaidi Monastery, which at that time was an important centre for Hesychasm, and subjected himself to the famed ascetic Nicodemus, who, as we have seen, lived in a kelli near the Monastery. After the death of Nicodemus, Gregory went to live at the Megiste Lavra, but very soon moved to the Skete of Glossia for greater tranquillity. The Turkish raids of 1325 forced him together with others to leave the Holy Mountain for Thessaloniki, where he was ordained priest. In the following year (1326), together with ten fellow-ascetics, he moved to the Skete of Beroea, where he remained, living a life of great strictness, for five years. Five days of the week he spent in complete isolation, devoted to uninterrupted mental prayer, while on Saturdays and Sundays he emerged to partake of the sacrament of the Holy Eucharist.

When the incursions of the Serbs in 1331 forced the hermit monks to leave Beroea, Gregory took refuge once more on the Holy Mountain, settling at the Hesychasterion* of St Sabbas, until he was elected Abbot of the Esphigmenou Monastery (1335). There, however, his great strictness was resented by the monks, and he returned to his hesychasterion. It was there, at Pentecost of 1337, that he read the theological treatises of Barlaam of Calabria and subjected their erroneous views on the procession of the Holy Spirit to severe criticism.

The theological dispute between Barlaam and Palamas took on greater dimensions because of the accusations of Barlaam against the Hesychasts, whom, because of the psychsomatic technique which they used in the practice of mental prayer, he called ‘omphalopsychoi’ – those with their souls in their navels. The defence of the Hesychasts was undertaken by Palamas in his works In Defence of those Practising Hesychasm in Sanctity, in which he put forward in a creative manner the Orthodox teaching on the divination of man and real vision of the divine light, on the basis of the traditional distinction between the essence and the energies of God. A council which met in Constantinople in June 1341 condemned the views of Barlaam, who, disillusioned, joined the Latins, though leaving behind him supporters of his views. One of these was Gregory Acindynus, who was condemned by another council in August 1341.

Two months later civil war broke out (1341-1347), in which the theological conflict between Palamas and Acindynus also became involved. This resulted in the imprisonment of Gregory Palamas (1342-1346), as being ecclesiastically and politically dangerous. When in 1346 the political scene altered with the victory of John Cantacuzenus and the Hesychast Isidorus ascended the patriarchal throne, Palamas was elected Metropolitan of Thessaloniki. He was unable, however, to go to his see immediately because of the five-year ascendancy there of the Zealots, who were opposed to the political state of affairs prevailing in the Empire. Only when Cantacuzenus took Thessaloniki was Palamas able to enter the city in triumph and to take up his pastoral duties, labouring untiringly in making peace and for the unity of the people of his diocese. These pastoral tasks were, however, interrupted by the recrudescence of the Hesychasm controversy. This time it was the man-of-letters Nicephorus Gregoras who, in the name of the Renaissance ideas of the West, presented himself as the opponent of Gregory Palamas. After the failure of the attempts of Ioannes Cantacuzenus to achieve reconciliation, two councils were convened in 1351 which condemned Gregoras and his followers. The ‘Tome’ which was compiled by the second of these councils was signed by Cantacuzenus and was finally accepted by the Church as an official expression of its teaching on the subject of Hesychasm.

On his way to Constantinople to bring about a reconciliation between Cantacuzenus and John V Palaeologus, he was arrested at Callipolis by the Turks in March of 1354. He was taken to various cities in Asia Minor, in some of which he had interesting theological discussions with the Turks and the heretical Chiones. His release was obtained in spring 1355 by the payment of heavy ransoms and he returned to Constantinople, where he conducted a public theological debate with Gregoras, which provided him with the occasion of writing his works entitled To Gregoras. 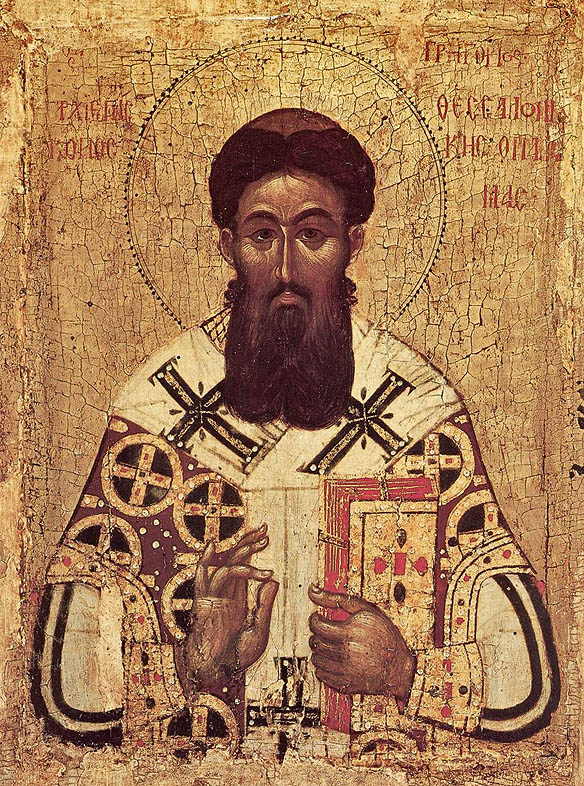 In summer 1355 he returned to Thessaloniki, where he continued, untroubled, his pastoral work until his death on 14 November 1359. Before ten years had passed, Patriarch Callistus in 1368, by an act of the Synod, declared Palamas a saint of the Church and laid down that his memory should be celebrated on the Second Sunday in Lent. An encomium and an order of service in his honour were written by his pupil and the successor of Callistus on the patriarchal throne, Philotheus Coccinus.