Religion / Liturgy
Ioannis Foundoulis Professor of the Theological School A. U. Th. †

But already, in the Apostolic Constitutions (VIII, 41), there were special prayers and petitions by a deacon “for our brethren who have reposed in Christ” and which basically have the same content, and sometimes phraseology familiar to us from the prayers now in use (“forgive him/her every sin, witting and unwitting… place in the land of the righteous, … remaining in the bosom of Abraham, Isaac and Jacob… from which all pain, sorrow and sighing have fled”. There is also evidence that memorials were established, by the apostles, to be held on the third, ninth and fortieth days as well as on the annual anniversary of the date of death. 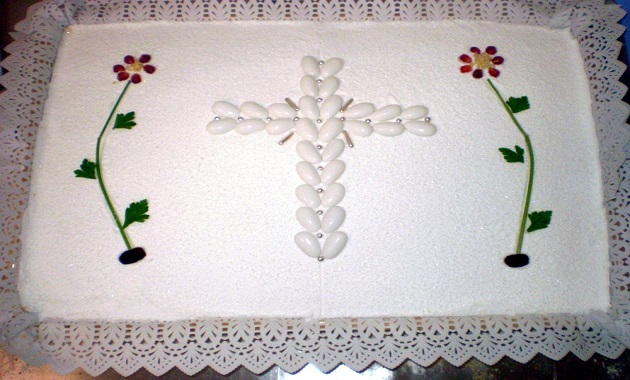 A Biblical or elementary theological interpretation is given for each: “Let prayers and readings be said for the departed on the third day, for Him Who rose on the third day; on the ninth, in remembrance of those present and the departed; on the fortieth, because, in the old manner, the people mourned Moses thus; and annually, in remembrance of them” (VIII, 42). Many similar theological interpretations deriving from the Old Testament or from the theological significance of the numbers  or, particularly, from the post-Resurrection appearances of the Lord, are used in order to justify the choice of days for holding memorial services: the Holy Trinity, the three days of the Lord in the grave (the third day); angelic ranks, or the sacred number 3X3, or the appearance of the Lord on the eighth day after His resurrection (ninth), the Ascension of the Lord (fortieth) and so on. Saint Symeon of Thessaloniki mentions other interpretations, which were in circulation in his time, which linked the days for memorial services to the corresponding phases in the conception and development of the embryo on the one hand, and of the natural decomposition of the body after burial on the other. These were based on the medical knowledge of the day and Symeon does not adopt them, correctly preferring “to understand everything spiritually and in accordance with God and not to interpret things of the Church through the senses” (Dialogue, chap. 371). One thing is clear: that the Church retained certain pre-Christian customs which did not contradict its teachings, gave them Christian significance and altered some of them for theological reasons. This is how it acted when it transposed the memorial from the thirtieth to the fortieth day, obviously under Jewish influence and by correlation with the Lord’s ascension. So also, it celebrates the annual anniversary not on the irrelevant day of the natural birth of a person, but on that of their birth and perfection in Christ and their entry into the true life, that is, the day of the “falling-asleep” of the believer and his or her new birthday. It does not engage in pointless polemics or shadow-boxing, but re-makes the world, in Christ. A very wise tactic.

From the extant Rules of various monasteries we learn the funeral customs that were observed in the monasteries and, in all likelihood, in the churches “in the world”. For the first forty days, a special supplication was made at Vespers and Matins on behalf of the departed and the bloodless sacrifice was performed on his or her behalf. From the time of Saint Cyril of Jerusalem (4th century), who emphasizes that “great benefit” is afforded to the souls “on behalf of whom the supplication is offered of the holy and most dread sacrifice (Mystagogical Catechesis V, 9), until that of Symeon of Thessaloniki (15th century), the Fathers mention the especially great importance of the celebration of the Divine Eucharist on behalf of the departed, the commemoration of them during it and the benefit they derive from it. Saint Symeon links it to traditional liturgical theology, especially the benefit of the commemoration of the departed at the extraction of the portions of bread at the preparation table, because in this way, through their portion on the paten, they partake mystically and invisibly in the grace; they commune, are comforted, saved and rejoice in Christ (Dialogue chap. 373). If someone died during the period of Lent, or if the time of the forty liturgies coincided in part with it, an easy readjustment was made. The third day was held on the first Saturday, the ninth on the second and the forty liturgies began on the Monday after Thomas Sunday. The main point is that the memorial service for the departed is indissolubly linked to the celebration of the Divine Eucharist, as was the case with baptisms, weddings, anointing and so forth, in earlier times.

Apart from the individual memorial services which took place on the third, ninth and fortieth days after death and on the annual anniversary, the Church  has also introduced prayers at all services for the repose of the souls and blessed memory of our departed ancestors and relatives. These are general intercessions and prayers which can be particularized by the commemoration of specific names. Thus, we have the great litany at Vespers, Matins and in the Liturgy (“Have mercy upon us, Lord… Again we pray for the blessed memory and eternal repose of the souls…”); the service of preparation for the liturgy; diptychs in the liturgy after the consecration; “Let us pray…” at the Midnight Office and Compline; the tropario for the dead at the Third and Sixth Hours, and particularly the second part of the Midnight Office, which is called, in the sources, a “thrice-holy on behalf of the dead” and contains two psalms (120 and 133), a thrice-holy and so forth, three funereal troparia (“Remember Lord, as you are good”… and so forth), a hymn to the Mother of God as well as the funereal prayer (“Remember Lord, those who in hope of the Resurrection…”).

Every Saturday in the year is dedicated to the departed and to prayers on their behalf. On these days, hymns are sung for the departed and there is a canon in the tone of the week, as well as memorial services. Exceptionally, two Saturdays a year,  the Saturday before Meat-Fare Sunday and that before Pentecost, are days of common, universal commemoration, since on these days “we celebrate the memory of all Orthodox Christians throughout the ages who have fallen asleep in the Lord”. The choice of Saturday as the funereal date is due, on the one hand, to the fact that in Genesis it is called the day “of rest” from His work for God, the Creator of the world (2, 2), and also because the Lord spent the Saturday of Passion Week in the tomb. There were similar feasts for the dead in pre-Christian times which were replaced by common memorial services and the two Saturdays of the Souls. On the Saturday before Meat-Fare Sunday, between odes six and seven of the Matins canon, there is a wonderful reading by Nikiforos Kallistos Xanthopoulos, in which he analyzes the  teaching of the Church regarding life after death and where matters concerning memorial services are set out in detail, and their benefit to the souls of the departed explained.