The depiction of Saint Nicholas and the related traditions

Saint Nikolaos died on 6th December 330 A.D. After his assumption he was renounced “Myrrh” as his relics started gushing myrrh. His memory is celebrated on 6th December by both the Orthodox and the Romeo Catholic Church.

It is also very important that St Nikolaos was gifted with the charisma of miracle- working, and he saved a lot of people during his life and after death. Some of his numerous miracles are the following ones;

• First of all he saved the city of Myra, by miraculously appearing in front of a ship’s captain, making him to bring the wheat his ship was caring to the inhabitants of the hungry city.
• He appeared in the dream of emperor Konstantinos and revealed to him that three officers charged with conspiracy were not guilty.
• He saved many ships in danger of sinking in the turbulent sea.
• It is also reported that once a passenger fell into the turbulent sea from his ship, he said “Saint Nikolaos, help me!” and the Saint miraculously transferred him to his house. (http://www.matia.gr).

Saint Nikolaos is exceptionally honored by every Christian, and this universality is obvious by the huge number of religious art works that have been created to honor his life. In West (12th century) Saint Nikolaos’ life was the inspiration for the most ancient theatrical play ever written in the French language (Jean Bodel d’ Arras, 1958, pg. 78). In the East, Saint Nikolaos is also honored in the people’s traditions, as the texts that have been written concerning his life are abundant; biographies, eulogies etc. (Gustav A., 1913-17). Furthermore there is a huge number of representations of Saint Nikolaos in eastern orthodox painting, in both frescos and in portable icons. More specifically, the first picture is bi- sided. In the main side, Saint Nikolaos is depicted with many representations from his life, while at the spine of the picture one can see depictions of the Saint’s Assumption. In the middle representation the Saint is depicted integral, standing, frontal. His right hand is blessing and his left hand is holding the Gospel, closed.

Generally, Saint Nikolaos is depicted in many representations. Some of them highlight his face, some others depict one of his miracles. Saint Nikolaos has the looks of an elderly priest, slender, pale, severe, medium height. As it has already been mentioned, in the holy icons he is depicted holding a closed book, the Gospel. His episcopal vestments are a deep blue color, while the stole, the cuffs and the epigonation are sienna color, decorated in white pearls. Last but not least, his halo represents his saintliness regarding God, the Church and the people.

Saint Nikolaos is one of the most beloved saints among our marine people, renowned for his miracles that are connected to the sea. In fact, in most greek houses there is always a holy icon of Saint Nikolaos next to the icons of Jesus Christ and Virgin Mary. This saint is considered to be the protector of the seamen, of the Greek Navy and the Coast Guard. This is easily detectable, since all navy ships and all merchantmen are always carrying a holy icon that depicts this saint. On top of all these, many people have experienced one of his numerous miracles. More precisely, there are many stories experienced by sailors, fishermen, and captains that travel in endless oceans, as well as exceptional stories of our Navy, whose Saint Nikolaos is a holy protector. One of his miracles is his intervention during the last war, on Christmas Eve 1940, when Submarine “Papanikolis” managed to enter the Otranto’s narrow place, where the Saint’s remains rested. More precisely, while the crew of the submarine were sailing against an Italian enemy ship, in the vessel, three little coins miraculously stuck on Saint Nikolaos’ icon. This was a reply to the crew’s prayers and agony to whether or not they would finally survive. In the end, “Papanikolis” managed to sink an Italian cargo- ship, while remaining intact from the Italian destroyers. (http://el.wikipedia.org).

In West, the celebration of Saint Nikolaos, whom they call “Santa Claus” is connected to Christmas and exchange of gifts, because of Saint Nikolaos’ trademark generosity. In Greece, however, Saint Vasilios is matching to Santa Claus. This symbolism actually refers to Saint Nikolaos and entails many pagan, pre- christian beliefs about “Father of snow”. In Greece, this transformation was imported during the decade of 1950-1960, and it mainly concerned the civil population, who used to send wish cards depicting the “western” Santa Claus. 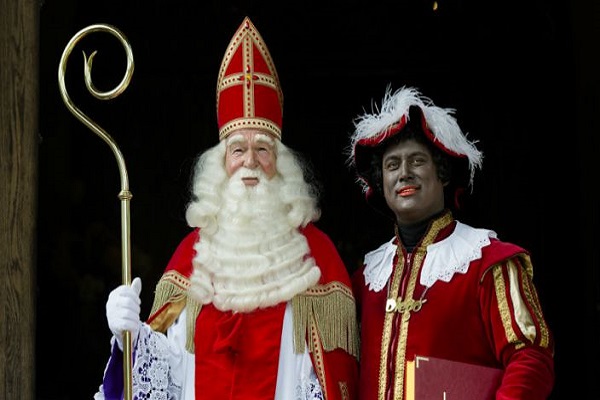 Every year, Christmas time in Holland begins with a tradition which at first had nothing to do with Christmas celebrations. The peak day of this celebration period is the day that Dutch people honor Saint Nikolaos. According to the legend, Saint Nikolaos, whom they call “Sinter Klaas” arrives in Holland every November, three months before his birthday. His ship is full of gifts, and he is welcomed in the port by Queen Beatrix followed by lots of people. During the next days, Sinter Klaas wanders all over the country with his helper, Zwarten Piet (Black Pitt). He gives presents to the children of Holland on 5th December, and Christmas trees are decorated everywhere, after Sinter Klaas is already far from the country. (http://www.noiazomai.net/santaclausthetruth.pdf).