My neighbour, my saviour

One of the greatest problems of Orthodox spirituality in recent years has been the distortion of Orthodox eschatology, that is the prophetic discourse concerning the last times. It’s common for people with no experience spiritually, without any real awareness of what Orthodoxy means or of its magnificent essence, to concern themselves with whatever’s been recorded as the word of the Lord, either as the word of an Apostle or Saint, regarding the last times of the world. They do this hurriedly and without the necessary spiritual background. 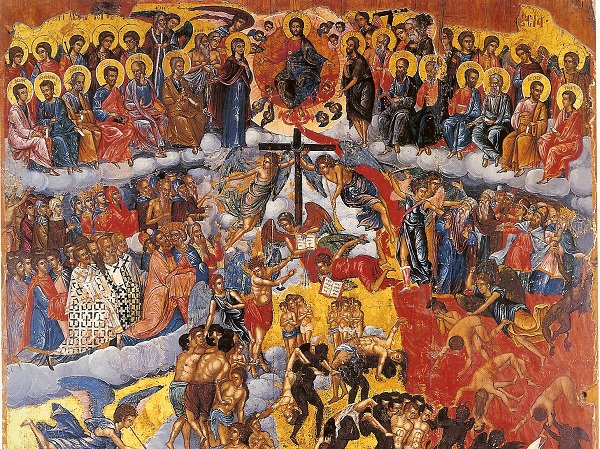 In fact, the main characteristic of most of them is that, without ever having studied the Gospels, the Acts of the Apostles, the Epistles of Saint Paul and the other Apostles, that is, without having dealt even in passing with the basic texts of Christianity, they latch on to the Revelation of Saint John, claiming the right to analyse and interpret a book ‘sealed with seven seals’, which one of the greatest interpreters of Scripture, Saint Basil the Great, confessed to being utterly incapable of analysing.

Because the images described in the Revelation of Saint John, and the eschatological texts of the Church in general, are vivid and detailed, they can give rise to fear and excite the imagination, especially when they’re recycled without proper caution. This contravenes the fact that the Church doesn’t use fear as a pastoral tool, nor does it wish people to walk towards God in fear and create a forced relationship with Him.

Beyond that, the reason why we’ve been given these texts is overlooked. They’re a warning that many terrible events will occur in human history, within the context of a frenzied war against the Orthodox Church and the true faith. In the end, however, Christ, as the true King, will conquer, and those who’ve remained faithful to Him will reign with Him for all eternity.

The judgment
Today’s Gospel reading presents the Lord’s authentic message to us regarding the last times. Why do we read this text today? Because a lot of other passages have already been read, chief among them being those of the last two Sundays, the Publican and the Pharisee and the Prodigal Son, both of which demonstrate clearly God’s love, and this might lead us to overlook the factor of God’s justice. And so there’s a description of the way in which God will judge us. This is so that we’ll be aware of the fact that nobody will escape trial and also so that we’ll think profitably about the one event that causes unease, not anxiety, in the soul of all God’s people: how shall we stand before the dread judgement seat and make a ‘good defence’?

The wound and the cure
Why is there no mention of sin? Let us recall how the transgression of our ancestors was committed and how sin and death entered the world. The wicked serpent took Eve aside and seduced her with its talk. Instead of calling Adam, so that the human race could face the challenge of temptation together, she continued the dialogue on her own, with the result that the human view of the good God was altered, as was the reasoning behind His law. The beginning of sin was this fracturing of the unity between Adam and Eve, the connection between man and woman, their loving dependence on each other. The natural consequence and development of the sin was when Eve, again on her own, ignoring Adam and his right to be consulted, didn’t only eat of the fruit of the tree of the knowledge of good and evil, but then went to Adam and persuaded him to submit, as well. She gave him the fruit and told him ‘Eat’. Before they sinned against God, our ancestors had already sinned against each other. Before the offence against God was committed, there was the offence against the human person.

It’s this dimension of sin that today’s Gospel reading comes to remedy, even though there’s no mention of sin at all. It reverses the procedure of the fall and prioritizes our proper approach to other people as the first-fruits and confirmation of our progress towards God the Father. If you maintain a distance between people, you can’t claim to be united with God. On the other hand, those who deal lovingly with other people, cover the distance that separates them from God. This is why the disciple of love writes: ‘Those who say, “I love God”, and hate their brother or sister are liars; for those who do not love a brother or sister whom they have seen, cannot love God whom they have not seen’ (I Jn. 4, 20). This is the way we should approach the last days: our love towards our neighbour as a measure of our love towards God.