Witnessing History: The Holy and Great Council of the Orthodox Church (Book Excerpt)

The Orthodox Church will celebrate the Sunday of Orthodoxy tomorrow and commemorate the restoration of the holy icons as decreed by the Fathers of the Seventh Ecumenical Council in 787.

In 2014, a Synaxis of Primates convened and chaired by His All-Holiness Ecumenical Patriarch Bartholomew at the Phanar during the first week of Great Lent concluded on the Sunday of Orthodoxy. It was then that a final unanimous decision was taken by the heads of the autocephalous Orthodox churches to convene a Holy and Great Council in 2016 (and reaffirmed by all local churches in January last year).

Following the 2014 Synaxis, I wrote an article, “The Sunday of Orthodoxy at the Great Church of Christ,” in which I described the historic event planned for two years hence.

Last year, by the Grace of God I had the remarkable and humbling opportunity to be in Crete for the Holy and Great Council. I have written a diary-formatted book chronicling the extraordinary events I experienced and wonderful people I met. Below is an excerpt from the Saturday, June 18th entry of Witnessing History: The Holy and Great Council of the Orthodox Church. 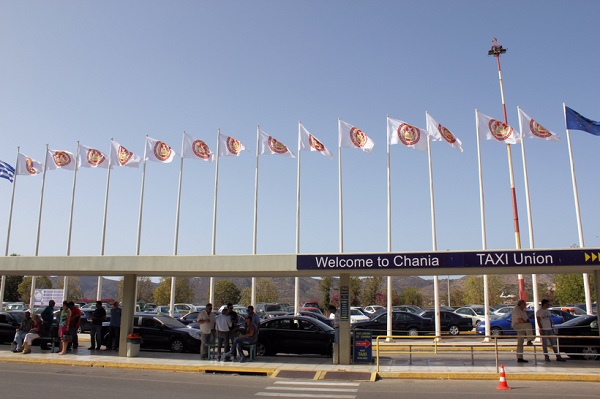 Landing in Chania, Crete’s second largest city, we walked onto the hot tarmac of its international airport where just a few days before the participating primates, led by His All-Holiness Ecumenical Patriarch Bartholomew, were welcomed like visiting heads of state, greeted by local and national dignitaries, as well as by members of the military. As we exited the airport doors with our luggage in tow, we stood in front of fourteen flag poles, one for each autocephalous church, flying pristine white flags with the Holy and Great Council’s red and gold logo in the middle of each; they were bookended by the Greek and European Union flags. As we made our way to the Holy Patriarchal and Stavropegial Monastery of Chrysopigi in Chania, our home base during our stay in Crete, something wonderful was in the air. Hundreds of bishops from around the world had gathered on the island; the heart of Orthodoxy was beating in Crete.[1] Arriving at the historic Monastery and seeing the Mother Superior, Abbess Theoxeni, was rejuvenating after a trans-Atlantic flight.

Following the commandeering of the Monastery by occupying German forces during the Second World War, Chrysopigi was transformed into a coenobitic community of sisters in 1976. Led at the outset by Abbess Theosemni of blessed memory (+2000) and continued today by Abbess Theoxeni, the Monastery with its approximately fifty sisters has cultivated an environment of love, hospitality, and self-sacrifice rooted in Church tradition and the centuries-long history of asceticism. It is a jewel of contemporary Orthodoxy and was selected to host a luncheon for primates and delegates of the Holy and Great Council following the Divine Liturgy for the Sunday of All Saints. Moreover, His All-Holiness chose Abbess Theoxeni to be a member of the Ecumenical Patriarchate’s official delegation to the Council – perhaps the first time in Church history a female was selected to participate in such a pan-Orthodox event.[2] 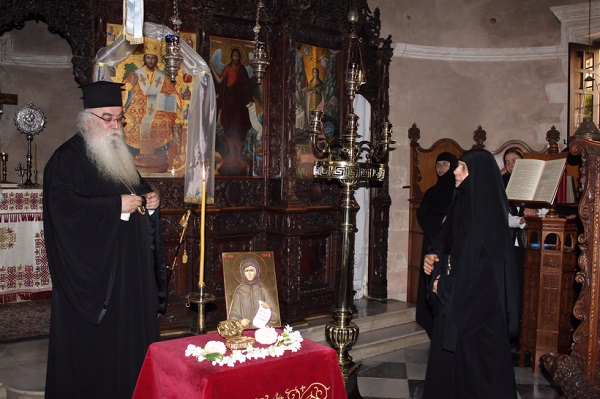 After freshening up, we made our way to the Katholikon, which is dedicated to our Lady of the Life-Giving Spring, for Vespers. Metropolitan Seraphim of Kastoria presided; he brought with him the holy relics of St. Sophia of Kleisoura as a gift for the Monastery, which the faithful venerated. Following the service, His Eminence said a few words about the life of the Saint, highlighting both her patience in this world and the benefit to each of us from practicing silence (Κλειδί στο στόμα, was the exact phrase he used in Greek to quote the Saint). The Abbess then escorted the Metropolitan and many of the pilgrims into the refectory for an offering; it was there where the discussion briefly touched on the imminent opening of the Council. His Eminence had a very warm and welcoming personality with a humble disposition that would serve him well as a member of the Church of Greece’s delegation. His comments at Chrysopigi were general in nature, stressing the need for respectful dialogue within borders and the inappropriateness of the lies and unfounded accusations that were swirling around the Council and especially against the person of His All-Holiness. One comment especially stood out to me, however, when His Eminence discussed that the faithful should have trust in the hierarchs: “We’re not traitors of the faith,” he said. This line was never too far from my thoughts in Crete and as I observed the Holy and Great Council’s deliberations, I witnessed firsthand the deep faithfulness and reverence bishops have for holy Orthodoxy.

As the sun was setting, we joined two of the Sisters on a short trip to the celebrating Monastery of the Holy Trinity on the Akrotiri peninsula in Chania. There was a buzz in the air as we entered the Monastery, which was filled with both local residents and international visitors. As we lit our candles and venerated the icons, Great Vespers was just concluding and we heard the customary “Through the Prayers…” which ends all Orthodox services. Bishops and priests from a number of autocephalous churches were present and the whole atmosphere seemed like one big family get-together, which in many ways it was since we are all one in Christ Jesus (cf. Gal 3:28). This feeling of oneness, connected by and through Christ, was just beginning; the heart of Orthodoxy was beating in Crete indeed, and the beat would grow stronger the following day as the primates concelebrated the Divine Liturgy for Holy Pentecost.

[1] Credit for this apt description belongs to Metropolitan Elpidophoros of Bursa who on June 23th Tweeted: “Ἡ καρδιὰ τῆς Ὀρθοδοξίας χτυπᾶ στὴν Κρήτη !”
[2] The maximum number of hierarchs designated by each autocephalous church as members of the Council was 25. Six “Special Consultants” – clergy, monastics or laypeople – from each church also attended but without the right to speak or to vote. I believe there were only half-a-dozen women consultants in Crete, including the Abbess, distinguished professor Dr. Elizabeth Prodromou (Ecumenical Patriarchate), as well as two women from the Church of Albania.