The Theology of Gender – 13. St. Basil’s pastoral care for the integrity of marriage 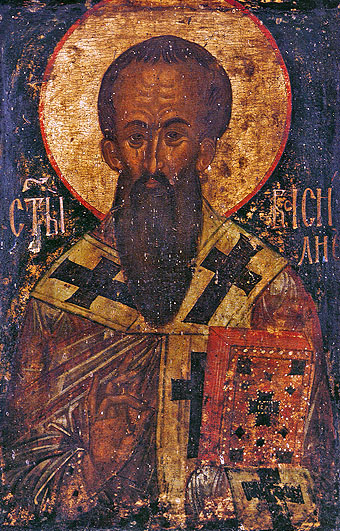 Since physical abuse of women and children was not a rare phenomenon for that era, when St. Basil disqualifies “abuse” as a cause for divorce, he does not refer to women subjected to severe violence.  The Church Fathers did not ignore that reality is sometimes hard and far from ideal. The ideal situation is always stressed as the goal for all Christians. However, taking into consideration the real situation, the canons foresee cases in which a marriage is not only destroyed in its essence, but continued cohabitation might be dangerous to one of the spouses’ life. Canon 35 of St. Basil[1] offers the possibility that the woman may leave her husband for a reasonable cause. This canon was combined with two other canons of St. Basil and formed Canon 88 of the sixth Ecumenical Council. St. Nikodemos the Hagiorite, in his commentary on this Canon, accepts the possibility of a woman to leave her husband in case of adultery.[2] Moreover, Justinian’s legislation[3] orders that the woman has the right to divorce her husband in the case where he threatens her life or offends the honor of their marriage by living with another woman, ignoring the warnings of the wife and other people.[4] It is clear in this law, which was also accepted by the Church, that the infidelity of the husband is considered to be a serious reason for divorce only when it is repeated and severe.

Moving beyond the practical aspects of the issues addressed by the canons of St. Basil, one may discern that his main concern is the spirituality of Christians and in keeping the holiness of matrimony. Thus, his initial effort is to limit any laxity in the causes for divorce, since this would give the opportunity to those with lose faith and principles to indulge their passions. Second, in the cases that the salvation of the marriage is hopeless, he tries to set limits to further corruption, again for the same reasons. In accordance to this spirit and outside any legality, St. Basil advises those whose marriage is broken to stay away from other relationships.[5] St. Nikodemos also mentions that canon 113 of Carthage orders that if a woman who leaves her husband stays single, the husband is not allowed to marry another woman either. By encouraging both parties to remain single, the Father foresees the possibility that they may get back together and resume their marriage.[6]

St. Basil’s pastoral care is for the protection of the integrity of marriage which ideally is performed once in a lifetime. Therefore, he discourages everyone from engaging in affairs with women divorced by their husband, giving the opportunity for the couple to resume their relationship.[7] Obviously in this passage St. Basil does not agree with the spirit of the Old Testament commandment[8], which he invokes in canon 9, that the husband should not accept the adulterous wife back. The same law from the Old Testament was still in effect during the early Roman period and forbade the husband to live with his adulteress wife because he would be condemned as a procurer.[9] From the above, it is evident that St. Basil is not interested in the punishment of the sinner, but his care is the restoration of the person to the spiritual life. This attitude is manifested also in his canon 34, where the adulteress who shows repentance does not need to be punished according to her transgression since she is already on the way to restoration through repentance.

The protection of the sacrament of marriage is also the principle behind the canon 31 of St. Basil that was included in canon 93 of the Council in Trullo[10] dealing with the remarriage of a woman whose husband has been away for a long time and there is no indication whether he is dead or alive. The canon orders that if the woman marries another man and the first husband comes back, she has to leave the second marriage and return to the first husband, if he still wants her back. To modern women this sounds oppressive, but it is based on the premise that if the first marriage is still in effect, the second is invalid. According to commentators, the woman is accountable if she enters a marriage without first ascertaining the death of her first husband.[11] Therefore, St. Basil and the rest of the Fathers of the synod aim at keeping asceticism as the main principle in Christianity and promoting the restraint of passions that otherwise direct people to finding easy ways out of life’s difficulties.