One should not approach the canons of the Church in the same way as the civil laws since neither are the canons mere legal statements nor does the Church’s legislation serve the principles of penal systems. The purpose of all penal systems is to regulate the social relationships in a way that the rights of one person will not devastate the rights of others. The civil legislator tries to balance the interests of the people in a world full of necessities and self-interest. The canons of the Church, however, aim at helping Christians to liberate themselves from material necessities and eventually become the image of Christ on earth, for the benefit of others.

Secular law systems have as their central reference an ideal model of the human person, which in western civilization was put forth by Jean Jacques Rousseau[1] in his description of the “natural man”.[2] The conception of this model was influenced by the teachings of Thomas Aquinas, who proclaimed that humans have knowledge of law through their intellect, which was not affected by the original sin.[3] Contrary to this, canon law understands humanity based on the ideal model offered by the person of Jesus Christ. Since Christ offers the perfect image of the whole humanity, Orthodox canon law adopted the definition of His person found in the Christological dogmas of the Holy Synods, as the basis for its anthropological model.[4] 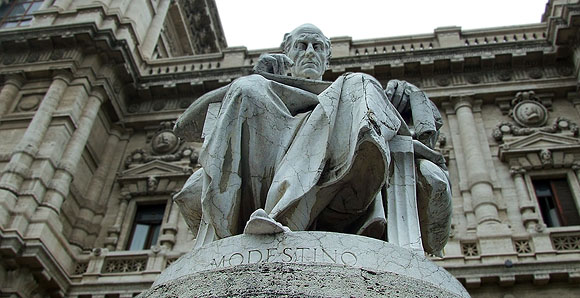 However, on the issue of marriage the boundaries between civil and canon law were not clear during the Byzantine era[5] because of the peculiar nature of the institution of marriage. The definition of marriage that prevailed in Byzantine and ecclesiastical law was adopted from Roman law in the form that was put forth by the Roman teacher of law, Modestinus: “Marriage is a union of man and woman, a consortium for an entire lifetime, and a sharing of divine and human law”[6]. From this definition the inseparable existence of civil and canon law in the essence of matrimonial union becomes obvious.

The same definition is accepted by St. Nikodemos in the Rudder[7] contrary to the views of Clement of Alexandria and Justin the Martyr, who believed procreation to be the purpose of marriage.[8] According to Modestinus, the union of man and woman, which is a mystery[9], is meant to be a unique, one time performed, and lifelong union in all aspects of life. Nevertheless, in the time of Modestinus nothing was easier than getting a divorce.

In the Scriptures there are many references pertaining to the indissolubility of marriage, recognizing only adultery as a reasonable cause for its termination.[10] Divorce was a challenging reality even in Judaic society, but according to Christ the law given to Moses permitting divorce was a divine indulgence to human weakness.[11] This is a unique testimony from Christ, the law-giver par excellence, that there may be laws contrary to the divine will, yet instituted due to the limitations of human nature. In the same spirit, St. Basil, in the beginning of his ninth canon expresses the apparent contradiction between the reality of the Church, which is limited because of human inadequacy, and divine law.