The Theology of Gender – 7. The Place of Women in Byzantine Society

Byzantine society was a dynamic union of different cultural elements based on Greek civilization and the Christian faith. Although Christianity was the decisive element in the formation of Byzantium, the practical application of the Christian ethos as a way of life met with the resistance of the old cultural principles that were deeply rooted in the consciousness of the people. Accordingly, the theology of gender as expressed before faced two opposing extremes: the chauvinism of the Roman civilization, which pushed women into the background, on the one hand, and the pagan liberality that was a danger for the social ethos, on the other. 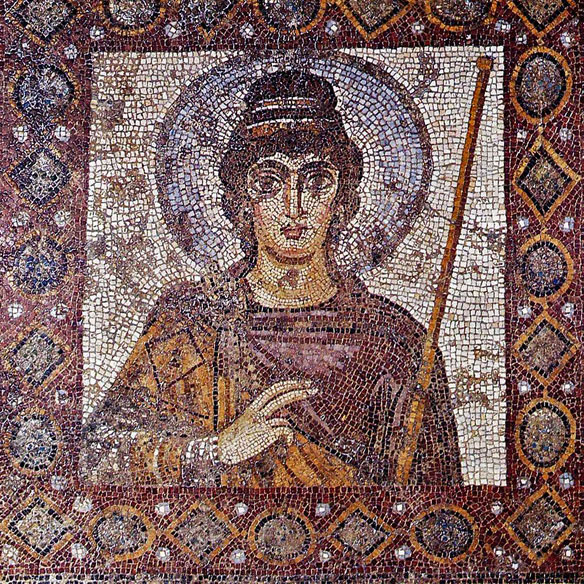 For this society, it is reasonable to say that “the ancient’s interest was order and peace, not blindly equal treatment of man and woman”[1]. The place of woman in the pagan world was reduced to running the household, and bringing up children. Women were always under the rule of their fathers, or their husbands after their marriage.

In Byzantium, girls usually did not attend schools, but from the age of six or seven were taught at home by their parents or tutors. Their education was generally limited to learning to read and write, memorizing the Psalms, and studying the Scriptures. Unmarried young girls spent most of their time in the seclusion of their home, protected from the eyes of foreign men and from threats to their virginity.

Early marriage and procreation were the norm in Byzantium. Marriages were arranged by the parents, for whom the principal considerations were family connections and economic arrangements. Normally, girls accepted the husband selected by their families, although there was occasional resistance, because of the desire of the girl to enter the monastic life or objection to her parent’s choice. Because of women’s inability to choose their husband, the legislators had to deal with a peculiar crime: the abduction of women. Many times the transgression took place with the cooperation of the woman, who in this way imposed her choice on her parents. Yet marriages without parental approval were annulled and became legal only after the parents gave their consent. However, any children born before the marriage was declared valid were considered illegitimate.[2]

The ancient ethos did not allow any margin for sexual relationships before marriage. The civil law ordered the annulment of marriage if the woman was not found virgin by the husband.[3] The rape of a virgin, or even an adulterous affair with one, was punished heavily by civil legislation, but only if the woman was a free citizen. The guilty man faced property penalties, exile, or torture, depending on his social class. The woman was not punished, even if she consented to the act, unless she had been dedicated to the Church or was engaged to another man. The legislator was not interested in the compensation of the woman and did not force the couple to marry, unless both parties and their parents agreed. The fine imposed was only required so as to help the girl marry, although this was almost impossible.[4] On the other hand, the Church’s canons insisted on the marriage of the two individuals since no-one would marry a woman who had lost her virginity; for the same reason, it did not allow the perpetrator to marry another woman.[5] Furthermore, for the woman who consented, the Church canons ordered the same punishment as for the man, which was the penalty exacted for fornication.[6]

In the Roman world women were not equal citizens with men and could not have personal freedom or the right to have a choice. They were under the rule of their father, who was the head of the family. Until the last era of the Roman Empire, women, even after they were married, were under their father’s authority, as fathers even had the right to dissolve their daughter’s marriage.[7] Many women achieved power and status in their middle age after the death of their husband.[8] Widows were no longer viewed as sexual temptresses, and so were treated with respect and trust. Numerous widows achieved financial security by getting total control over their dowries; the most generous Byzantine patronesses were in fact widows who founded churches, monasteries, or commissioned works of art.

Although married women, like their nubile daughters, spent most of their time at home, there were numerous opportunities for them to venture outside. They could go to the public baths or to church for services. They could visit shrines, venerate relics, consult a holy man, or attend religious processions, weddings or funerals. Many women, although excluded for the most part from participation in politics, became passionately involved in the religious controversies of the day, as for example in the iconoclastic controversy.

Even so, respectable women were very careful regarding their public appearances. They avoided the mixed public baths, where many sexual offences were committed, and stayed away from theaters and shows known for their lax morals.[9] A husband even had the right to divorce his wife if she visited those places against his will.[10]

The limited freedom and power of females in the Roman world drove women to become creative in circumventing restrictions, which gave rise to types of crimes. Women resorted, for example, to magic potions and spells to attract the man they wanted, often causing his death. These practices, met with the sharp condemnation of the Canon Law and the sentences for both perpetrators and accomplices were very heavy. St. Basil considers this transgression as premeditated murder, although the man’s death was not intentional.[11]

Women played an indispensable role in the perpetuation of the family line and in the transmission of property from one generation to the next, since the family was the key unit of Byzantine society. This principle determined the way the legislator dealt with transgressions of women. Although Roman law did not consider abortion a crime, since the embryo was considered as part of the woman’s body, it did so in the event the abortion had not been approved by the husband. Abortion, therefore, was not a crime against a life but against the man’s right to have an heir or successor.[12] Thus, civil law gave the husband the right to divorce his wife on account of infertility, something that the Church never accepted.[13] Similarly, adultery was a civil crime because it deprived the husband from having a pure-blooded, rightful descendant. Once again the Church was ahead of its time in condemning the ethos of the society. St. Basil legislated that the same penalty should be issued for abortion as for murder[14], and imposed both to the mother and her accomplices.[15]

Despite the limited freedom of women and the heavy penalties exacted, adultery was not rare in Byzantine society. Nevertheless, it was highly condemned, and in the early centuries of the empire, it was punished with death. Later on, the legislation became more lenient and the penalty was mutilation, cutting off the nose of both guilty parties. The severity of the offence was analogous to the difficulty of the execution of the act. In an environment where women were in seclusion and social life was restricted to the members of the family, extramarital relationships of a woman indicated an immoral character, dangerous for the order of the society. Civil law applied a double standard to adultery: for women, adultery was any extramarital relationship, while men were punished only for engaging in sexual relations with the wife of someone else. A married man’s affair with another woman was called πορνεία (fornication) and was punished only if the woman was unmarried and virtuous. A man could legally engage in physical relations with his own female slaves and concubines, or with prostitutes, but he could not seduce the slave of another man.[16] On the contrary, sexual relationship of a woman, unmarried or not, with her male slaves carried heavy penalties for both parties.[17]

This obvious discrimination of the civil law against women was repeatedly condemned by the Church, but was upheld throughout the length of the Byzantine Empire. Some scholars believe that this attitude had its roots in some metaphysical principles, according to which the person continues living through his descendants, whose genuineness can be affected by infidelity on the part of the woman. Accordingly, female adultery was considered a worse crime than murder because its effects reached into a man’s posthumous posterity[18]. According to Emperor Leo the Wise, this crime affects the life both of the family members and of the offended man’s offspring.[19]

Roman legislation forbade the marriage of a couple that had been condemned for adultery, fearing that such a stipulation might encourage adulterers to murder the woman’s husband, as the last obstacle to enjoying their love.[20] In addition, an adulteress, as a married woman proven guilty by the court, was not allowed to marry anyone else in the future.[21] Because of the peculiar definition of adultery in Roman law, the rule did not apply to guilty men.

Civil law did not allow women to be witnesses in the courts or even admit the adultery for themselves. Only five persons had the right to prosecute the adulteress: the husband, her father, her brother, and two uncles, paternal and maternal.[22] Adultery cases were heard by the civil judicial authorities, while the Church offered a judgment only if the adultery was an impediment to a marriage or the reason for a divorce.[23]

Roman legislation promoted a certain ethical laxity in society by allowing one to have an unlimited number of marriages, contrary to the strong disapproval of the Church. Church canons allow a maximum of three marriages conditioned upon the age of the man: someone with children could not be older than thirty years of age, whereas a childless man could not be older than forty.[24]

Throughout Roman and Byzantine history, the slackening of the social ethos affected the institution of matrimony and gave rise to a high number of cases of what is called “uncontested divorce” (διαζύγιον κατά συναίνεσιν). In a society with loose principles, the spouse had the right to initiate divorce by giving the other spouse a written statement of intent (ἀποστάσιον) in the presence of seven Roman citizens, without any further judicial investigation. This phenomenon is echoed in canonical legislation by the multiple canons that forbid the ordination of men married to these (ἀπολελυμένας) women.[25] The Church through the voice of the Fathers expressed repeatedly her sharp disapproval of this threat to the institution of marriage until the final abandonment of this practice in the tenth century.[26]