Easter on the Holy Mountain

The asceticism in most of the Greek monasteries on the Holy Mountain throughout Lent, which is unimaginable if you’re unprepared for it, even if you’re a believer, reaches the point where, at times, it’s too terrifying to comprehend.

Even on ordinary days, the divine services are, from a worldly point of view, excessively long and unnecessarily frequent, but in Lent they fill almost the whole day and the night, while the restrictions on food reach the absolute limit. During the first week, for example, and during Great Week, only the singers are given a slice of bread once or twice a day- I don’t remember which- so that they’ll have the strength to chant. 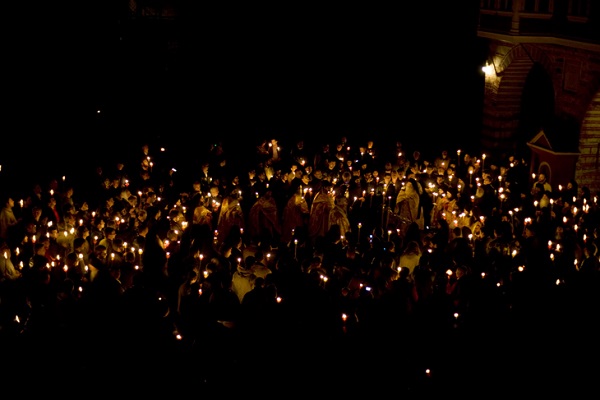 ‘Vegetables and more vegetables’ in the refectories of the monks, horrifying Blagoveshenski [1] (who despite the genuine poverty of his world view, unwittingly wrote a great many truths about the Holy Mountain which are complimentary to those dwelling there). Yet these- actually terrific- vegetables fully justify their existence during the course of the difficult seven weeks.

During this period, everyone on the Holy Mountain becomes involved in the great struggle of the spirit and the flesh, whether they want to or not. Those who manage this more easily have no need to boast, but should acknowledge the grace from above that has enabled them to do so, while those who find it more difficult, because of the pain and tedium, should remember that this pain and this tedium are the state of unbearable coercion we experience almost every moment. This precisely is what true monasticism is, that is voluntary temporal martyrdom for the glory of God. Besides, any lightening of the burden of the abiding habits of the flesh and the unexpected outbursts of spiritual exultation don’t come from us. They’re a prize from above for our efforts or for our support to someone weaker and troubled who’s doing his best to force himself and to submit. Anything pleasant or consoling doesn’t come from us but from God; what we have is everything coercive and self-restricting, that is, unholy… even when we pray. This is the philosophy of the genuine ascetic life.

Even laymen who live for any length of time on the Holy Mountain can experience- not fully but at least in part- all the various moments of sorrow and jubilation, the profound and unusually delicate interweaving of which constitutes the ‘science’ of the monastic life- what the ascetic teachers call the ‘science of sciences’.

At the beginning of the great fast, the Greek monks often greet each other with: ‘I wish you well on your voyage on great sea of Lent’.

And it is, indeed, a great sea. The sea of hunger and sorrow, the sea of weariness and obligatory prayers which your own conscience, you own personal determination will not allow you to neglect unless you’re utterly exhausted. And there are so many hidden ‘reefs’ on this spiritual voyage. In the main church of the Russian monastery there are the two choir stands, behind which there are two small cells. There’s nothing in these cells apart from a lectern with a cross and a Gospel book, and a chair for the spiritual guide to rest on. The doors to these cells open onto an aisle, while their windows look onto the choir stands, the windows being covered with a fine, dark-coloured cloth so that the services can be heard, including the all-night vigils, which last 13-14 hours. The aisles outside these cells are packed with monks deep in mourning, of every age and every stage of spiritual experience. There they wait, impatient to open their souls to the elders.

They go there to confess their every ‘temptation’, to expose their innermost ‘reflections’ or to express their despair, if they haven’t the strength to meet the bodily demands of the fast. Or they may come to confess a momentary regret at having become a monk, a fleeting but painful judgement on monasticism and the strict rule of the Athonite coenobitic monasteries. Or even worse, anger and lack of confidence in the elder himself and his demands. They’ll be given answers with love which comes from great experience, they’ll laugh together a little, the elder will tell them of something similar from his own life or from tradition.

But at the end of the great voyage on this ‘great and turbulent sea’, the harbour is now in sight; the end is nigh to the profound, multi-faceted and mystical struggle between the powerful spirit and the weak and much-suffering flesh.

[1]. Nikolaj Alexandrovich Blagoveshenski (1837-1889) was a Russian writer and artist who travelled to Jerusalem, Greece and the Holy Mountain in order to visit the historical monuments of Orthodoxy (Note by the Russian translator).