Recollections of Great Week on the Holy Mountain

The Great Week of the Passion arrives.

And in honour of Christ, to the glory of God, human efforts become even more intense. The divine services become longer and with shorter intervals between them, food even more frugal, time for sleep and rest even briefer. The moral dictates of the conscience with an ascetic bent become ever more relentless. This is when we see more clearly how strong faith and ascetic training can affect an exhausted body. 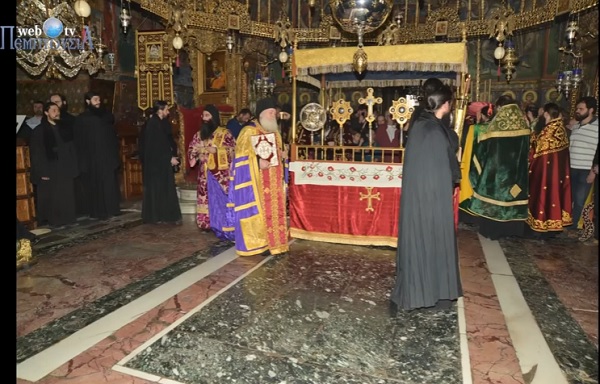 There were a good number of us lay pilgrims to the Holy Mountain back then in 1971: farmers, merchants, priests from Russia. Two or three noblemen, and a couple of young lads who had come from a long way away- one from Moldavia on the Danube and a Greek from Epirus. And the neighbouring Bulgarians who worked in various monasteries also gathered at the Russian one for the long services of Great Week. All these lay people willingly bore the burden of the Great Fast, despite their weaknesses.

On Great Friday, at the all-night Vigil, in the main church, Father Ieronim, the senior Russian spiritual guide, also took part. I’d been on the Mountain for some time, but I’d never seen him officiate. He was very thin and suffered from a variety of ailments which, much to the dismay of the brotherhood, had often nearly been the death of him. He ate very little and spent all day and night hearing ‘revelations’[2], with the permission of the monastery, reading ascetic and also serious secular literature, in order to keep up with modern modes of thought. And, apart from the burden he bore as a person of influence and the spiritual leader of the Russian monastery, he could hardly isolate himself completely from international problems and developments which were, inevitably, reflected on the Holy Mountain, left over from the general complexity of matters in the Ottoman Empire. Because of external pressures, and whether he wanted to or not, Father Ieronim was often obliged to be involved in a great many matters, since, in the eyes of all the Russian monks, he was irreplaceable. This was true, also, of the Abbot, his disciple and spiritual son, the pilgrims, the Russian embassy and consuls, and even other nationalities on the Mountain – Greeks, Bulgarians and Romanians. When would he have had time to officiate at the services and how would he have had the physical strength to do so on a daily basis?

But on these days of the Passion, of atonement, the powerful spirit of the great elder, overcame his exhausted flesh. On Great Friday, we saw Father Ieronim officiating.
All of us were enchanted, we wondered at the vitality which, unexpectedly to us, came from within him, He’d suddenly shed his years, as if he were a young man again. The beautiful, extraordinarily severe and unrelenting face of our greatly esteemed and beloved shepherd shone with something special- triumphant, calm and serious.

With what assurance did he make his way round the church, carefully and unhurriedly censing each group of poor Bulgarian workers. And with what grateful reverence did they bow to him. One of the other pilgrims, a former Army man from Lithuania, observed that, despite his bodily weakness, Fr. Ieronim was much more careful than the other priest-monks when it came to censing those humble people, with their shaved heads, shabby overcoats and peasant-style trousering.

Lest all this seem ‘too simple’ and ‘too easy’, as many will be only too eager to find it, I’d suggest you recall how we’re sometimes burdened, in our body, by the conditions of our brief and- one might say- ‘privileged’ urban fasting: fast food for the whole of one week, listening to the canon, the crush in the church, the hunger and tiredness on the morning of communion. I suggest you recall this example of our paltry secular restraint, this small due which, not always without a spiritual struggle, without ‘temptations’ and querulousness, we pay once, maybe twice a year for the ‘mortification’ of our flesh, which, in any case, is sickly. Sickly, that is, because of illness and age or, even more so, sickly in the Christian sense because of the impatience of youth or because of the numerous sufferings of old age. I’d counsel you to remember also your joy when all of these small spiritual and bodily obstacles have been overcome successfully, when the ‘sacrifice’ has been sacrificed, when we can rest at leisure, break the fast and return to our normal way of life. If we experience joy in our cities, how much more must this be true on Easter Day on the Holy Mountain, where everything is linked to God- sorrow and joy, the fast and the feast thereafter. Spring reigns at this time on the Holy Mountain: at the peak of Athos, in the forests, the snows have long since melted and the trees and bushes which, even at the southern end lose their leaves in the winter, begin once more to be decked in green. Various spring flowers have also been out for a while.

[2] ‘Revelation’ is what they call genuine confession of even the slightest thoughts to the elder without the prayer at the end of confession. It’s simple, but the fullest form of sincerity of the novice towards his spiritual guide, his elder. This is why the spiritual guide can even be an ordinary monk, not necessarily a priest (Author’s note).