‘Whoever observes the whole of the law, but errs in one thing, is guilty of everything’ (Jas. 2, 10). And the damage is unimaginable! You lose eternity, that is, everything. This is what happened to the young man in the Gospel, and is the case with so many others in life. The devil binds people with so many ropes. But whether we’re bound by one rope or another, the fact remains that we’re bound to the devil. Say that the devil’s bound us with a hundred ropes and, through our struggles, we manage to free ourselves of ninety-nine. We’re still not free. We’re still bound, even if it’s only by one rope. To be free of our bonds, we have to cut the hundredth one, and of course, not alone, but with God’s divine assistance. And then, when we’ve cut through them, we should still say that we’re unworthy servants of the Lord (Luke 17,10), as did the unsung Elder, Saint Anthimos Arethiotis, the ascetic of the Monastery of Our Lady, in Retha, Valtos, because humility crowns our every struggle. 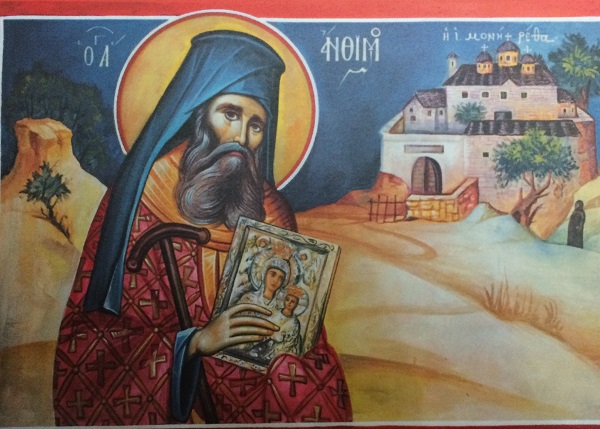 The late Elder Anthimos, as an observer of all the commandments, was free, and had great boldness before God, Who was never slow to grant him any noble desire he expressed through his prayers. He was free of the passions and struggled to retain his freedom, in accordance with the exhortation of Saint Paul: ‘For Christ has set us free into freedom. Stand firm, and do not submit again to the yoke of slavery’ (Gal. 5, 1).

Whenever he needed anything, the angelic Elder Anthimos Arethiotis sensed the answer coming from heaven. When he was working in the furnace of the summer heat, God sent an eagle to fly above him and keep him in the shade. When his bees left and the hives were abandoned, he prayed and in three days the bees had returned. When thieves got into his garden, they were held there by an invisible divine force and had no means of escape, since that power had sealed the garden and allotments.

The generous Elder left no-one from Valtos unaided. He took care of the Easter table for all of them, even the klefts [literally ‘thieves’, but here probably irregular resistance fighters against the Turks. WJL]. One Easter, as was his wont, he designated the lambs and decided where he would give each one. A gang of klefts was hiding out in some high ground and were waiting for the Elder’s gift. When they were separating the lambs, the shepherds noticed that the one destined for the klefts was missing. Later on, he met up with them and told them about it, and the fact that there wasn’t another one left to give them. Deeply saddened, he started to pray and at daybreak on Easter Sunday, the klefts saw the lamb designated for them sitting near them. Heaven had brought it to them so that they, too, could enjoy the Paschal blessing of the Holy Elder.

It’s also worth noting the respect the Elder displayed for Sunday as a day of rest. Not far from the monastery is the village of Ayia Triada [Holy Trinity]. The monastery had land there which they sowed with wheat. When harvest time arrived, everybody arrived one Sunday to work together on the harvest and to glean the stalks. On weekdays, they worked on their own fields. They decided that they would work for the monastery on Sunday. So they told the Elder to come and see the harvest at the threshing-floor. When he saw such a large amount of gleanings, he asked them sternly when they’d managed to bring in such a great store of wheat. When they answered that they’d worked on Sunday, the Elder realized that some sort of demonic energy had moved them to work on the day dedicated to God and that he didn’t have a blessing to take it to the monastery. He went up to the harvest and set it on fire. The villagers, who’d worked so hard to bring in the harvest, were outraged and started to protest and to call upon Our Lady, since they regarded the attitude of the Elder as totally unacceptable. But he was very well aware of his decision and told them to have a little patience. And indeed, when the fire had burned halfway through the stack, there was a deafening bang and the Elder told them: ‘That’s who I wanted to burn: the devil who tricked you into working on a Sunday. The monastery will survive with less wheat. But now that you’ve seen that the devil was hidden in the harvest, you won’t dare to work on the day of rest again’.

Because of the purity of his heart, Saint Anthimos’ prayer was very powerful and had direct access to the risen Christ. During the years when he was abbot of the monastery, it was under threat from Turkish soldiers. On one occasion they arrived on a hot summer’s night. They approached the abbot and told him that they had orders from their superiors to set fire to the monastery. Unshakeable in his faith, he asked them:

‘If you wake up tomorrow morning and all you can see is half a metre of snow, what will you do?’ They were more interested in resting for the evening and would carry out their unholy task in the morning. They mocked him, since the warmth of the summer’s night and the climatic conditions of the region would not allow the merest thought of snow in the middle of summer They didn’t believe that ‘where God so wills, the order of nature is overcome’, and answered that if anything like that happened, they would get up and leave without carrying out the orders they’d been given.

When they woke up the next day- Lord, what a miracle- they saw that not only was it snowing but the snow lay deeper than half a metre. Terrified, they abandoned their plans and left. The monastery had been saved by its holy Elder.

As was his wish, for many years the blessed Elder Anthimos lived in obscurity. His humility knew no bounds. So he asked to be buried outside the door to the church, without a railing around the grave, so that pilgrims who came to Our Lady would walk over him. He lay in his grave for 143 years. On the day of his burial, on the first occasion when his relics were removed and on the second, in 2013, the heavens opened and prevented the faithful from coming to honour his memory. But this rain seemed more like myrrh from heaven, demonstrating God’s pleasure at the Elder’s holy life.

On the day of the translation of his relics, the Elder performed two wondrous signs.

First. The rain was coming down in torrents and although the faithful were sheltered in a large tent that Abbess Filotheï had had the foresight to erect, the priests who were retrieving the bones were exposed to the full force of the rain, as was the whole of the Elder’s grave. And yet none of them became wet, and the pouring rain didn’t fall on the earth of the grave, which would have made it muddy and would have hindered the task of the priests. All the priests and laity who were there have confirmed this, including the dean of the Metropolis, Father Epifanios. With one voice they all glorified God Who is ‘wondrous in His saints’.

Second. The fragrance of the relics, both at the time of their removal from the grave and even more so the next day when it was more powerful, was very moving. On that day, we welcomed the presence of Metropolitan Kosmas of Aitolia and Akarnania, who after the inauguration ceremony at one of the monastery’s chapels, reverenced the fragrant relics.
Elder Anthimos, at rest with the saints, indicated his pleasure and his living presence to all of us there at this unique ceremony, especially at the moment when we kissed the reliquary before leaving. There was an outpouring of fragrance which accompanied us for a good many kilometres on the road away from the historic Monastery of Valtos.