Saint Helen and the Beneficence of Women

a) Women played a decisive role both in spreading the Christian message of the Resurrection as well as in the practical application of the supreme Gospel commandment of love. From the lambent day of the Resurrection of Christ, when the Myrrh-Bearing Women went to the tomb ‘very early’ and heard from the ‘radiant angel’ that ‘He has risen, He is not here’, until our own day and age, women have adorned the calendar of saints, have nurtured saints, have served in the worship of the Church and have led the way in works of benefaction. 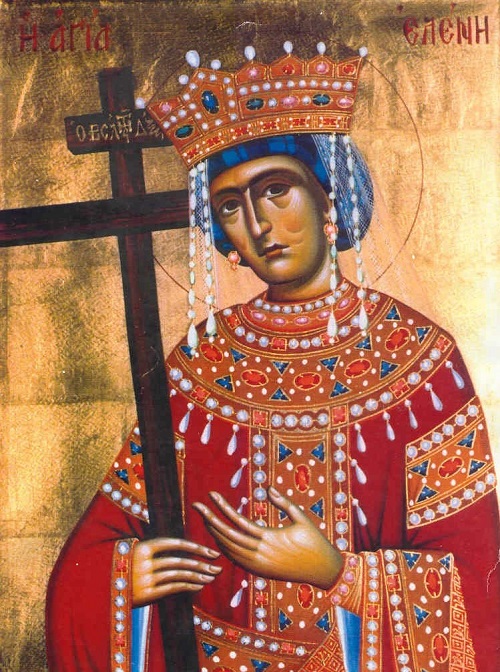 b) The Church honoured women and raised their status morally. From being chattels and possessions men, the Church regarded them as human persons made in the image of God, with their own particular gifts. This truth is of great interest, if we but remember that one of the great sages of antiquity Thales the Milesian, influenced as he was by the general climate of disdain towards women in his time, considered himself lucky with regard to three things: first that he was human rather than a beast; second that he was a man rather than a woman; and third that he was Greek rather than barbarian.

c) Moreover, in the Gospels themselves, we see Christ protecting the adulteress, accepting the repentance of the harlot, speaking of sublime theological matters with the Samaritan woman, and having with Him female disciples who were the first to be entrusted with spreading the joyful tidings of the Resurrection. Thereafter, the Fathers protected women against unfair legislation and appointed them to a variety of assignments.

d) Mention is made, for example of the deaconess, Olympiada, who served in Constantinople, became a close associate of Saint John Chrysostom on social issues and devoted the larger part of her wealth to good works. Imitating and following the women disciples of Christ, who served Him by utilizing their possessions, Olympiada took care of Saint John and those working with him.

e) Saint Helen, the mother of Constantine the Great, whom the Church commemorates on 21 May, was also involved in similar social work. From the testimony preserved by the historian Eusebius, it appears that Saint Helen was particularly magnanimous and generous. To some she gave money, provided others with the clothing they needed, looked after the impoverished, the naked and military veterans. Some she caused to be released from prison or from the wretched conditions in the mines, others she freed from oppression, and others again she recalled from exile.

f) Saint Helen’s contribution to the construction and decoration of Christian churches in Jerusalem and also in Bethlehem was also important. According the calendar of the saints, Saint Helen searched for, and found the Lord’s Cross on dread Golgotha. This was an event which caused great rejoicing. Tradition has it that, when she was sailing back to Constantinople with the larger portion of the Precious Cross, she called in at the island of Cyprus, where she founded the Monastery of Stavrovouni. She left part of the Precious Cross in Jerusalem, brought another to Constantinople, and, according to Saint Cyril of Jerusalem, the rest was divided and sent to other areas of the world.

g) With the help of Constantine the Great, Saint Helen continued the Apostolic tradition of looking after the indigent and those in dire straits well into her old age, bequeathing the custom to her successors. Thus, women in every era have worked together with men towards the practical application of the commandment of love. This is still happening today, with thousands of women engaged in the social mission of the Church. There is a double benefit to this. On the one hand, the weakest members of society are given assistance and, on the other, the women are provided with opportunities to validate their daily lives, to escape from isolation and to grow psychologically and spiritually.